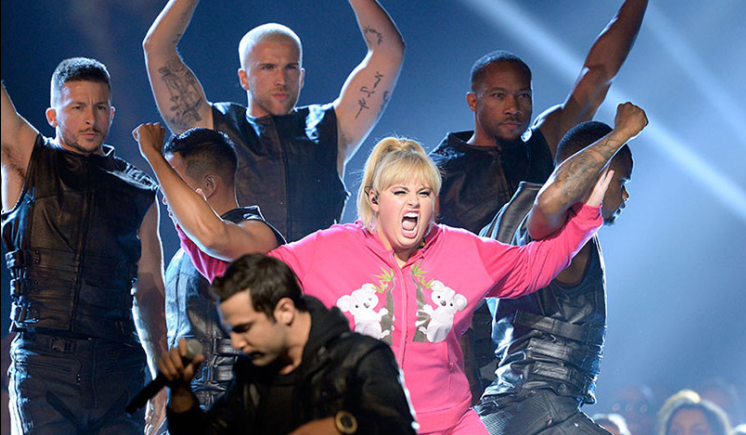 Last night, the MTV Movie Awards took over airwaves and social graphs across the country. Simulcasted across various Viacom networks, the show was fueled by scripted and unscripted moments to keep Gen Y viewers watching and get them talking. Today, 20-year-old Youth Advisory Board member Rachel Voorhees gives us the Millennial perspective on last night’s show: what resonated, and how celebrities who made greater causes a part of their presence were the ones who stayed memorable.

Thought award show season was over? Well, think again. MTV finished it off last night with their 21st annual Movie Awards and it certainly was a night to remember.

Having Pitch Perfect star Rebel Wilson host was a fresh take for this year’s ceremony, especially since she was nominated for the ”Best Female Performance” and “Breakthrough Performance” awards last night as well. The show opened with a video clip of her and actor James Franco in Australia as Rebel learns that she has been chosen to host the show. After climbing into what looks like a Transformers suit, Rebel “flies” to the venue for the awards. Suddenly, we’re catapulted back into real time where Rebel is joined by her Pitch Perfect cast mates for a lively opening number. Millennial viewers loved Pitch Perfect, so starting off the show with the cast performing a mash-up of popular songs like “Thrift Shop,” “Girl on Fire,” and “Lose Yourself,” definitely hooked the audience, and MTV played pop culture-curator well.

MTV Puts the Audience In Charge

One thing I love about the MTV Movie Awards is that MTV puts the audience in charge of picking the winners! All nominees were listed online a few weeks prior to the show so that viewers could vote for their favorites in categories like, “Best WTF Moment,” “Best Shirtless Performance,” and “Best Scared as S**t Moment.” The unconventional categories are a big part of what makes the show so interesting, and I always love fan-powered award shows because it allows our powerful voices to shine through.

Many nominees for awards last night were strong young actresses like Jennifer Lawrence and Quevenzhané Wallis who have had a breakthrough year with their performances. Emma Watson was honored with the “Trailblazer Award” for her excellence in the roles that she’s played so far in her career. During her acceptance speech, Watson talked about being teased as a child for being a go-getter, but that all of it was worth it because of where she is today. She spoke to Millennials as she said that becoming who you are is a process. As a Millennial woman herself, she is definitely a role model to the rest of us.

Stars Use Their Onscreen Moment to Raise Awareness

Though it was an award show, awards weren’t the only things being given out. Several celebrities used their time on stage to raise awareness about current issues and send positive messages to the Millennial audience. Jamie Foxx was one of these celebrities. As he accepted the “Generation Award” for his exceptional work throughout his career, Foxx donned a Trayvon Martin shirt as a subtle way of reminding the audience that justice has not been reached.

Bradley Cooper, who won several awards for Silver Linings Playbook last night, also took the time to call attention to a larger issue, talking about the need for programs to help young men and women who suffer from post-traumatic stress disorder. I took that as a call to Millennials to take action as we are the generation next in line to change the world.

Lastly, Rebel Wilson took a different approach to raising awareness about a prominent issue in today’s society: body image. While some were a bit taken aback by her crude humor, the message was clear. Wilson serves as an example to young people that it’s okay to be who you are and love it. I think her lighthearted approach was appropriate for the audience as they were able to laugh and have the message still sink in.

All in all, I think this year’s MTV Movie Awards was just the right mix of comedy and intellect. By the end of the show the audience was feeling inspired (and totally excited for the next Hunger Games movie thanks to the preview) and it was an entertaining evening for Millennial viewers!

Rachel is currently a Communications student at Adelphi University with a concentration in Journalism. After she graduates she plans to work in media, specifically for music promotions and/or non-profit. In her free time, you can catch Rachel singing and dancing with friends at a concert in New York City or doing volunteer work. She has a serious passion for pop culture and raising awareness about social issues both locally and globally. With her writing, Rachel hopes to keep readers informed about what’s happening in pop culture and how they can volunteer their time to a worthy cause. To learn more about Rachel, check out www.rachelvoorhees.net.