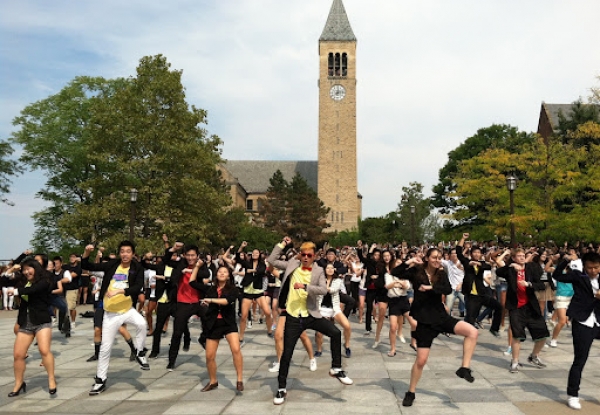 Whereas previous generations may have watched music videos passively on their TV screens, Millennials are active audiences who engage and respond to content. They’re often behind artists’ social buzz and they seek to be involved in the creation and sharing of videos. Millennials’ habits reflect the increasingly close relationship between artists and fans, and they seek to share content as social currency. To reflect this growing trend, MTV even added the Most Share-Worthy Category to the Video Music Awards last year. Brands who want to reach Gen Y should pay attention to their online behavior and how artists are adapting their content to better connect with them.

“Gangnam Style” best reflects this shift as it’s the most watched YouTube video ever with more than one billion views. Millennials shared the Kpop hit all across their network and helped propel the song to greater relevancy in pop culture. They were quick to learn the dance — 68% of teens say they know it — as well as make and share parodies. The song’s social buzz is why Psy has become a household name and his viral success exemplifies how many stars launch to fame today with the help of their fans.

Carly Rae Jepsen also has a similar story with “Call Me Maybe.” The song immediately became a trending topic on Twitter last February after Justin Bieber posted a video he made to the song along with other teen stars including Selena Gomez and Ashley Tisdale. The earworm quickly achieved attention among youth and older adults alike. Everyone from celebrities and Olympic athletes to regular fans and Cookie Monster made their own video and it became a shared experience as each video took over the Web.

But beyond these well-known videos that have topped the social charts, the nature of music videos is changing to further incorporate fans. Last year, British singer Ellie Goulding released a music video made entirely of her fans’ Instagram photos. Crowdsourcing music videos isn’t entirely new, but we expect it to catch on more as fans want to be part of the creative process and share their connection to songs. Linkin Park took this approach one step further with its video for Lost in the Echo, where fans can personalize their viewing experience with their Facebook pictures in the storyline. Think of it as a music video starring you! Other artists, including Tim McGraw, are inviting fans to see how they make their music videos as they record them. Through this approach, artists can offer fans a backstage pass into their lives and build excitement for the music video as fans were there for the process.

We’re also seeing music videos being taken to the next level thanks to impressive technology. Fans can view Matchbox Twenty’s video for “She’s So Mean”, from any angle and switch throughout the song. Similarly, Miranda Lambert released an interactive video where fans can control the angles, unlock behind the scenes content, and more. These approaches heighten the traditional experience of watching a music video and allow fans to feel a close connection to the artist.

Moreover, in today’s digital age, teen fans view the debut of a music video as an event experience. Not surprisingly, One Direction immediately became a trending topic on Twitter after the video for its song “Kiss You” was posted on Vevo. The Web was buzzing as sneak peaks were released and when the entire video debuted, fans were eager to analyze every clip, pick up on inside jokes aimed at loyal Directioners, and share their love of it on social media. Marketers should recognize these strategies that appeal to consumers in focusing on co-creation and sharable content.