3 Stats Show That Young Europeans Have Mass Merch Mentality, Too 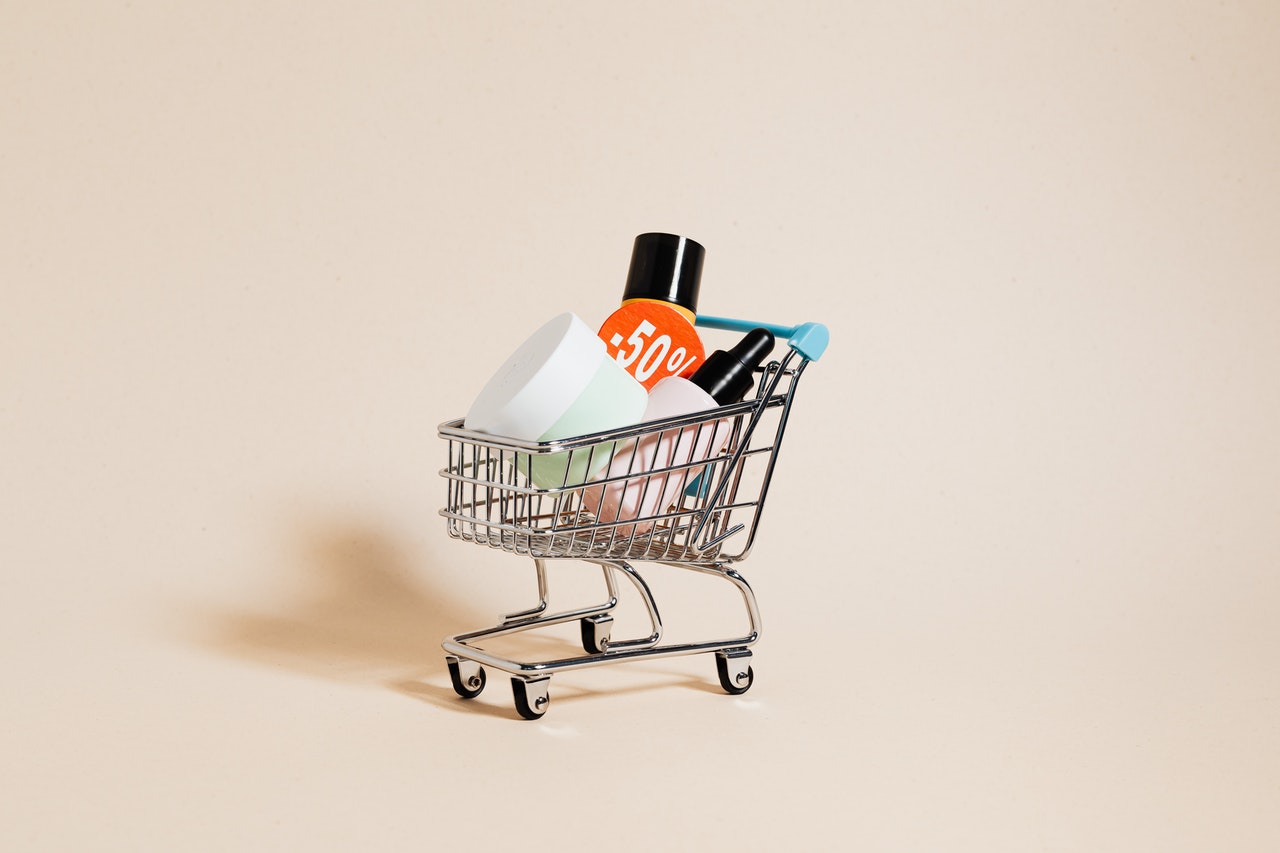 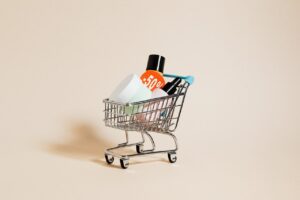 Big box stores may sound like a purely American phenomenon. But these three stats show that mass merch retailers are shaping young Europeans’ shopping habits, too…

Big box stores are a decidedly American creation and cultural mainstay. But while it might be assumed that mass merch shopping behaviors wouldn’t impact young consumers in Western Europe, the reality looks a little different. Sure, there’s no Walmart or Target, and two significant factors contributing to the growth of big box stores in the U.S.—acres of space and a strong car culture—aren’t as prevalent in Western Europe. But with the likes of Amazon and retailers such as Primark and Asda providing affordable and accessible everything to these gens, mass merch has unquestionably made its way into Western European life, and altered young Europeans’ view of shopping.

YPulse explored this topic in-depth in our recent WE Mass Merch Mentality trend report, which dives into how growing up with mass merch has reshaped young people’s shopping preferences, how these preferences are changing the rules of retail, and how they view these brands. And while our report found that mass merch shopping isn’t quite as big in Western Europe as it is in North America, we also found that young Europeans aren’t turning their noses up at it either. Here are three stats that paint the picture of young Europeans’ mass merch mentality: 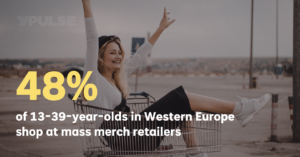 Nearly half of young Europeans shop at mass merch retailers

When we ask young Europeans what type of stores they shop for clothing, beauty products, and home goods, their top response is specialty stores such as H&M and Zara, with 64% saying they shop at these types of retailers. But in second place—and beating out every other type of store—is mass merch retailers. This means big box shopping isn’t quite as popular in Western Europe as it is in North America, where 61% of 13-39-year-olds say they shop at mass merch retailers, making it their No. 1 shopping destination. But considering big box is a relatively new concept in Western Europe, the fact that half of Gen Z and Millennials in the region have taken to shopping at these stores isn’t insignificant. Millennials are even more likely to say they shop at mass merch retailers (51%) compared to Gen Z (40%), as are young Spanish consumers (53%). 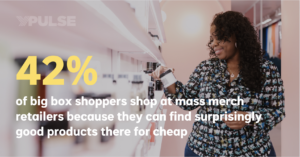 While affordability and convenience are the top reasons young European big box shoppers cite for shopping at mass merch retailers, they also say they’re turning to these types of stores because they like what they find there: 42% say they shop mass merch because they can find surprisingly good products there for cheap, and 31% say it’s because these retailers have the clothes they like. What’s more, when asked what types of stores sell products they want to buy, 40% say mass merch stores, coming in second after specialty stores (63%). In other words, while affordability is a big draw for young Europeans, big box shopping is about more than just cost; it’s about style, too. This is probably the most important thing for older generations to understand: young people aren’t shopping big box strictly out of necessity. Instead, big box stores have excelled at honing in on the trends Gen Z and Millennials care about most, from fashion to home goods to beauty, and creating products that these consumers actually want to buy. And almost half already think that these are cool places to shop: 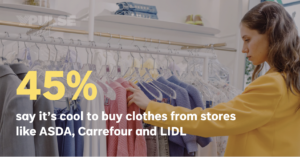 While it’s not the majority, almost half of of young Europeans agree that mass merch retailers are cool places to buy clothes. This isn’t as high as young North Americans, three-quarters of whom say these stores are cool. Young Europeans also say that if price didn’t matter, they wouldn’t be shopping at mass merch retailers, underscoring these stores’ lower cool ranking among these gens. But that doesn’t mean these stores aren’t becoming more cool. After all, when we ask what kinds of products they typically buy, “trendy” and “cool” and two of their top answers—and since half of young Europeans are shopping at big box stores, they must be getting some of these cool and trendy products there. Meanwhile, growing up with mass merch retailers has recalibrated young consumers’ ideas of price, making clothing over €37 feel expensive to the vast majority of young Europeans. Now, over half say that it’s more of a brag to talk about how cheap you bought something for rather than how expensive you bought something for, turning affordability into a source of pride instead of shame. As this mindset continues to take hold among young Europeans—and as mass merch shopping continues to go mainstream in the region—it’s likely that big box stores will start to win more cool points among these gens.