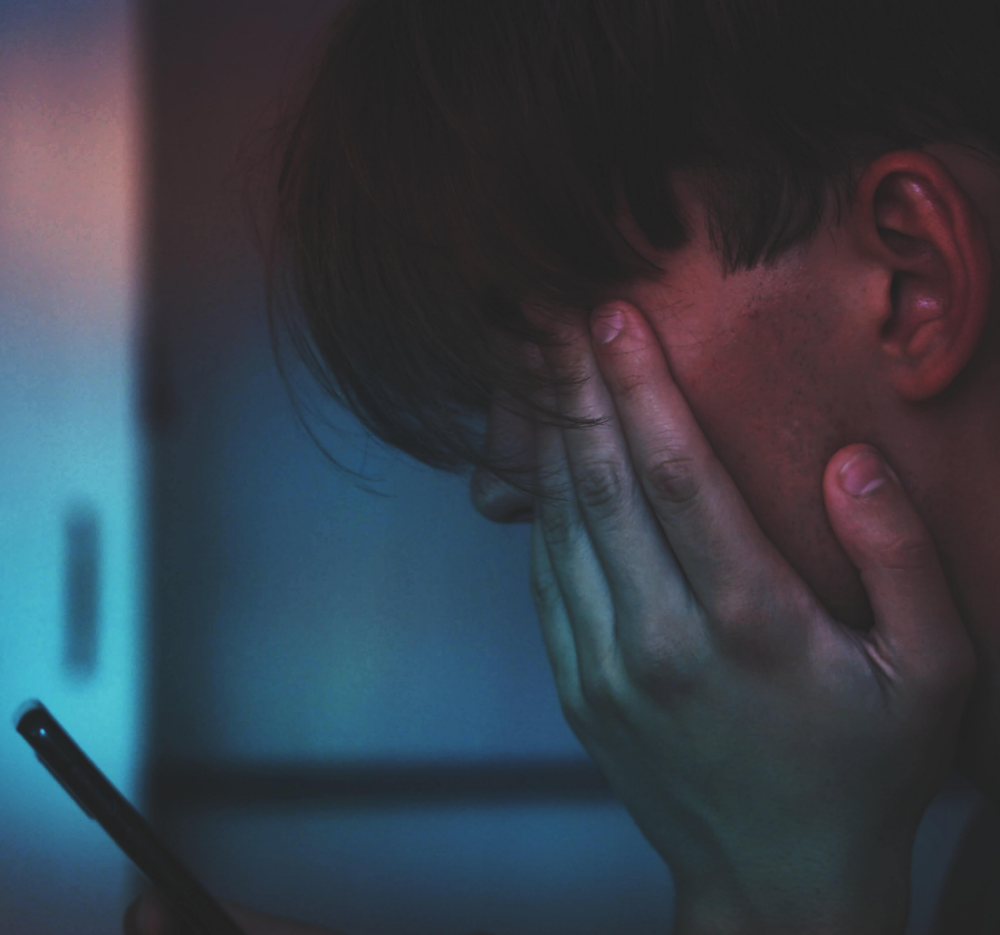 May is Mental Health Awareness Month, and LGBTQ+ young consumers have different needs when it comes to mental health support…

We told you that the number of Gen Z who identify as LGBTQ+ continues to grow, and their needs are different compared to their non-LGBTQ+ counterparts. One major difference that YPulse’s data has uncovered is that LGBTQ+ youth are far more likely to be struggling with mental health than their non-LGBTQ+ peers. Though these generations are growing up with more acceptance and openness around their sexual identities than previous, there are many, many obstacles they still face, and their mental wellness reflects these burdens. For Mental Health Awareness Month, we’re highlighting three stats from our recent Mental Health behavioral survey to show how LGBTQ+ youth are feeling, and what they’re looking for when it comes to mental wellness: 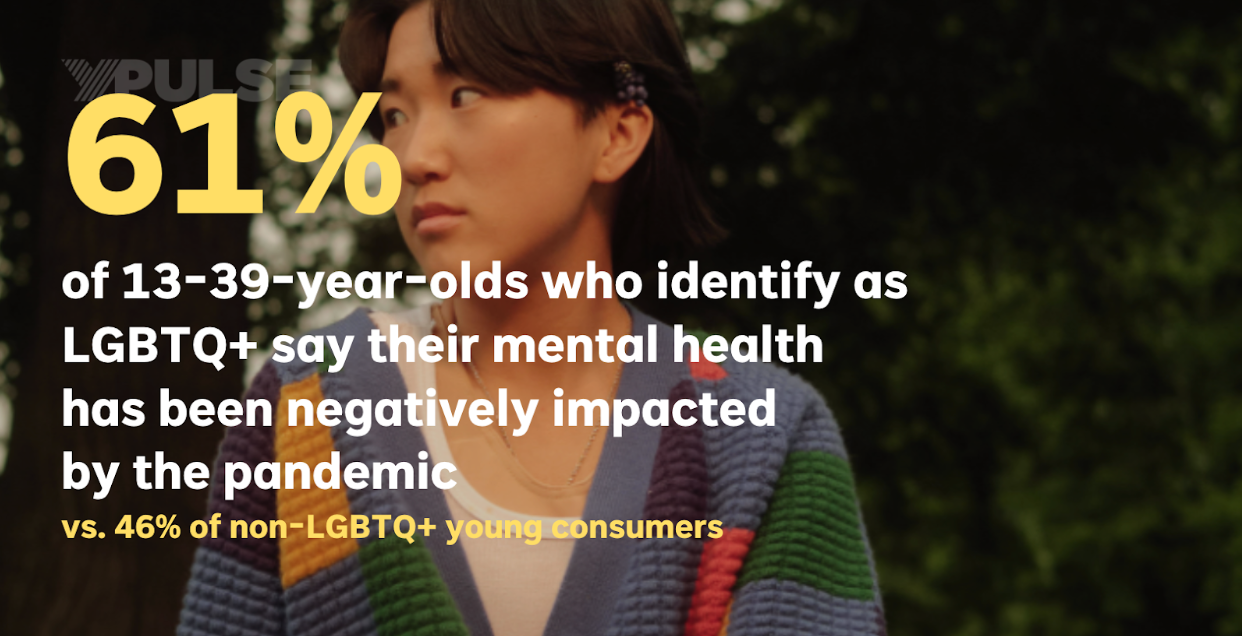 LGBTQ+ young consumers’ are more likely to say their mental health has been negatively impacted by the pandemic.
There’s no question that many young people have faced mental health setbacks because of the last two years of the COVID crisis. YPulse’s recent mental health report found that half of 13-39-year-olds say their mental health has been negatively impacted by the pandemic. Meanwhile, a nationwide CDC survey shows that during the first half of 2021, 44.2% of teens describe persistent feelings of sadness or hopelessness that kept them from participating in normal activities, with 9% reporting a suicide attempt.  But our data shows that 61% of 13-39-year-olds who identify as LGBTQ+ say their mental health has been negatively impacted by the pandemic, compared to 46% of non-LGBTQ+ young consumers. Our behavioral data also shows that burnout is higher among LGBTQ+ youth: 89% of LGBTQ+ young consumers have felt burnt out compared to 80% of non-LGBTQ+ young consumers. The reality is that LGBTQ+ young people are already more likely to feel isolated and unable to find a community, and the pandemic exacerbated this issue. In addition, for those not supported by their families, quarantines could have forced even more time with relatives who reject or even mistreat them. Other research, including a nationwide CDC survey, found “higher levels” of vulnerability among LGBTQ students, with worse mental health and more suicide attempts. Nearly half of LGBTQ+ teens reported they considered suicide during the pandemic, while a 2020 study found that transgender youth are “twice as likely” to express depressive symptoms and consider or attempt suicide. Because of the increased vulnerability among this population, LGBTQ+ young consumers are also more likely to be seeking out individual help and support… 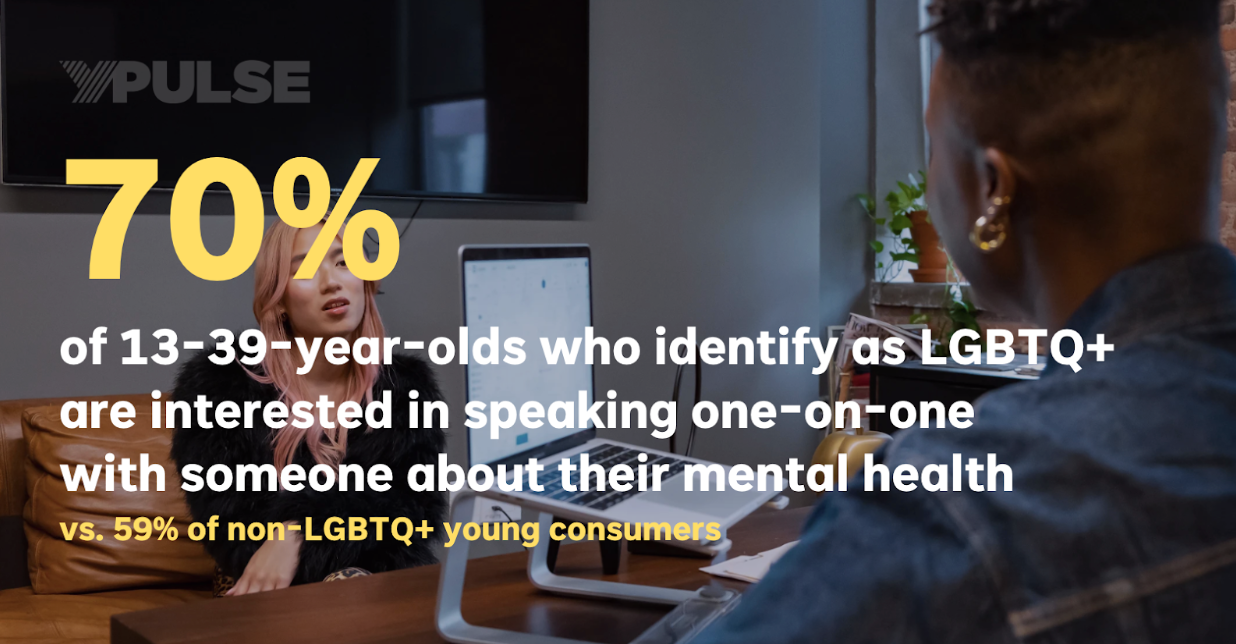 The majority of LGBTQ+ young consumers want to speak to someone about their mental health.
Sixty-two percent of 13-39-year-olds overall tell us they are interested in speaking one-on-one with someone about their mental health—but that number is even higher among LGBTQ+ youth. In fact, 70% of LGBTQ+ young consumers tell us they are interested in doing so compared to 59% of non-LGBTQ+ young consumers. Our research also shows that 43% of LGBTQ+ young consumers are interested in doing individual therapy compared to 36% of non-LGBTQ+ young consumers. Accessing therapy can be difficult for some, and in recent years, BIPOC and queer therapists of color have joined TikTok to connect with these populations to address problems they’re going through, and even giving them tips on how to find the right therapist for them. Some private practices in the country also specialize in working with underrepresented and misunderstood populations. For instance, Magnolia Wellness works with BIPOC and LGBTQ+ patients who have experienced trauma through specialized treatments and practices including sound therapy and other psychotherapy techniques to provide a well-rounded healing experience. Teen Vogue reported that LGBTQ+ college students often have to face questions about gender, sexuality, identity, and acceptance, and educational institutions need to make sure that queer and trans students have the resources they need, from individual therapy to support groups. According to nonprofit The Trevor Project, which runs suicide prevention efforts for LGBTQ+ youth through providing 24/7 crisis support services, 786 of their counselors fielded over 150 “crisis contacts” in the last year, with nearly half of those calls coming from people under the age of 18, and over a third were from people of color. One of the things that has helped the nonprofit organization thrive is help from their brand partners, including Google, YouTube, Macy’s, Procter & Gamble, Harry’s, and Abercrombie & Fitch, which have kept their work funded. The group’s work has proven to be an asset for companies who want to demonstrate to the LGBTQ+ community that “their corporate hearts are in the right place”—and donating to, or collaborating with a nonprofit organization like The Trevor Project can ensure that LGBTQ+ youth are getting the individual support they need. But while therapy, of course, is important to LGBTQ+ young consumers, they’re also more likely to want products to help them cope with anxiety and stress… 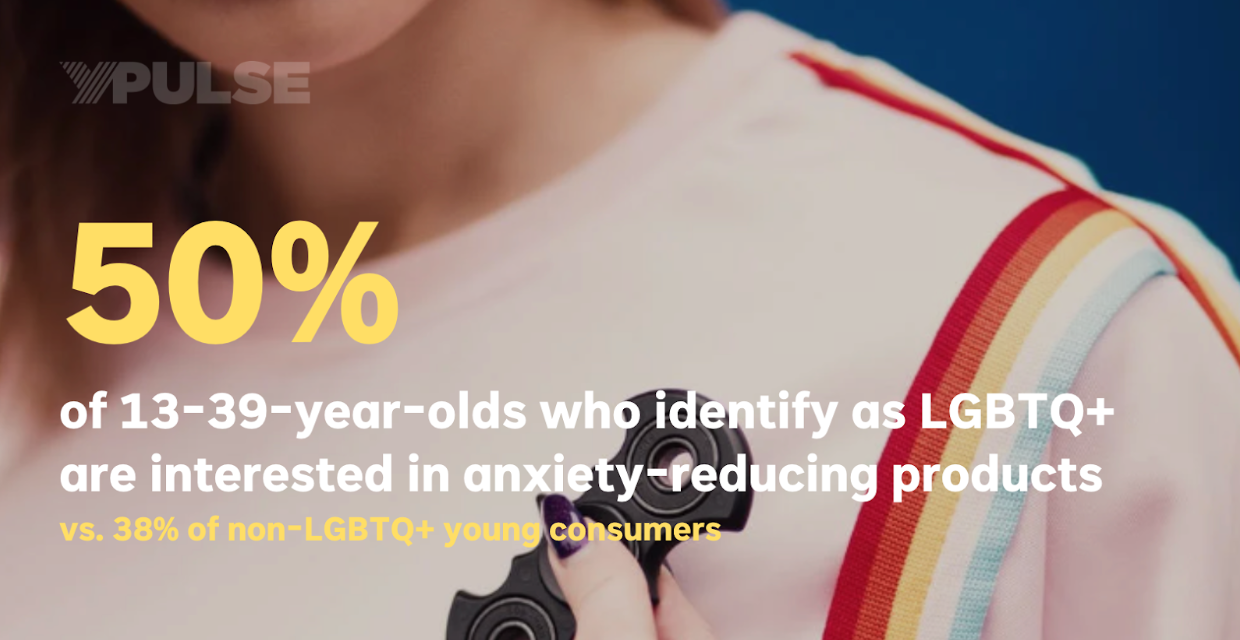 Half of LGBTQ+ young consumers want anxiety-reducing products.
Two in five young consumers tell us they’re interested in anxiety-reducing products, but the significance is massive among LGBTQ+ young consumers and non-LGBTQ+ young consumers. Half of LGBTQ+ young consumers say they are interested in anxiety-reducing products compared to 38% of non-LGBTQ+ young consumers. While we’ve told you about the various ways brands have tapped into the anxiety products, whether through pizza-themed weighted blankets or launching beverage-focused spa kits, some brands are specifically reaching LGBTQ+ youth. When we spoke with Squishmallows co-president Jonathan Kelly last year, he told us that their soft, cuddly toys have helped young people cope with stress and anxiety—and because their fan base is diverse and inclusive, they have added “more non-binary characters while identifying more ways to respectfully represent the LGBTQ+ community in the Squishmallows line.” However, fidget spinners, weighted blankets, and stuffed animals aren’t the only type of things that LGBTQ+ young people turn to for stress relief, holistic products like CBD, probiotics, or melatonin are also desired. Our research found that 42% of LGBTQ+ young consumers have tried holistic remedies compared to 31% of non-LGBTQ+ young consumers. Black and LGBTQ-owned CBD lifestyle brand Unoia launched recently to reach customers from all backgrounds, but they especially wanted to reach BIPOC and LGBTQ+ customers. Co-founder Danielle Gray told Healthline that she felt “responsible for making it [their] mission to talk about mental wellness.” While the brand sells CBD, they also offer printed materials that cover topics on CBD and lean heavily on social media to connect and check-in with their followers (which they refer to as their “community of beautiful thinkers.”) They also offer a live series on Instagram that teaches viewers how to integrate CBD into their lives. Overall, more brands are starting to support LGBTQ+ youth year-round by making products like this their focus.

North America
7 Ways Brands Are Authentically Supporting LGBTQ+ Youth—Beyond Advertising
From podcasts to inclusive social media campaigns, here’s seven brands supporting L...
Western Europe
Are Young Europeans Into the Mystical and Magical?
From tarot to crystals to astrology, young Europeans are turning to the supernatura...
North America
Travel and Outdoors Report
As the travel industry recovers, Gen Z and Millennials are ready to release their pent-...