How Young Europeans Are Supporting The Causes They Believe In, in 3 Charts 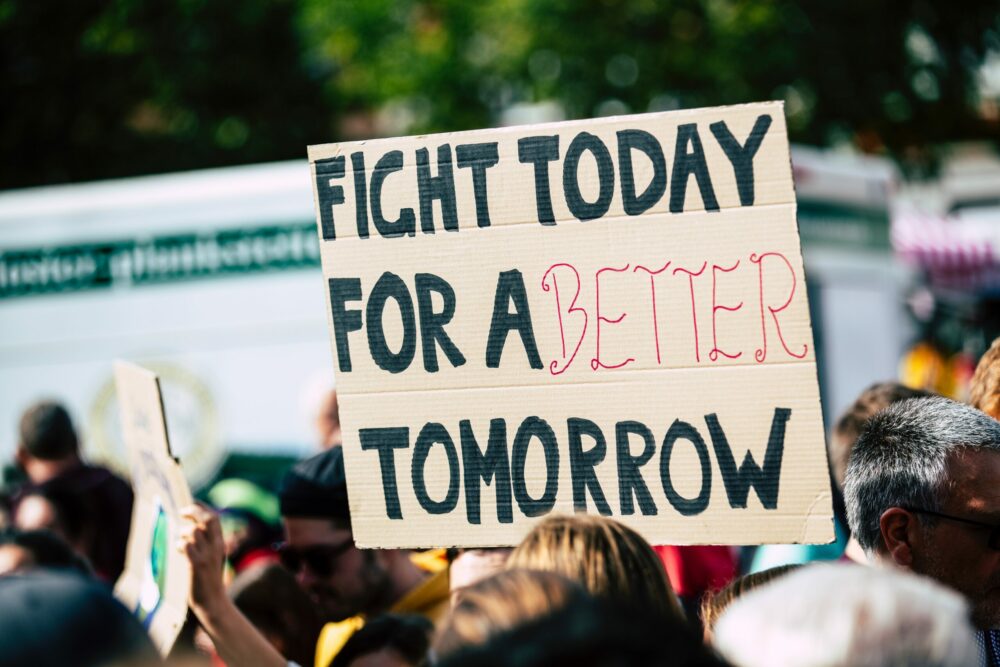 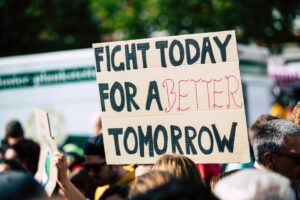 The vast majority of Gen Z and Millennials in Western Europe say they support at least one social cause. But what does activism look like today?

We’ve long known that Gen Z and Millennials are generations of activists (and that they’re only getting more activated), and now we know that the same is true in Western Europe, too. In our recent WE Causes / Charity and Activism report, YPulse found that 95% of young Europeans are passionate about at least one cause, and research shows that the pandemic upped the importance of social causes among these gens as long standing inequities and broken social structures were brought to light in new ways. A report from the European Funding Foundation found that online petitions skyrocketed in Western Europe in the wake of the pandemic, with the number of petitions initiated online growing significantly. While this is likely in part due to the fact that most campaigning had to go digital, it also shows that when an issue needs attention, young Europeans (like their North American counterparts) will find a way to fight for what they believe in.

So how are they showing their support the most? In our recent survey, we asked young Europeans to tell us what they’ve done to champion a cause. Here’s what we found: 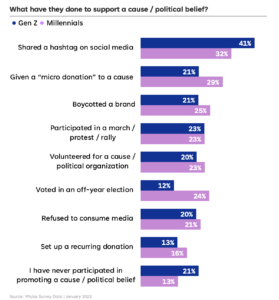 The vast majority of young Europeans say they’ve taken some action to support a cause or belief, but the top way they’re taking a stance is (you guessed it) via social media. While Gen Z and Millennials’ social media-fueled activism was once labeled “slacktivism,” these days, social media has emerged as a vehicle for real change, especially among Gen Z. More than two in five 13-20-year-olds have shared a hashtag on social media to support a cause they believe in, far outranking their next top action of participating in a protest (23%). Millennials are less likely to say they’ve shared a hashtag and far more likely to say they’ve given a micro-donation to support a cause, but even among the older generation, social media is the top way they’re letting their voices be heard. And, unsurprisingly, both gens are increasingly turning to the app that has quickly become a Gen Z and Millennial mainstay: TikTok. As a researcher told the New York Times, identity has become “front-and-center” among young people on TikTok compared to other social media platforms, and the app naturally lends itself to rallying around social issues—and calling out inequalities. Issues like Black Lives Matter, climate change, reproductive rights, and LGBTQ+ rights have filled young people’s feeds, and viral posts on these topics have forced major organizations and brands (including TikTok itself) to publicly right their wrongs. As young users continue organizing on the app to create real-world change, the power TikTok has to influence politics and social justice is being fully realized.

But young Europeans aren’t only turning to TikTok and other social platforms. In addition to micro-donations, more than one in five Millennials are also showing their support by participating in marches, volunteering for organizations, voting in off-year elections, and refusing to consume media. But their money is doing some work in other ways, too: 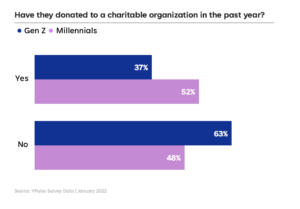 The majority of Millennials and nearly two in five Gen Z have donated money to a charitable organization in the past year, proving that young Europeans are willing to put their money where their hashtag is. What’s more, charitable giving went up at the start of the pandemic in some parts of Western Europe, with household donations in the U.K. in 2020 increasing to an estimated £11.3 billion, up from £10.6 billion in 2019, according to U.K. Giving. Meanwhile, charitable donations reached record highs in Germany in 2020, and remained steady in Spain. The first year was a hard one financially for young Europeans, with many losing their jobs and worrying about their financial futures. But even in this climate, many made sure to financially support the causes they believe in. Gen Z, of course, is likely to have donated money to a cause because the younger gen is still getting their financial footing. But with 37% already giving, it’s clear that Gen Z will continue to donate, too.

Young Europeans’ money is talking in other ways, too: 25% of Millennials and 21% of Gen Z say they’ve boycotted a brand that went against their beliefs. And more than boycotting, they’re also supporting the brands they believe in: 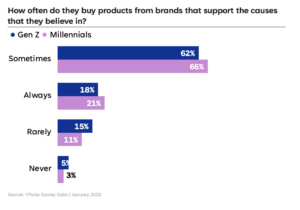 Eighty percent of Gen Z and 87% of Millennials say they sometimes or always spend on brands that support the causes they care about, underscoring what YPulse has been saying for a while now: championing the causes young consumers care about is a major way for brands to win their affinity and dollars—and going against those causes could get a brand canceled. Our survey shows that nearly four in five young Europeans believe all brands should do some good in the world. But as much as these gens believe in the power of a hashtag, brands need to do a lot more to win their support. More than four in five Gen Z and Millennials in Western Europe say that if a brand voices support for a social issue they also need to make an active effort to help that cause, whether by giving money, raising awareness, or starting a fund—and that’s what will make them buy from a brand.