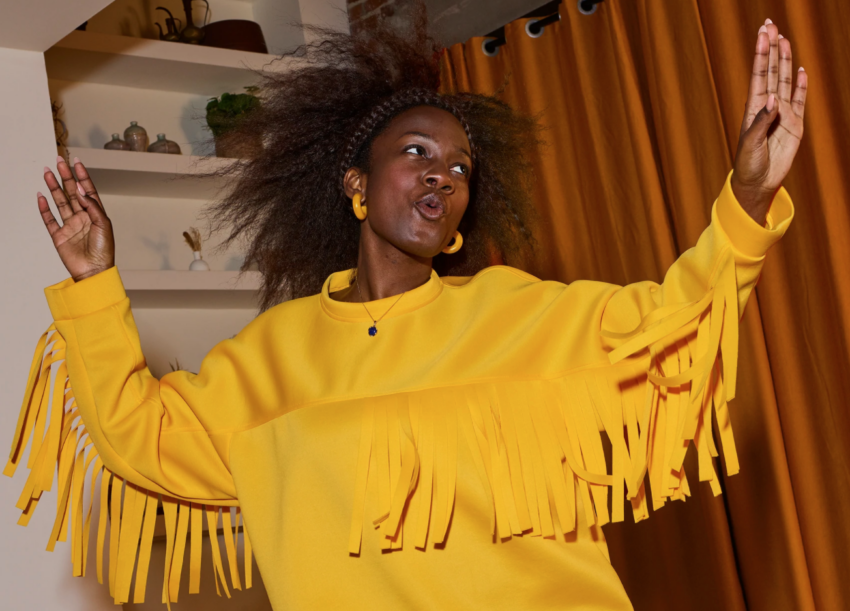 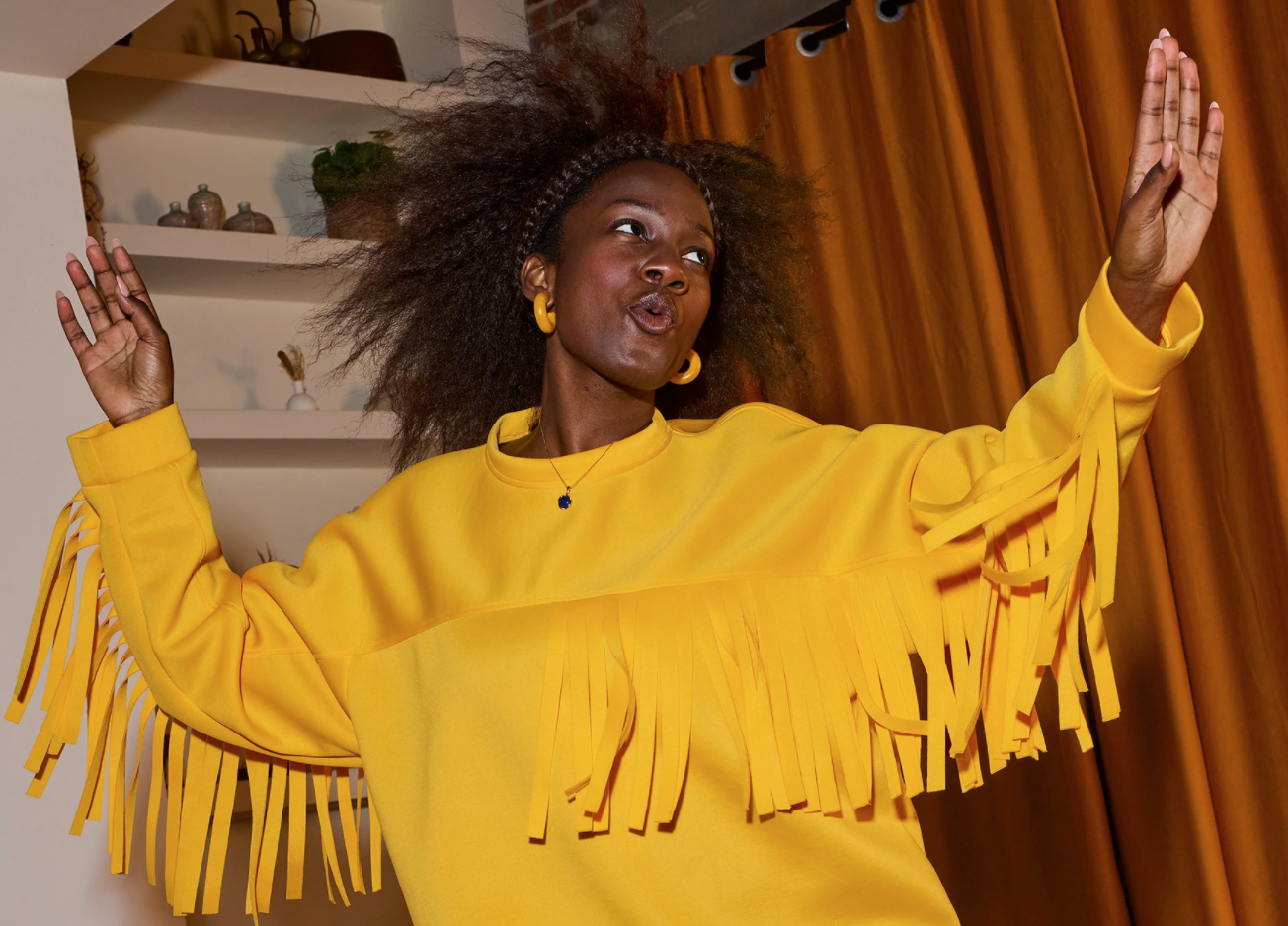 From a deli-meat face mask to scented sweatsuits, these are some of the unexpected branded products that have recently sold out…

For some time, YPulse has been tracking the increasing popularity of weird marketing, which has been wholly embraced by young consumers raised on absurdist humor. While the trend started out with the odd bizarre commercial and offbeat social media content, in recent years brands’ intentional eccentricity has taken the form of branded merch that ranges from silly to wacky–and it seems the odder the offering the more in-demand it will be. Last summer, we told you about some of the most-talked about branded products, which included McDonald’s McNugget pillow and Budweiser’s turkey stand. These surprising products do seem to follow a formula of some sort: a brand creates a product in a category that feels completely unrelated to their usual offerings (usually in the home, beauty, or fashion realm), somehow including a hint of the products they’re best known for through design, or, more often than you’d think, scent. But aside from that, there’s another thing these products have in common: they all seem to not only sell out, but sell out fast.

YPulse’s Future of Experiences trend research found that 43% of 13-39-year-olds say they have purchased a special edition / limited release item from a brand, and clearly some are snatching up the unusual “available for a limited time” products to experience the brands they like in a new way–or just for the fun of it all. Not far into 2022, it’s clear that weird marketing is still as popular as ever, and brands are ramping up just how weird they can make their products to continue reaching young consumers. Here are five recent limited-edition branded products that launched in recent months and were snapped up just as quickly as they were dropped: 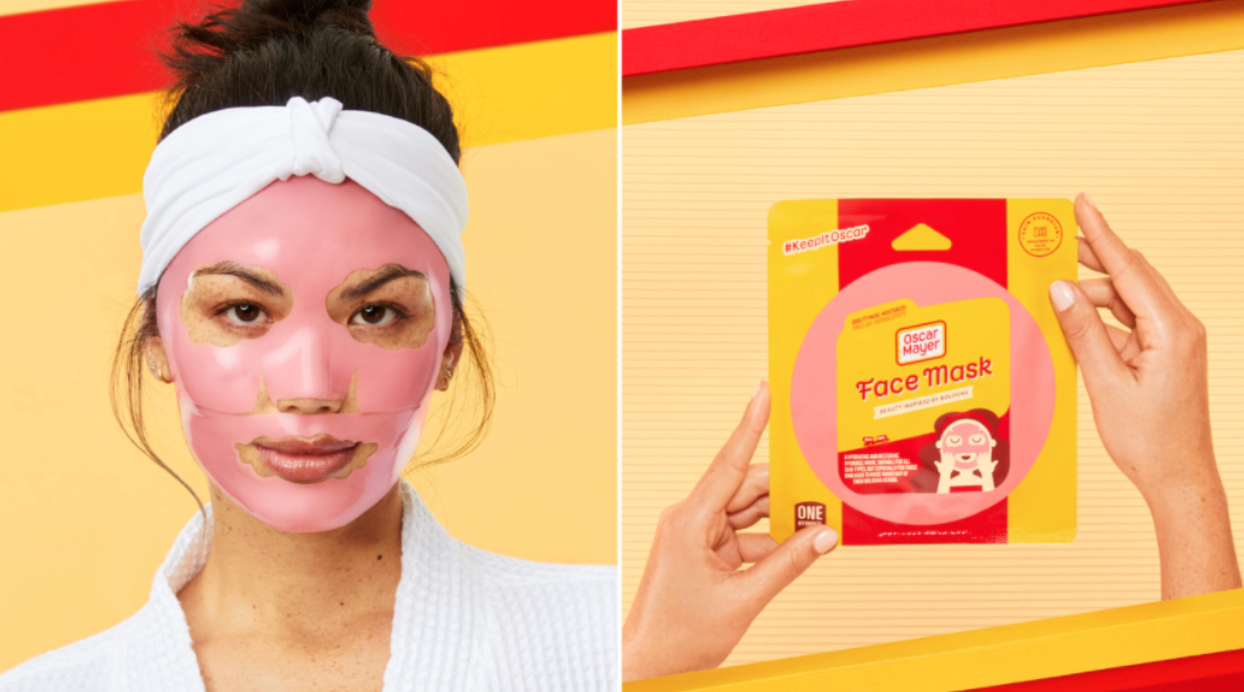 Oscar Mayer’s Bologna Face Mask
In January, this iconic meat and cold cut company entered the beauty space, with their very own bologna face mask. (You read that right!) The Kraft Heinz-brand partnered with Korean beauty and skincare company Seoul Mamas to create the deli meat-inspired product, which utilized witch hazel botanicals and seaweed-derived ingredients to protect, hydrate, and promote skin elasticity, but looked like, well, bologna with some eye and mouth holes bitten out of it. Be warned: the bologna-inspired face mask isn’t actually edible—and there’s a large warning on the packaging that states: “Do not eat bologna masks” if you don’t believe us. Less than a day after being released, the product was sold out on Amazon and was the number one new release on the site’s beauty and personal care section. Kraft Heinz blamed the shortage on “unexpected incredibly high demand,” but the company said in a statement they planned to restock the item. We told you that sheet masks are a beauty trend that Gen Z and Millennials are interested in, and the Oscar Mayer’s bologna face mask also incorporates self-care elements, promising “unparalleled serotonin surges and prolific amounts of selfies”—so while the product itself might seem jarring at first, the combination of popular beauty trend and humor clearly made it appealing to young consumers.

Campbell’s Soup-Scented Candles
Oscar Mayer isn’t the only food brand that launched its own unexpected branded product in January. Last month, Campbell’s teamed up with family experience company Camp on a collection of scented candles designed to look like Campbell’s soup cans and smell like its iconic soup pairings, like “Tomato Soup and Grilled Cheese” and “Chicken Noodle Soup.” The candles feature a Winter Warmup Guide for families that offers inspiration for staying entertained during the cold winter months, like arts and crafts, recipes, and games that parents can play with their children. Once each candle is burned, a miniature “Snowbuddy” figurine awaits the bottom of the can. The candles were an instant hit and quickly sold out online after dropping. Scented-candles are becoming a go-to weird product drop—and the Cambell’s x Camp collection is proof that the marketing trend can appeal to Millennial parents and kids as well.

Arby’s Smoked Sweats
The list of fast food brands introducing limited-edition merch is endless—and last fall, Arby’s joined the competition with its new scented loungewear set. To coincide with the launch of its new Real Country Style Rib Sandwich, the fast food chain partnered with Stateline Apparel to release a line of limited-edition “Smoke Sweats.” Deep-burgundy jogger bottoms and a hoodie embroidered with a subtle “A” (for Arby’s) were included in the set, with the real branding coming from the rich smoked meat scent fuming from the apparel, which was supposed to be reminiscent of clothes bathed in a “smoke smell” after leaving a bonfire. The scent is true to the sandwich as Arby’s smoked the loungewear over hickory from its rib supplier, Sadler’s Smokehouse, then vacuum sealed it to lock in the smell. Fans quickly snagged the “rich” set, causing it to sell out within the first day of its launch in October 2021. Shortly after, the smoked loungewear began appearing on eBay for $999.999, signaling just how in-demand the scented apparel truly was. Because of the popularity of the set, the restaurant chain released another batch the following week, which also sold out just as quickly. Arby’s certainly isn’t a stranger to releasing limited-edition weird products that create hype among its customers: a month after releasing its scented loungewear, the brand launched fry-flavored vodka and we told you about the deep fried turkey pillow they released in November 2020, which also sold out immediately. 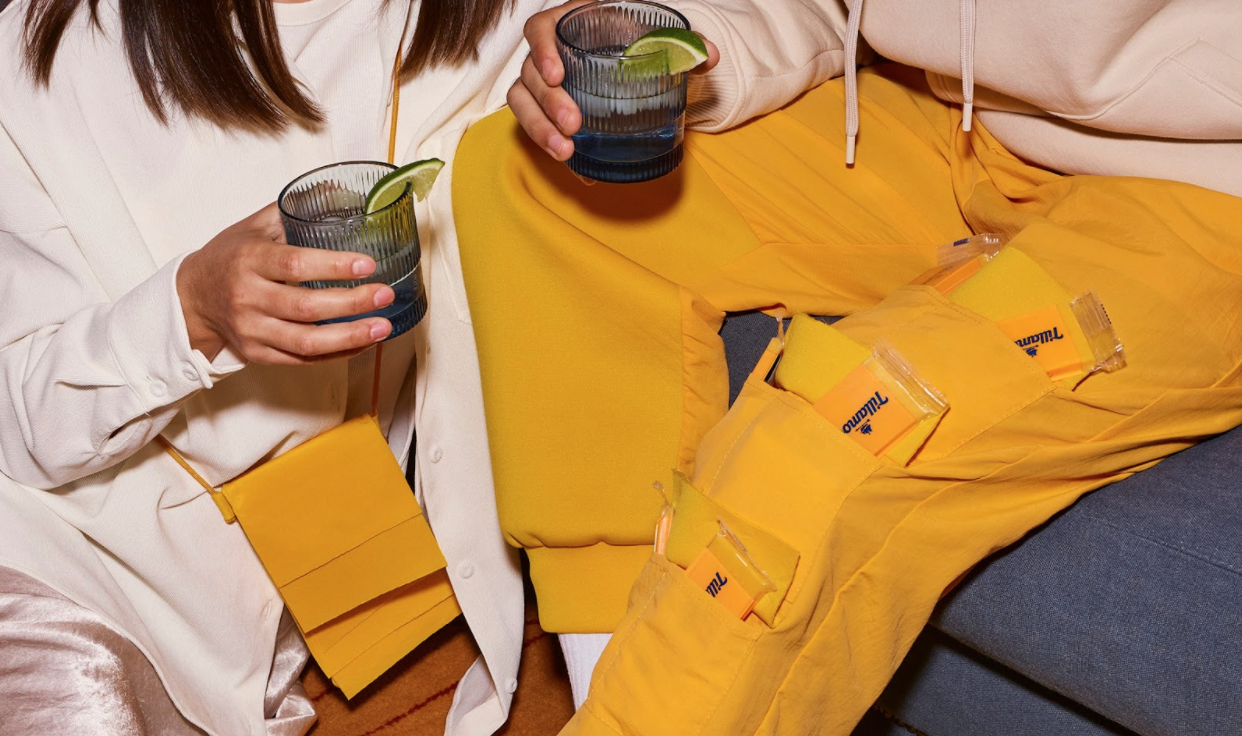 Tillamook’s Cheddar Collection
Cheesy products certainly are a hit—and young people can’t seem to get enough of them. When Stouffer’s launched its insulated fanny pack designed to fit lasagna, it became one of the most-talked-about products in its merch collection, and of course, sold out. We also can’t forget about Kraft Heinz and Van Leewuen’s macaroni and cheese-flavored ice cream. Then, there’s Cheetos, who teamed up with Adidas and Bad Bunny last summer to release a line of loose-fitting bright orange cheetah tracksuits and jersey-like tops. And of course, who could forget Pizza Hut and Gravity’s Original Pan Weighted Blanket? This year, Tillamook came out with its own clothing collection of limited-edition cheesy-inspired apparel. Ahead of National Cheddar Day, which fell on the same day of the Super Bowl on February 13, the creamery launched a Cheddar Collection which includes cheddar-orange Party Pants that go for $35, and come with “with removable, insulated pockets that double as a cheddar-toting clutch or wristlet” and according to the brand’s site, it can hold three pounds of cheese. The rest of the line also includes a $25 Thick Cut Crewneck with “fringe inspired by [their] Farmstyle Thick Cut Shreds,” a $15 Slices Bag “inspired by and built to fit [their] Farmstyle Thick Cut Slices,” a shred-fringed cowboy hat, and Luck Cheddar Playing Cards “inspired by [their] Baby Loaf two-pound cheddar block.” The Portland-based company also brought back its 40-pound blocks of cheese, which were a hit last year during National Cheddar Day. All the clothes (and 25 pieces of 40-pound blocks of cheese) dropped on February 1 and, you guessed it, quickly sold out on the site. 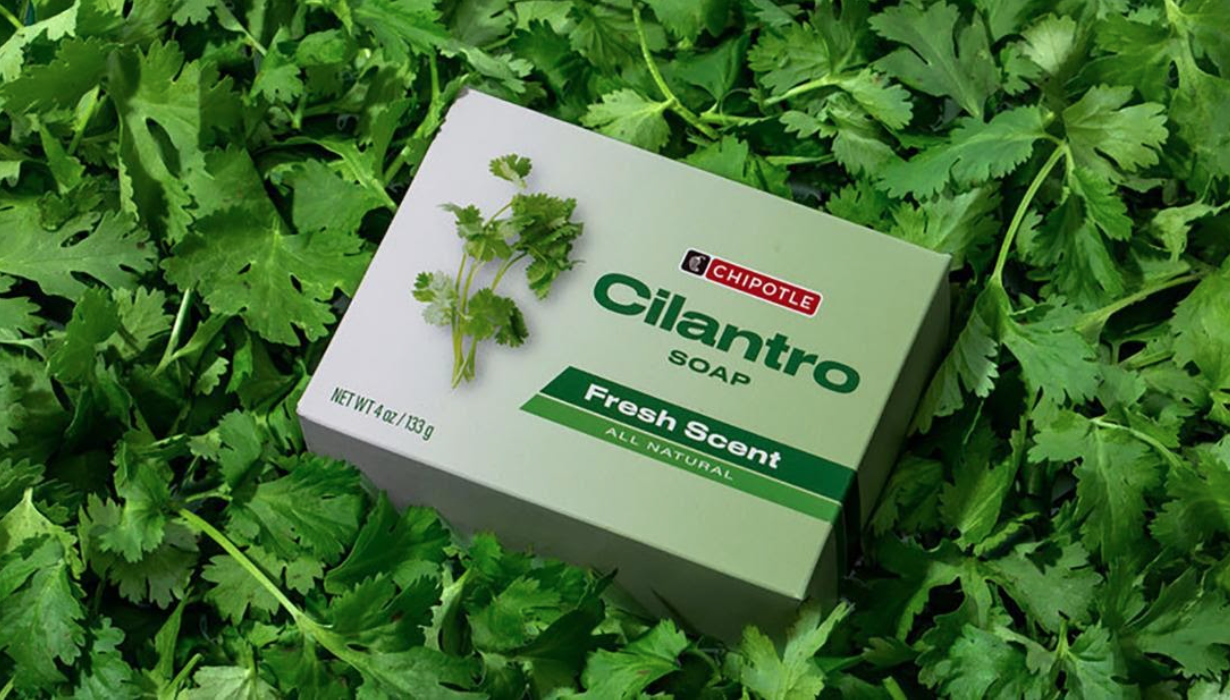 Chipotle’s Cilantro Soap
We told you that Chipotle was one of the restaurant chains that launched its own site to sell clothes and other themed accessories, and they haven’t been afraid to add some offbeat offerings to the usual branded merch lineup. At the beginning of December, the company decided to riff on the memes that show 4% to 14% of the population experiences a “soapy flavor” when they eat cilantro by quite literally launching green, cilantro-scented soap. To coincide with the new product, members of the Chipotle Rewards program had the opportunity to collect a “Cilantro Lover” badge during the first week of December as part of its Extras feature that allows users to unlock extra rewards points. Clearly, there’s a lot of cilantro lovers out there because the soap sold out shortly after being released. Chipotle CMO Chris Brandt said in a statement: “Our Cilantro Soap plays into a larger trend of turning digital moments into real life experiences. Every Chipotle fan, regardless of which side of the great cilantro debate they’re on, can appreciate this fan-inspired gift.”