Hinge’s West Elm Caleb Is The Real-Life Tale of “John Tucker Must Die,” on The Viral List 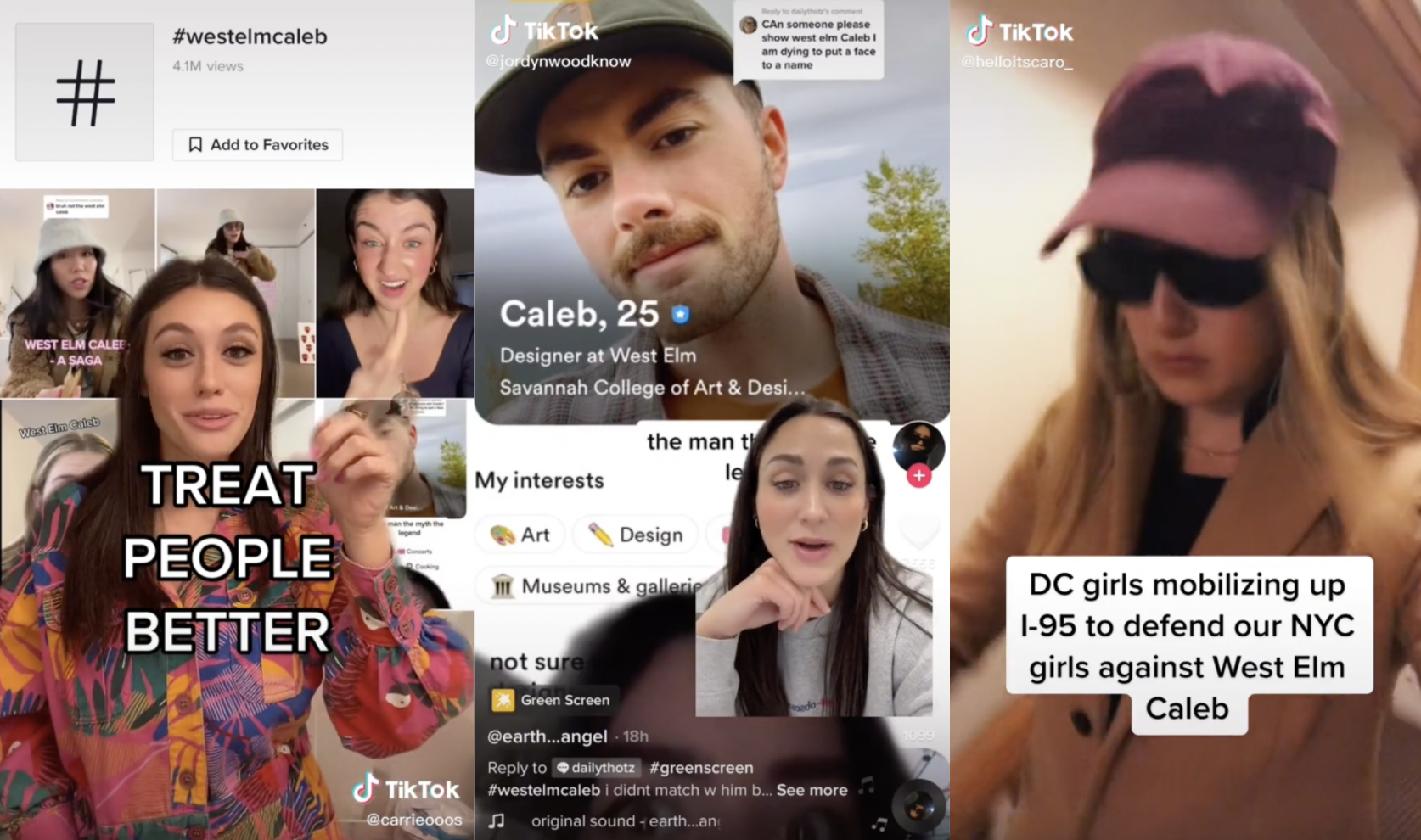 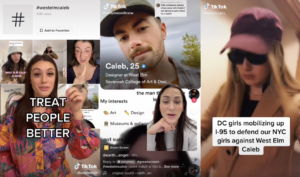 Women on TikTok are sharing their stories about a serial dater they met on Hinge, young people can’t stop talking about Yellowjackets, hair stamps are the next Y2K comeback trend, #MLKDay is trending on TikTok—plus more internet buzz on this week’s Viral List! 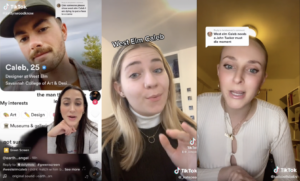 Caleb Hunter is a 25-year-old designer at West Elm and lives in NYC—or so his Hinge profile claims. After a series of dates with women where he reportedly “played up his job as a furniture designer at West Elm” only to ghost them later on, women have organized on TikTok, sharing their strange (and in some cases awful) experiences with Hunter, who is now known as “West Elm Caleb.” Basically the real-life version of John Tucker Must Die. #WestElmCaleb is trending on TikTok and Twitter as women share their stories, and it’s opening up a much-needed conversation about toxic online dating behaviors. One post from @kellsbellsbaby reads, “When you are dating a man for 6 weeks and find out through a FYP TikTok that he is lying to you and dating every other woman in nyc.” She later gave the full story on West Elm Caleb in another TikTok clip, sharing screenshots of their texts, revealing he made a Spotify playlist for her and claimed to delete Hinge to be exclusive with her. In part two of her saga, she shares the complete 180-degree turn West Elm Caleb took via a series of texts proving he’s really not interested in her at all and is dating several other women. Long story short, the women who were involved with Caleb (no matter what extent it was) started piecing the story together after @meemshou exposed him, and the Caleb tales have since unfolded via #WestElmCaleb on TikTok, garnering more than 27M views. And as you can imagine, endless jokes and memes have been made about Caleb, just like the internet organized over Couch Guy (except this time, there’s real tea to uncover). The clips detail how West Elm Caleb has charmed, love bombed, and in more extreme cases, sexually harassed some women (23-year-old Kate Pearce details how West Elm Caleb sent her a nude without her consent here…and ghosted her right after). Not only are women warning fellow NYCers to avoid West Elm Caleb, they’re highlighting how his actions go far beyond just “shitty dating.” Pearce sums it up, “If this is the chance to make a statement about men’s poor behavior, then why not take it?,” adding that it’s time for Caleb, like many other men on dating apps, to be held accountable for “using women to his advantage and women’s disadvantage” (if you want an even deeper look into this real-life John Tucker, there’s a podcast episode that Pearce created). The saga has become so big that social media users have been flooding the comments on West Elm’s social profiles, while TikTok even acknowledged it in a tweet that has now been deleted. Moral of the story, young women are building community on TikTok over one man who has single-handedly bamboozled everyone, while putting a face to all the men on dating apps who have been acting like West Elm Caleb for years without being held accountable. 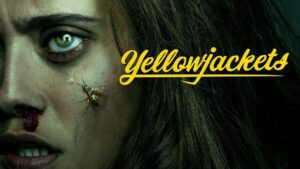 Holding a 100% score on Rotten Tomatoes, Showtime’s Yellowjackets follows “a New Jersey high school girls’ soccer team that gets stranded in the Canadian wilderness from a plane crash on their way to a national championship in 1996.” The series hints that some end up making it back to civilization by following the stories of the women who made it out alive, while detailing the scary real version of Lord of the Flies that the teenagers battle. Consider it Lost, but made for Gen Z. More than one million viewers tuned into the show’s season finale on January 16 (doubling the show’s premiere viewership), and Showtime notes that Yellowjackets has averaged more than five million weekly viewers since debuting—a record high for a new series from the network. Fans are sharing their theories about the show and each character’s fate in the Yellowjackets subreddit (counting more than 25K members). Posts in the subreddit range from “cannibalism to vegetarianism pipeline lol” to “butterfly symbolism” to “you’ve got a little pit girl stuck in your teeth”—clearly there’s a lot to talk about. Branded face masks and Yellowjackets-themed tarot card artwork have also been created in response to the fandom, while Urban Outfitters and horror streetwear brand Poltergeists and Paramours have released branded collections, too. Fans and industry experts have compared Yellowjackets’ horrific tales to Squid Game as it follows “the same DNA in exploring just how far human beings are willing and capable of going in an effort to survive their circumstances.” YPulse’s Pop Culture Redefined trend research shows the finale of a popular TV show is a top pop culture moment young people care about, and survival dramas are becoming popular pieces of entertainment in youth culture. 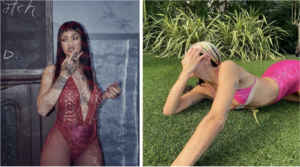 Hair Stamps Are Trending, Thanks to Rihanna and Dua Lipa

In case you needed a reminder, Y2K is still trending among young consumers and the latest 2000s-era beauty / fashion item to go viral are hair stamps—a.k.a. temporary hair color that comes in different hues and stamp designs that just about every Millennial used to play around with as a kid. Rihanna debuted red and black stamped hair in an Instagram post this week, while Dua Lipa showed off her red and green heart stamped hair in a post earlier this month. Naturally, hair stamps started trending after the two stars debuted their fresh looks, with beauty retailer Justmylook revealing that searches for “hair stamps” increased 566% overnight and “Rihanna hair” was up 6700% following her post. Megan Thee Stallion is also making hair stamps cool again; the artist’s hairstylist gave the trend a playful spin in Megan The Stallion’s “Cry Baby” music video where she is seen wearing a Barbie blonde wig with pink, blue, and yellow flowers stamped in. YPulse told you how at-home hair dye boomed at the beginning of the pandemic, and hair stamps could be the next trend in at-home hair dye as young style icons continue giving the look a Gen Z and (young) Millennial upgrade. 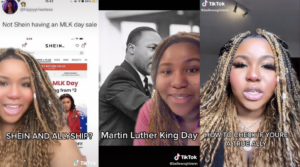 Young Activists Used TikTok To Educate the Public on How to Authentically Show Up on Martin Luther King Jr. Day

#MLKDay has been trending on TikTok, and leading up to the national day of remembrance this past Monday, young people used the platform to educate their peers about the real history of Martin Luther King Jr.—not the “watered down version” found in school history books. The tag has garnered 570.5M views, and the most-viewed clip is from @bellewoghirenn (Annabelle), who describes themselves as an “educator on decolonization, diversity, and anti-racism” in their TikTok bio. Their clip not only gives viewers a deeper glimpse into Martin Luther King Jr.’s global impact, but has sparked a public conversation about how to genuinely honor the late activist. Since their post earlier this week, @bellewoghirenn (Anabelle) has posted more videos on how race was built, how to be a true ally, and Black history, while holding brands accountable for their performative activism. In one video, Anabelle says, “today I’m going to give you a bad example of allyship,” using the green screen effect to show a tweet about Shein’s MLK day sale. Diet Prada (an Instagram fashion watchdog group) also posted about Shein’s MLK day sale, which includes a series of screenshots of tweets calling out the brand for profiting off someone who died fighting for equality. Annabelle explains further, “What this works to do is devalue Martin Luther King’s message, that’s working to devalue the fight for anti-racism. A day where we’re honoring someone who really worked hard for global inclusion should not be a topic of profit.” This certainly isn’t the first time a brand has been called out for attempting to profit off of historic events, and it proves that companies still have a lot of work to do in showing up for change. At the height of the Black Lives Matter movement in summer 2020, YPulse told you how it’s important for brands to go beyond performative activism (a.k.a. activism that’s done to increase one’s social capital) and authentically show up for the causes young consumers care about and are affected by. Getting specific about what actions you’re taking to promote inclusion, opening up about past wrongs, and committing money to support causes / charities are some of the top three things young consumers want to see brands do to prove they’re committed to change. We also told you how activism on TikTok has been leading to real change, and #MLKDay on TikTok is another example of how young consumers are keeping brands—and their peers—accountable.

Twitter users are making memes about how households can only receive four rapid COVID-19 tests by sharing images of large famous families that would only get four tests.

Adele’s Las Vegas residency has been postponed just one day before it was supposed to kick off.

Eminem clapped back at Gen Z’s attempt to cancel him in a verse on a new remix of Cordae’s “Parables.”

Gucci is being criticized for using real tigers in an advertising campaign aimed at celebrating the Chinese New Year Holiday, which starts February 1.

Six Love Island influencers are being called out by The Advertising Standards Authority (ASA) for not disclosing their posts as ads.

A trailer and new theme song for The Proud Family reboot dropped this week.

Netflix released a first look at its South Korean remake of Money Heist.

The full title of Amazon’s Lord of the Rings series was unveiled in a new video.

Encanto’s “We Don’t Talk About Bruno” is now the highest-charting song from a Disney movie, surpassing “Let it Go.”

Hilary Duff revealed her thoughts on the Lizzie McGuire reboot getting scrapped, explaining, “there’s a time and place for everything. It just wasn’t [Lizzie’s] moment,” which has us all hoping that maybe someday it will happen.