What are Millennials spending their money on every month, and how does it change as they age up? We break it down in three charts…

It’s been two years since the infamous avocado toast remark set the tone for talking about Millennial finances, and reports surrounding the generation’s spending still tend to focus on their penchant for excess. Just look at this Forbes article, which finds that 60% of Millennials spend more than $4 on a single cup of coffee. In fact, The Atlantic reports that “coffee-shaming” has become financial gurus’ go-to Millennial insult. Blaming the generation’s financial woes on purchasing expensive to-go coffee has become a norm, but while it’s true they’re drinking more java outside the home, their debt-ridden bottom lines are much more complicated than that. Instead, many may want to point their fingers at frappes because they represent a cultural divide between generations: as Millennials delay buying a home and having children, they’re more likely to live in a city where they’d rather frequent a coffee shop than brew beans for one.

For all the money shaming Millennials have to put up with, we’ve known for a while that this generation is actually pretty tight with the purse strings—and fairly financially literate. When we asked young consumers how they feel about money, “optimistic” and “fortunate” were their top responses—but “worried” and “nervous” follow closely behind. Their top financial worry is savings, and nine out of 10 Millennials agree that saving money is important to them (and seven in 10 tell us they have savings). Sure, they might be 20% more likely to buy a $4 cup of coffee than Gen Xers and 13% more likely to eat at a popular restaurant, but according to Charles Schwab’s Modern Wealth Index, more than a third of Millennials also have a financial plan, compared to 21% of Generation Xers and 18% of Boomers.

Planning is definitely important for this generation—because while they may have big goals, they are still behind on the traditional markers of adulthood, such as buying a home. According to findings from the Urban Institute, just 37% of 25-34-year-olds own homes, compared to 45% of Boomers at the same age. And of course, there’s the debt. Millennials have now racked up over $1 trillion of debt, according to the New York Federal Reserve, more than any other generation in history. Our own data shows that 56% of Millennials currently have debt. At the same time, 19-37-year-olds wield an annual spending power of $2.5 trillion. And with this generation continuing to age up into their financial power, we’re keeping tabs on exactly where that spending is happening. In our most recent  finance and spending monitor, we asked 19-37-year-olds to tell us what they spend money on in a normal month. Here’s what they had to say:

Millennials report having an average of $1,078.52 in spending money after bills, and—no surprise here—the vast majority of them are spending it on food. Millennials are self-proclaimed foodies, and cooking is one of their top-five offline hobbies. And, of course, we’ve already established their love of dining out. But their spending on food, and other categories, does shift in some ways as they age up—though not in the all the ways you might expect. When we compare the monthly spending of 18-24-year-olds and 25-37-year-olds, we see some clear differences

Older Millennials are also more likely than younger to be spending on clothing, events and experiences, alcoholic beverages, and medical expenses. Many of these differences are driven by Millennial parents. This group is more likely to spend on groceries, gas, events, alcohol, and variety of other categories than non-parent Millennials, as they’ve transitioned into spending for two (or three) and entertaining their families.

These differences between older and younger Millennials is also reflected in the kind of bills they’re paying monthly: 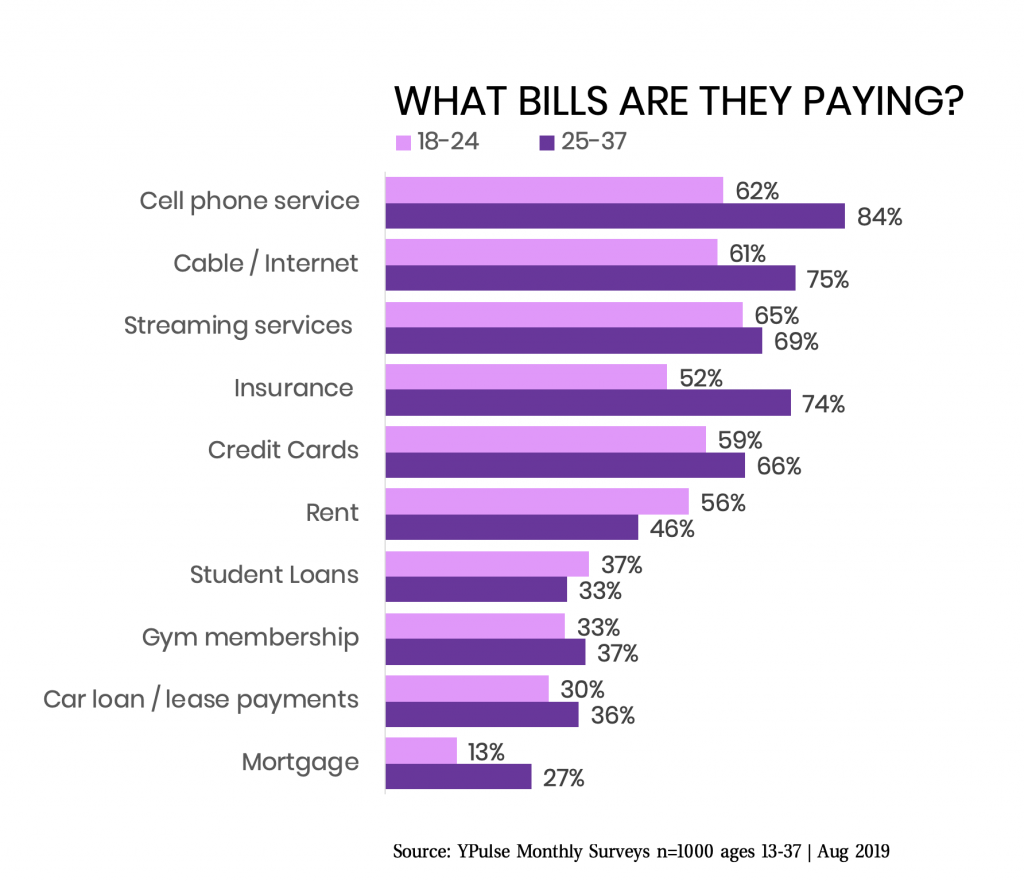 Roughly one-third of Millennials under the age of 35 own a home, according to the U.S. Census Bureau, which is still about 9% less than previous generations’ homeownership rates at ages 25 to 34, according to research from the Urban Institute’s Housing Finance Policy Center. But we see here the hints that the generation is slowly making there way from apartment-dwelling renters to home-owners. That said, while we saw a big jump in homeownership in 2018 over 2017 among Millennials, this year has proven a little lackluster. Essentially the same number of 19-37-year-olds are paying a mortgage this year as in 2018, so they’re not reaching this milestone quickly.