Young consumers might be watching sports differently from previous generations, but they still have favorite athletes—and the name on top beat out some serious competition…

There is little doubt that Gen Z and Millennial viewers are changing the way that sports are watched. (Ypulse has been tracking the shift in sports live-streaming versus live TV viewing—more on that tomorrow.) But watching differently doesn’t mean they’re not watching—and it certainly doesn’t mean they don’t have favorite athletes. In fact, thanks to social media, today’s athletes are full-blown influencers. According to Ypulse data, 34% of 13-35-year-olds on social media follow athletes or sports teams. When we ask which type of celebrity they trust most, athletes topped the list, over online celebrities, music celebrities, and TV/movie celebrities. We see a similar pattern when we ask what public figures they trust: 20% of 13-36-year-olds say athletes, who rank above TV stars, movie stars, bloggers, Instagrammers, and all politicians on the list. When choosing between music celebrities, Hollywood celebrities, online celebrities, and athletes, young consumers are most likely to say that they admire athletes the most, and that they would like to see athletes as a spokesperson for a brand.

Thanks in part to Gen Z and Millennials’ high opinion of athletes, and the influence they have as public figures, we continue to track who the favorites are—and this year we saw a bit of a shake up. In our recent survey on sports and athletics, we asked 13-36-year-olds, “Who your favorite professional athlete?”* After three years of two names battling it out for number one, a new contender came out on the top of the ranking:

*This was an open-end response question to allow us to capture the full range of athletes that Millennials and Gen Z say are their favorites—without our preconceived ideas shaping their responses. As with any qualitative question, the responses include those that are top of mind and those that are most popular. The lists are ordered according to number of responses received, and alphabetically when ties occurred.

Who Is Their Favorite Professional Athlete Right Now?

For years, we have seen the battle between Steph Curry and LeBron James play out in our favorite athlete ranking. In 2015, LeBron topped the list. In 2016, Curry took the top spot. In 2017, LeBron was back on top. But this year, the pattern was broken: Serena Williams ranked at the top of the favorite athlete list. Last year, Williams was third in the ranking, but the past year has put her even more firmly in the public eye, with personal stories of a pregnancy and marriage making headlines.

Though some males named Williams as a favorite, female fans were the drivers of her top ranking. Williams’ strength was a major theme in their reasons for naming the talented tennis player. One 23-year-old female explained, “She’s just so tough and incredible,” while a 14-year-old female said “She is strong and I like her love of tennis.” One 22-year-old female told us, “She is a great representative of what women can do in sports.”

Another theme we saw was Williams representing women of color especially.  One 29-year-old said, “She’s a strong black woman who also had a baby while playing tennis. She seems like a strong cool lady.” Another respondent explained, “She’s an inspiration to all women, especially WOC,” and a 24-year-old female said simply, “She is the epitome of black girl magic.”

We can see the way that female fans especially favor Williams when looking at the top rankings for males, females, 13-17-year-olds, and 18-36-year-olds: 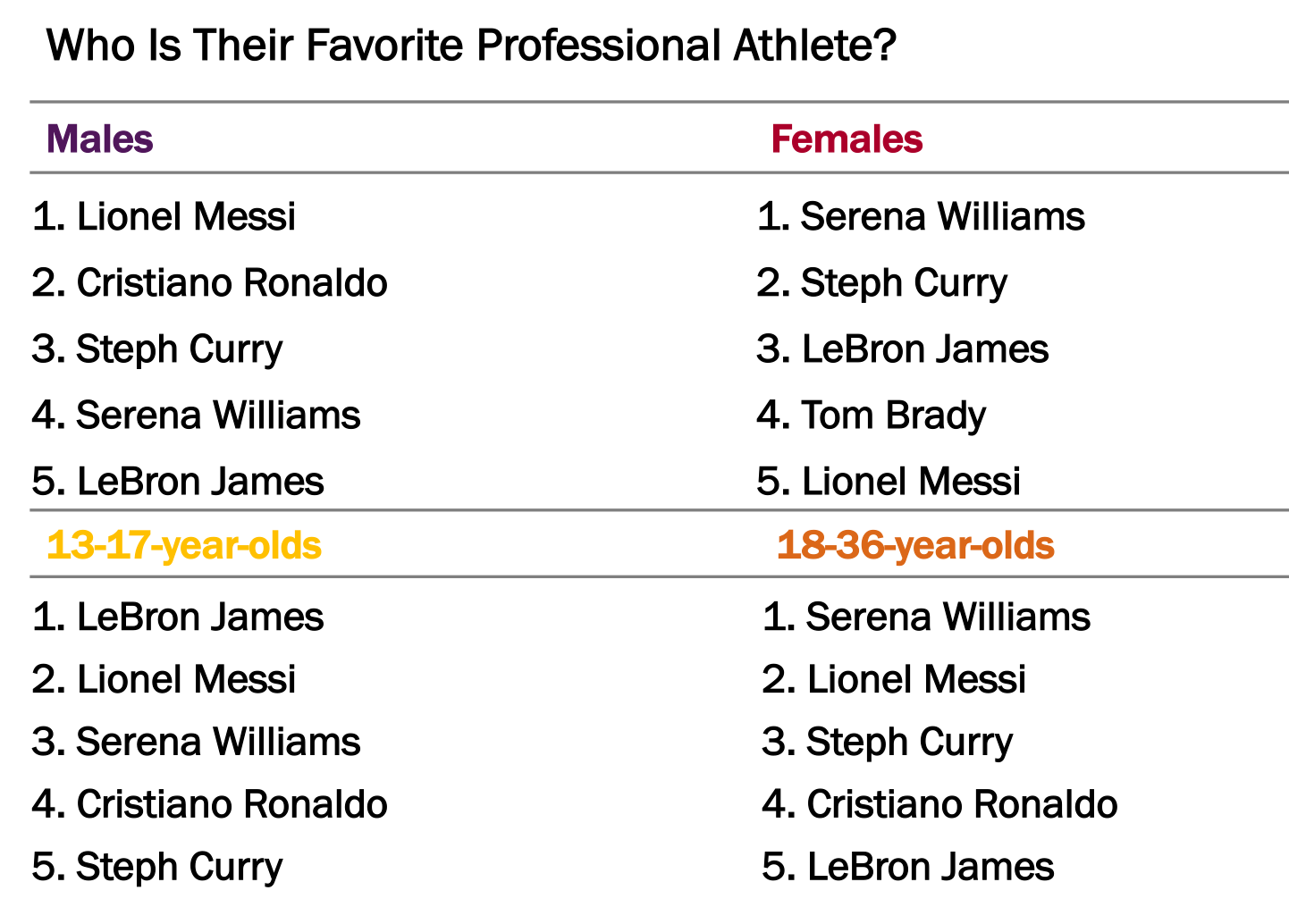 While Williams makes the top five for all groups, she is number four on the male ranking, while Lionel Messi took the top spot—thanks perhaps to the World Cup, which was airing close to the time the survey was fielded. Messi’s skill on the soccer field were the focus of the respondents who named him as a favorite, with words like “legend” used to describe him.