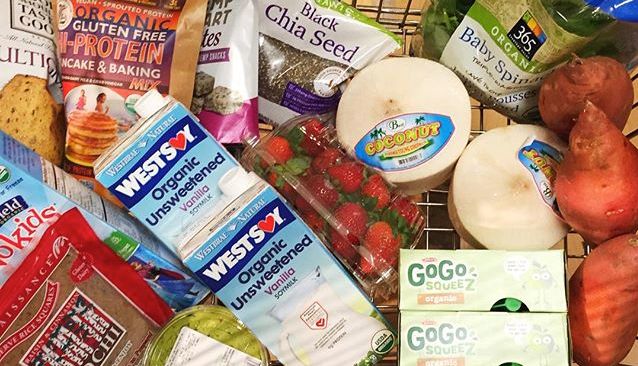 With the majority of Millennials 18-32-years-old doing the grocery shopping for their households, we wanted to know what brands are going in their carts…

According to a Ypulse monthly survey, 84% of 18-32-year-olds grocery shop, and 56% of those who shop say they do most or all of the grocery shopping for their household. Four in ten tell us they are grocery shopping about once a week, and over 20% are going more than once a week. We also know that though the majority of 13-17-year-olds do not do the grocery shopping themselves, 31% of teens say they have say in at least half of the groceries that are purchased in their household, and 60% say they have some say—so their favorite brands matter too. So with all of this grocery store influence in the hands of 13-32-year-olds, what brands are they putting in their carts? We asked them.

This was an open-end response question to allow us to capture the full range of food brands they like. As with any qualitative question, it’s important to keep in mind that the responses will include those that are top of mind, those that are used most often, and those that are actually viewed in a positive light. But we certainly learned some interesting things about their food shopping preferences when we looked at their answers.

Here are the top ten responses to the question, “What are some of your favorite, or go-to, brands when grocery shopping?” 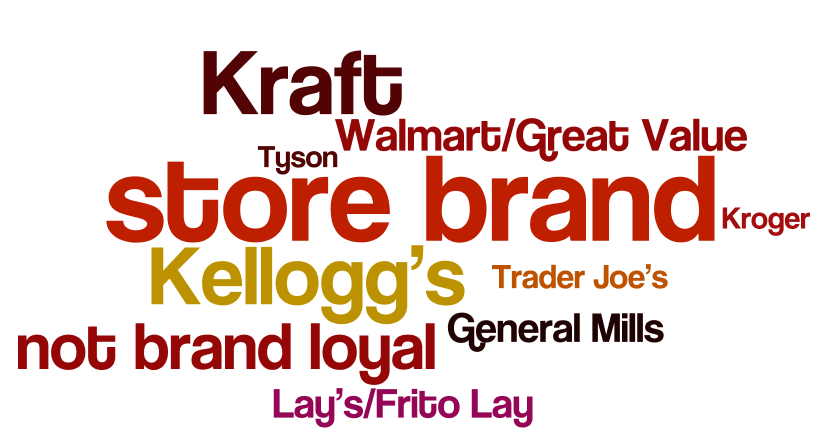 So what did we learn? Millennials are crazy for store brands. “Store brand” or “generic brand” were the top mentioned responses, and three store brands (Walmart/Great Value, Trader Joe’s, and Kroger) also made the top ten list. Their reasons for going with store brands is pretty clear: less cost for what they feel is the same quality. One 21-year-old male told us store brands are his favorite because “it is the cheapest and in many cases of equal quality.” A 27-year-old female said, “Store brands are cheaper and taste almost the same,” and a 32-year-old male shopper said he finds store brands better at times than name brands.

Kraft and Kellogg’s took the number two and three spots on the list respectively, and with both Kellogg’s and General Mills on the top ten list, we can hypothesize that Millennials are loyal to their cereals. However, “not brand loyal” responses were fourth most-mentioned.

Those who are not loyal to brands have a few reasons. (It’s not just that Millennials’ aren’t brand loyal in general.) Some said that they don’t have a favorite food brand because they mostly buy produce or proteins when they grocery shop. One 30-year-old male explained, “Most of what I buy is unbranded organic produce or meat/seafood.” Others aren’t as aware of brand name as they are of health. A 28-year-old male told us, “I don’t really shop based on brand, unless a brand makes terrible or very unhealthy food. Then I say no to that.”

But the list takes on a different balance when we look at all the individual grocery store brands mentioned, and combine them:

Now we’re seeing the real influence that store brands have on Millennials’ grocery shopping. More than 30% named a store brand, or said “store brand” or “generic,” as their favorite or go-to food brand to shop for, and they’re making store brand products a part of their shopping habits as they become the majority of grocery shoppers. With the grocery store brands pushed together, we also see some more name brands that they’re reaching for: Coca-Cola, Perdue, and Campbell’s.

When looking at all of the responses, not just the top ten, we see some other interesting trends. Brands that included words like “organic,” “nature,” “fresh,” “garden,” and “farm,” were not hard to find. In fact, 12% named brands with those words in the name. While not a huge percentage, we can see this verbiage continuing to appeal to them. When we asked which labels make them more likely to buy a product when grocery shopping, 35% said “all natural,” and 34% said “organic.”