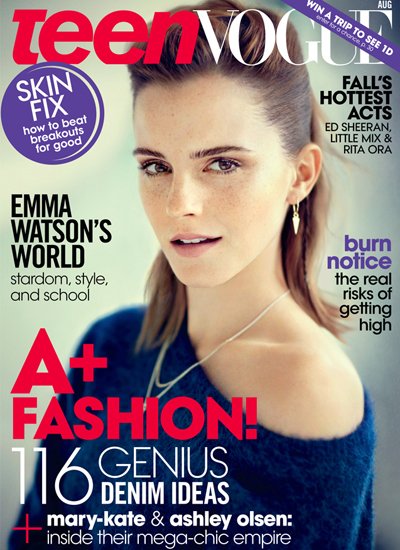 Today we’re reading Teen Vogue, Seventeen, and NYLON so you don’t have to, giving you an inside look into the complicated world of teenage girls to find out what they’re saying, doing, wearing, and listening to right now…and why.

Covergirl: Emma Watson’s headstrong personality has taken her far post-Potter, casting her in teen favorites The Perks of Being a Wallflower, The Bling Ring, This Is the End, and an upcoming project about Noah’s ark. Fans have seen her grow since adolescent and respect her as a role model since she chooses finishing her Oxford degree over celebrity antics. Millennials notice the young and famous who remain “classy” above media clutter.

Stats to Note: We know that teens are smoking pot and it’s less of a big deal than ever before, but apparently almost 17% of teen pot smokers will become addicted. Teen Vogue talks to high-schoolers who are surrounded by weed culture and experiencing negative side effects both physically and mentally, sending a message out to readers that pot might not be without risk.

On the Sound Waves: Girl power is taking over the music scene with Rita Ora and girl group Little Mix leading the way. Rita has earned love from Jay Z, Karl Lagerfeld, and fans worldwide (her debut album went platinum!) and is a fixture on the fashion and festival scene, making her someone to watch as a primary influencer of teen style. Little Mix is set on bringing back the power girl group of TLC and Spice Girl era, and we’re curious to see how their career evolves amidst the current revolution of boy bands.

Rising Star: Morgan Saylor has found fame as the moody daughter of a closeted terrorist in Homeland, but fame hasn’t gone to her head. Attending a public high school for all four years has given her a different perspective than many young actresses in Hollywood and puts her in the same mindset as Millennial teens, a connection that could be played out in future roles.

Concert Watch: Teen Vogue’s list of upcoming concerts that teens cannot miss is a snapshot of the stars that matter to them right now, including John Mayer (back after three long years), Mrs. Carter, Lana Del Rey, Jessie Ware, and A$AP Rocky. 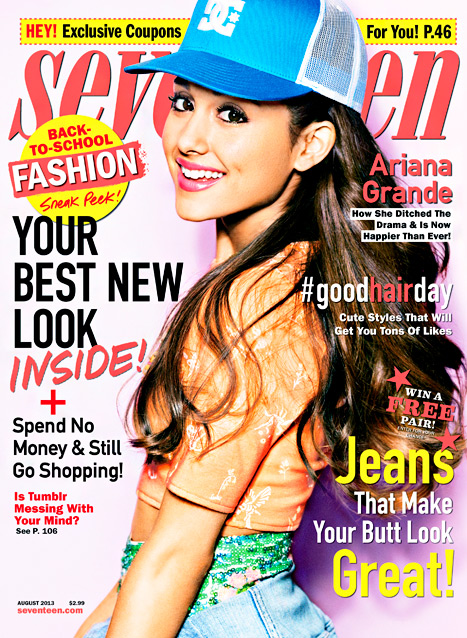 Covergirl: Ariana Grande is as much an up-and-coming pop star as a social media fixture, unafraid of sharing everything with her 10 million plus followers who crave sneak peeks into her fast-growing rise to mainstream fame. Millennials enjoy following artists from their first roles to big stage success and Ariana has managed to transfer her fan base from her first role on the TV show Victorious to a now budding music career by maintaining constant connectivity via Twitter and Instagram. Ariana will be performing hits from her new album at the pre-show for the VMAs next Sunday alongside Austin Mahone, who has long been one of Ypulse’s stars to watch.

What’s In, What’s Out: 66% of teens are still into flower crowns, a festival fashion trend that Seventeen readers are seeing crop up in high school yearbook portraits. Selfies are another trend that isn’t going away anytime soon, as 76% of the mag’s readers are in favor of couple-selfies especially, a nod to the infatuation with couples in the digital public eye.

Sign of the Times: Our coverage of self-harm being perpetuated in the online space goes hand-in-hand with Seventeen’s feature article on the phenomenon of the “thigh-gap.” Teenage girls looking for “thinspiration” peruse Tumblr only to find images of stick-thin girls showing off the gap between their thighs when their feet are together, believing it to be a marker of skinniness and good looks. Some teens have fallen victim to the thigh-gap obsession by adopting eating disorders and turning to social media to encourage the dangerous behavior. The mag says that 86% of girls find that social media negatively influences their body confidence, but the allure and addictive nature of the internet is overpowering self-control among teenage girls and no real solutions have been brought to the forefront.

Download This: Teens are growing bored with traditional radio streaming services and ready for new apps on the market with a different sound. Fratmusic is obviously geared towards college partiers, but combines trending and mainstream artists for surprisingly unique playlists. Myxer Social Radio revamps the idea of chat rooms with “listening rooms” where friends can share music and invite their friends, creating a new type of live social space.

Rock the Vote: Five girls are in the running to grace the cover of Seventeen and their descriptions, YouTube Sensation, Future Olympian, Gutsy Business Owner, Baker Extraordinaire, and Warrior for HIV/AIDS Awareness, showcase the varied niche interests that young females are representing. 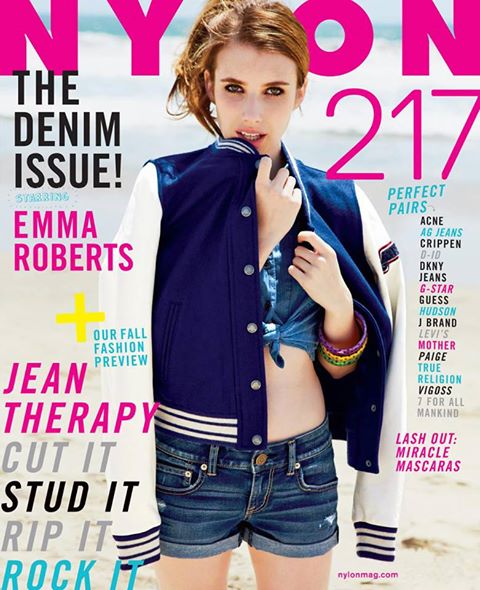 Covergirl: Emma Roberts has been the subject of media scrutiny lately surrounding a domestic violence issue with her boyfriend, and though it has displayed a less than flattering side to the young actress, at least we know she’s feisty. While this tabloid mess was not addressed in her NYLON cover spread, she does explain, “I can’t say I’m never going to mess up, but if I do, I’ll definitely be very sorry.” She explains that she still sees herself as a kid and is “regressing a little bit” at 22 to hold onto her carefree youth, a reflection of the generation that has been stunted from developing careers and families due to external forces.

Rising Star: Miles Teller is the real-life Ferris Bueller, exuding a confident charm that will sweep girls off their feet in his lineup of movie roles. First there’s the highly anticipated dystopian tale Divergent, then the Sundance favorite The Spectacular Now, and finally the rom-com Are We Officially Dating? As a mid-twenty-something he’s been out of the high school classroom for a while but has the ability to tap into the persona of his younger cohorts and give them exactly what they want to see on-screen, foreshadowing a career of endless possibilities.

Fashion Forecast: August is the magazine’s annual denim issue and covers (among a slew of other jean-related news) J Brand, which has grown into an iconic label for denim. In store for them is an expansion of the company’s read-to-wear line that debuted last year and won acclaim in the wardrobes of the most fashionable Millennials.

Movie Review: The Spectacular Now is based on a YA novel that explores coming-of-age with more depth, grit, and honesty than many other films in its genre. With Shailene Woodley and Miles Teller leading the film (both are the stars of Divergent as well) it has received rave reviews across magazine stands and is a story of young love that teens never seem to grow tired of.

TV to Watch: America’s Next Top Model is taking a departure from their formula and introducing male models into the mix for the first co-ed “cycle.” If the trademark drama of the show didn’t initially appeal to some Millennial viewers, the male eye candy of this season could be a way to get them to tune in.