Things You Should Know: Silent Discos 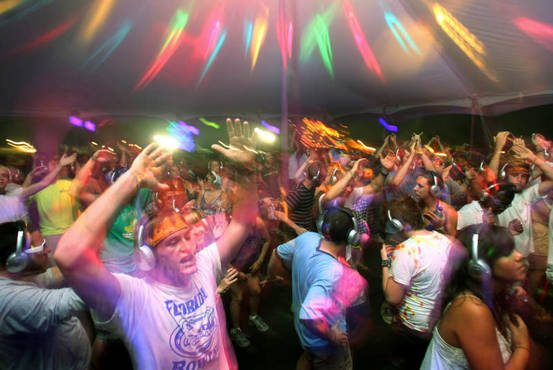 Welcome to Things You Should Know, our ongoing series on Millennial-fueled trends, events, slang, and memes that will keep you up-to-date on what is happening in youth culture.

Imagine entering a concert venue flooded with neon lights, illuminating thousands of people energetically dancing and swaying… in silence. You have entered into the world of the Silent Disco, a music and event phenomenon that is enticing Millennials to tune in, by tuning out everything but the music.

The Silent Disco hinges on wireless headphone technology. On arrival, attendees are given headphones that utilize radio frequency transmission to broadcast sound through and around any physical objects, and allow partygoers to choose from two or three music channels that they can switch between whenever they like. As opposed to traditional speaker systems, headphones allow listeners maximum sound quality and intensify music events for a more personal experience.

These events bypass the restrictions of traditional concerts because of their silence. Silent Discos allow young adults to party all night long without the troubles of noise violations. The idea for silent concerts was originally conceived in the ‘90s by eco-activists to reduce noise disruption in outdoor spaces. What appeals to Millennials today ranges from rapid exposure to different music genres to vastly improved sound to the feel of a group experience that is poignantly customized. Everyone is dancing, but not necessarily to the same song, and the element of music choice makes each person’s experience unique. Silent Discos allow Millennials to literally dance to the beat of their own drum, engaging in a collective atmosphere while also tuning in for an experience that is all their own. 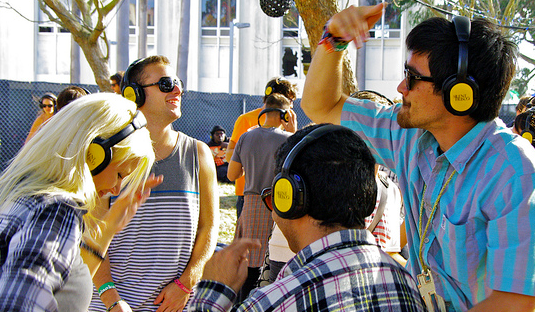 The popularity of Silent Discos has spread rapidly across the globe from Europe and Australia to the U.S., appearing at raves and in festival culture in tents at Bonnaroo, SXSW, Coachella, Camp Bisco, and Warped Tour. This month, BangOn!NYC incorporated a Silent Disco into their festival along with 3D video mapping, food trucks, clothing vendors, aerial performances, art installations, and a giant inflatable slide. These sorts of wild, all-encompassing events resonate strongly with Millennials who are constantly searching for the “next best thing,” and Silent Discos themselves provide an uncommon experience for Millennials to share with their social circles and on social networks, from Facebook to Vine.

Silent Events, one Silent Disco stager, allows attendees to switch between three channels on their headphones to hear competing DJs. The atmosphere is elevated with an air of competition between DJ sets, as the dancers’ headphones light up with the color of the DJ they are currently listening to, and mixmasters vie to have their color dominate the sea of partiers. Attendees also vote for their favorite and post on social media following the event to compare the “red light” versus “green light” sets. 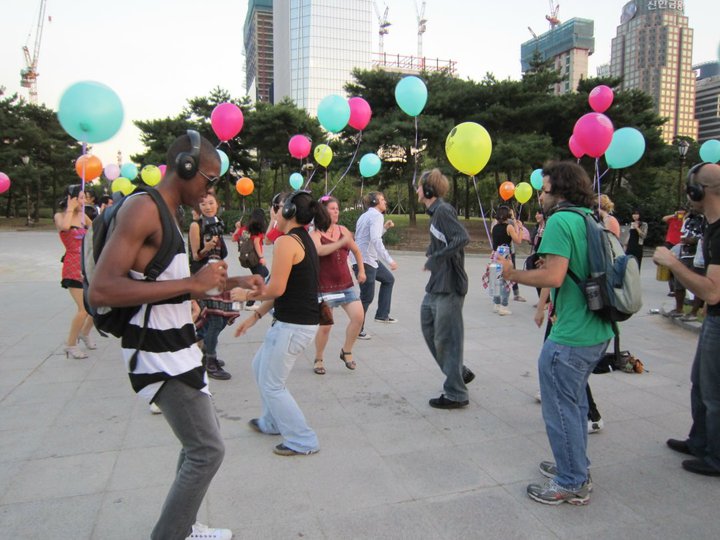 The idea of Silent Discos is appealing to musicians as well. For the release of J. Cole’s new album, Born Sinner, he hosted a Silent Disco listening party to bring his fans closer to the music, explaining in a Fuse TV article that, “while the song’s playing, I don’t want you talking about the song. I want you to listen to every word.” Silent Discos offer Millennials a feeling of intimacy and a focus on the music sometimes missed at large concerts. The experience is like none other, allowing young attendees to dance ‘til the break of dawn like no one is watching, and sing favorite songs at the top of their lungs, because thankfully, no one is listening.