A Themed Education: Q&A with The Bronx Academy of Letters 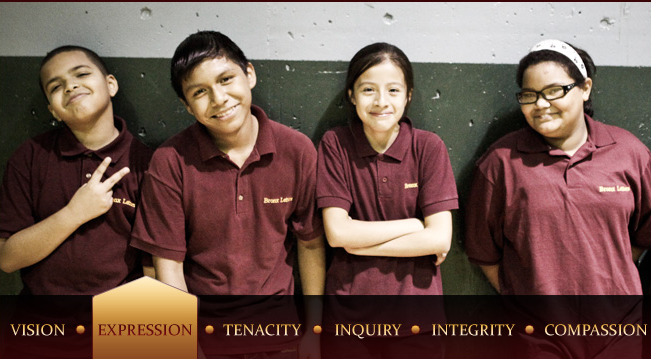 The state of public schools in the U.S. has become a public social cause, and a topic of great debate, in recent years. The school system shaping Millennials and post-Millennials has been called broken by some, but the solutions are less clear. Some champion charter schools as the future of the education system, others suggest banning private schools, and recently emphasizing early education by making it a part of the public system, has been held up as a possible solution.

The Urban Assembly Bronx Academy of Letters was founded in 2003 during the “small schools movement,” a period of time that larger public schools were being sized down into more manageable organizations with focused curriculums. According to the NYTimes, since 2002 NYC has closed or started a phase out of 63 public high schools, and opened 337 in their place—many of them small themed schools. Today, the movement is continued in a slightly different way, and recently some large schools have been reorganized to house several smaller themed schools all under one roof. Themed educations, schools that focus their curriculums on one particular topic, have been happening all over the country and are one of the educational forces influencing some of the next generation.

The Bronx Academy of Letters is celebrating its 10th birthday, and we were able to sit down with the school’s Executive Director Carrie Angoff and Board President Toni Bernstein, two of the Academy of Letters Advisory Board members, to hear about the obstacles that young and underprivileged Millennials and post-Millennials are facing, and how one school has been working to fix the problem over the last decade. 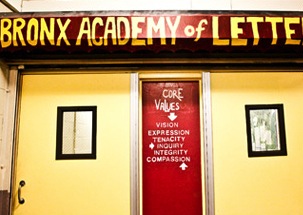 Tell us a little bit about the ethos of the school. How is it different?

Toni: At the time [it was founded], there were these giant, very bad, dangerous, pretty scary public schools. [The Schools Chancellor at that time, Joel Klein, and the small school movement] took all of these big schools where kids had to walk through metal detectors and brok them in to smaller more manageable places.

The other difference at the time was that they said, ‘ok, if you want to start a school, you have to have a theme.’ Literally, if you go through and look some schools have these crazy themes. There’s a boat-building school, there is a school of law and justice… Joan [Sullivan, one of the school’s founders] decided her theme would be reading and writing. At that time we became the Bronx Academy of Letters.

Carrie: That is still our mission to this day. The founding principal of the school is that writing is the building blocks of all learning. Students who can express themselves clearly in writing will do better in any path they chose in life. We incorporate writing into every aspect of our curriculum and what our advisory board primarily revolves around supporting that mission. There are two other important areas that we support, and those are global citizenship and college readiness. All of which tie together.

Can you tell us more about global citizenship being one of the founding goals of the school?

Toni: Interesting fact, and people find this hard to believe, but the area where the school is, which is about four miles from the Upper East Side, is in the poorest congressional district in the U.S. We’ve been involved in all kinds of summer travel, we have whole semester study opportunities. We have two kids next year that are going to a part of Milton Academy on full scholarship. We have, I think, three children who are going to a summer session this summer, we have kids that are studying at U.C. Berkley every summer. So just exposing them to the world outside the Bronx is a big deal.

Carrie: To follow up on that point, these are kids who most of them have never left the Bronx. It’s rare for them to go to Manhattan to be perfectly honest…And there is no question that in order for them to succeed in college and later on in life they need to be exposed to other ideas, other people, other ways of thinking. So we find programs we can partner with, and support programs that allow kids to go away. This year we happen to be sending kids on a program called Operation Breaking Stereotypes, which is a partnership with a school in Maine, a very rural community, and it allows kids to see contemporaries who are really different from them. They visit each other in their respective towns and they really get a lot out sharing thoughts and in the process breaking stereotypes they might have held about different groups of people.

Talk to us about the school’s graduation rate. The Urban Assembly schools report having a higher rate of gradation, is that true of the Bronx Academy of Letters as well?

Carrie: We count about 85% of the senior class graduating every year. That is higher than the city average, which is about 65%; simply because students get special attention, because our mission really puts forward the skills that they need in college. Things that we do now include application workshops, SAT prep, the things that will help them get into college, that you just don’t get at public schools because there is no budget for those types of things. We even have a college counselor on staff full-time; our principal has to find a way to find her salary in the budget. Other schools don’t make that priority.

Are there any other things that the school does to arm them with the skills that other schools might not be teaching?

Carrie: One of the big ones that we talk about a lot is health and wellness. These are kids who come from an area with ridiculously high rates of childhood Type 2 diabetes, childhood asthma, and childhood obesity. Those are things we approach. In order to sit in the classroom and not fall asleep and get your homework done, you have to have three solid meals a day, and stay healthy and stay fit in order to do your schoolwork. So those are things we work on.

We have a garden at school, and a health curriculum with it that teaches kids about growing fresh produce and they bring home recipes to their families who might not be familiar with fresh produce either. You know, a lot of the families eat a lot of fast food because it’s what’s available and what’s cheap.

We built a climbing wall in our gym, it might be the only one in the Bronx, to give kids a fun and interesting way to stay fit. That’s used by a lot of kids with a lot of different capabilities. We pay a lot of attention to our athletic program as well because it’s a motivation to stay in school. They have to get a certain GPA if they want to play on a public school athletic team and if they are not a student by nature, it’s something they look forward to doing and coming to school for.

Do you think these smaller schools like the Academy of Letters are the future of education when the Department of Education on a national level isn’t able to have the funding for programs like these?

Toni: The funding issue is really complicated, I’ve spoken recently to Joan [Sullivan] with her new role in Los Angeles [as Deputy Mayor of Education] and she feels that public school as we know it can’t really exist and educated kids the way that it needs to. It needs private partnership, which is what we’re doing with an advisory board Bronx Letters. The budget cuts are so mind-boggling, you can’t believe what the teachers have to deal with. It’s shocking.

Carrie: We’re dealing with kids who are the poorest in the nation. We’re right near the Upper East Side. Well, the schools there don’t get a cent more than we do. The city calculated an amount of funding per kid, etc. But the difference is that in more affluent areas there are PTAs who raise a lot of money every year also to supplement what the city pays for, that pay for all kinds of trips and activities, and pay for things out of the families’ pockets. And our students don’t have that possibility. That’s why this advisory board exists.

Click here to find out more about The Urban Assembly Bronx Academy of Letters.