The Grammys Strike A Chord With Millennials 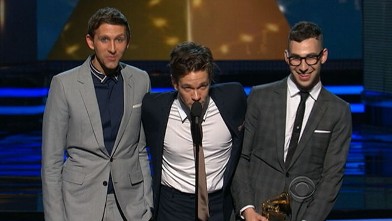 Today’s post comes from Youth Advisory Board member Rachel Voorhees, 20, who watched the Grammys last night and was impressed with how much the award show emphasized young artists. She explains how she and many of her peers felt while watching talented young acts dominate the music scene and they were eager to share their excitement on Twitter. From mashup performances to Carrie Underwood’s light show dress, it’s clear that the Grammys entertained Millennials.

The Grammys Strike A Chord With Millennials

Last night, music fans tuned in to watch the industry’s biggest award show: the Grammys. As a Millennial myself, I watched my generation share our voices throughout the night on Twitter using #grammys, and let me tell you, there was a lot to say!

This year’s show seemed to highlight many of the anthems that exploded with popularity among Millennials in 2012. The show opened with Taylor Swift singing her latest catchy breakup song, “We are Never Getting Back Together,” which took the teen pop culture world by storm this past year. There was some speculation that Swift mocked former boyfriend, Harry Styles of One Direction, during the performance by singing a rift in a British accent. This created quite a buzz among Millennials on Twitter since these artists are top of mind among many people my age.

Another big performer that everyone was talking about was Justin Timberlake. Timberlake made an excellent comeback performance that had young people reminiscing about growing up listening to his music. He is a true example of a Millennial success. When he was our age, he dominated the pop culture scene and it’s great to see that he’s back and ready to top the charts again.

In addition to solo performances, there were a number of collaborations that had Millennials talking. One worth mentioning included Ed Sheeran and the iconic Elton John’s performance of Sheeran’s song, “The A-Team.” The word of choice used to describe it among Millennials was, “perfection.”  Many award shows try to appeal to numerous generations simultaneously and in this case, it worked! Millennials also enjoyed Maroon 5 and Alicia Keys’s duet. Both artists have been topping the charts and their “Daylight/Girl on Fire” mashup was well done. This approach taps into the mashup culture that Millennials are used to, where we’re always interested in working together to create something new and innovative.

While the performances were amazing, let’s not forget that this is an award show so it’s safe to say that some awards were given out too. The newly popular band, Fun., took home the awards for “Best New Artist,” and “Song of the Year” for their song, “We are Young.” The latter was definitely well deserved as that song was one of the biggest power anthems for Millennials in 2012. Other artists that won for tunes popular among Millennials were Gotye for “Somebody That I Used to Know,” Skrillex for “Bangarang,” and Adele for “Set Fire to the Rain (Live).” Finally, Millennials would agree that the band The Black Keys is one to watch this year as they took home several awards and put on a stellar performance.

Aside from the music, two speeches made during the course of the show struck a chord among Millennials. The first was LL Cool J’s speech about musicians following their dreams at a young age and winding up at the Grammys years later. He mentioned some very popular artists of our time such as Justin Timberlake, Beyonce, and Adele, as they were once young singers with big dreams just like us. The second was the presentation about the Grammy Foundation, which works to keep music programs alive for young, aspiring musicians. It’s encouraging to know that there are so many opportunities ahead of us and that the award show celebrates young people.

Above all, the Grammys are so much more than an award show. It’s a show that allows Millennials to watch their idols achieve their dreams right before their very eyes. These artists that we love are the ones who create the anthems that motivate us to pursue our own dreams. In essence, it is all about the effect they have on Millennials and our relationship with them as well. We are the ones who shine light on the musicians being honored. We buy their music and we share our opinions about it on social media. We attend their concerts and support these artists endlessly. The musicians seen on the Grammy’s serve as an example of what Millennials are capable of and remind us to strive for greatness every day. The time for Millennials is now and it is our job to make sure that everyone hears the music that resonates with our generation.

Rachel is currently a Communications student at Adelphi University with a concentration in Journalism. After she graduates she plans to work in media, specifically for music promotions and/or non-profit. In her free time, you can catch Rachel singing and dancing with friends at a concert in New York City or doing volunteer work. She has a serious passion for pop culture and raising awareness about social issues both locally and globally. With her writing, Rachel hopes to keep readers informed about what’s happening in pop culture and how they can volunteer their time to a worthy cause. To learn more about Rachel, check out www.rachelvoorhees.net