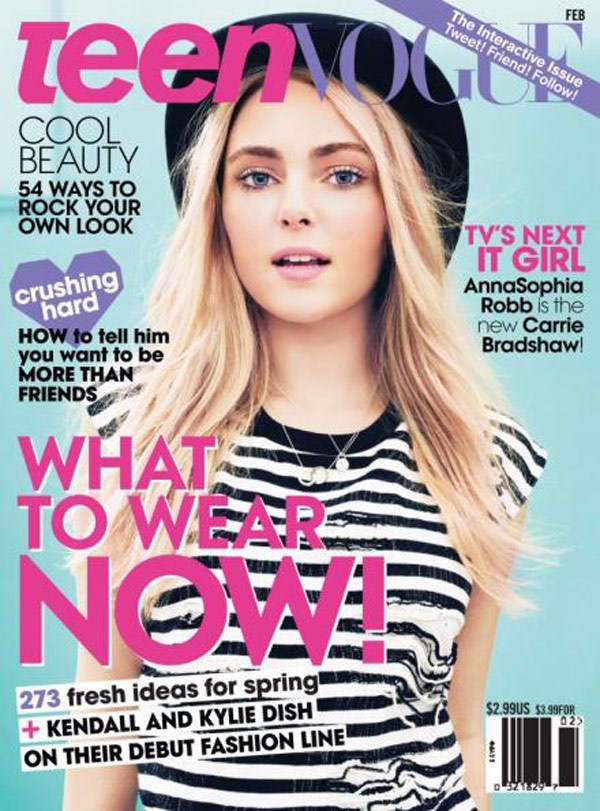 It’s a new year and a new chance to shake up your style! Millennials are certainly doing so in selecting bold and creative clothes that celebrate individuality. They aren’t afraid to take risks and are revolutionizing the traditional standards of beauty, as well as how magazines are read. Just take a look at the latest issues of Teen Vogue and Seventeen for proof…

AnnaSophia Robb, who’s proving to be the next “It Girl,” graces the cover of the latest issue of Teen Vogue. Her rising status is partially due to her coveted role as a young Carrie Bradshaw in “The Carrie Diaries,” the prequel to “Sex and the City” premiering on the CW next week.  AnnaSophia plays Carrie during high school, as she discovers herself, falls in love with NYC, and enters the world of dating. The magazine is packed with content about AnnaSophia, as well as the can’t-miss show, and tons of fashion that would surely make Carrie Bradshaw swoon.

However, the most noteworthy aspect of this issue is the emphasis on edgy styles. Millennials are putting more effort than ever before on being an individual and using fashion as a form of self-expression. A spread on teen bloggers highlights some of the most creative girls who aren’t afraid to show off their original and eclectic styles. Teens and twentysomethings are embracing clothes with character, which we’ll see even more of this spring. Teen Vogue highlights Mary Katrantzou’s collection for Current/Elliott, which includes jeans with postage-stamp and bank-note prints, as well as Liberty London and AG Adriano Goldschmied’s denim with floral designs. In fact, all types of denim, even denim on denim, will be in this season.

But besides wearing unique patterns or bold colors, young people are behind the shift in fashion, where style is about expressing yourself and there’s less emphasis on typical “feminine”  beauty. Whether they’re rocking short hair, intricate nail art, or studs, many young females are switching up their style. They’re dressing for themselves and they view fashion as art, not as a way to get a guy’s attention. Celebrities such as Miley Cyrus, Lady Gaga, and blogger extordinarie Leandra Medine of Manrepeller have made them feel confident to do so. Some are getting tattoos that are meaningful to them, while others are experimenting with dip dye or ombre hair. However, regardless of the particular look, Millennials are leading this major fashion movement.

Teen Vogue also addresses other relatable topics affecting young people today, such as falling for your best friend. Many are afraid to tell their BFF since they’re not sure how it will affect their relationship with that person. It’s a tricky territory, but before forming a relationship, many like having the foundation and closeness that they already have with a friend.

In addition to the content on the pages of the publication, readers will enjoy this interactive issue. By using the Teen Vogue Insider app, they can snap pages and unlock exclusive bonus content, access deals, videos, and more. Throughout the magazine, readers can find Twitter handles of the editors, celebrities, and fashionistas featured, as well as icons directing them to contests if they “like” Teen Vogue on Facebook. 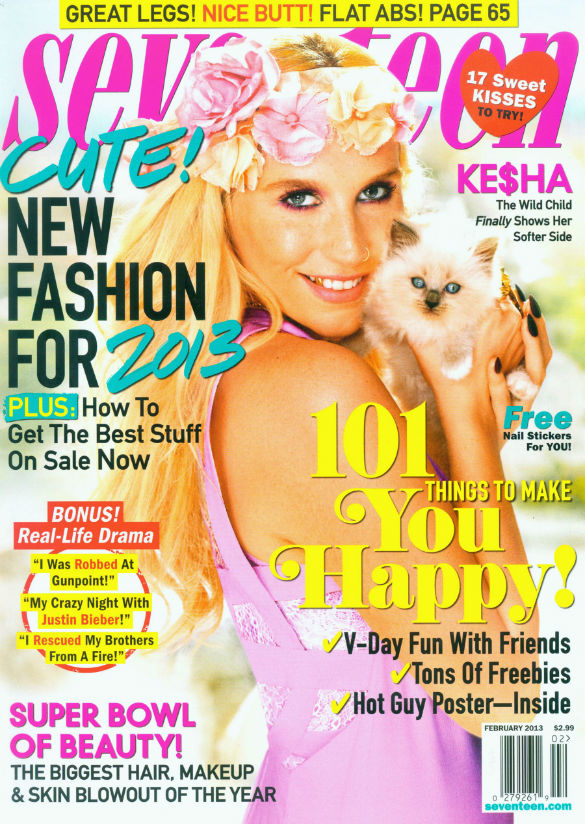 Ke$ha covers the February issue of Seventeen along with a cat, showing a soft side that many readers may not be aware of. After hearing how much fans look up to her, she decided to use her celebrity status to do good. She’s actively involved in various efforts including animal rights, gay rights, and anti-bullying initiatives. She’s even the first Global Ambassador for the Humane Society International! Although Ke$ha may seem tough with her fierce fashion and songs about partying, she’s really connected to her fans and causes. However, beware…she admits that her inner-warrior comes out when people harm her or others.

Interestingly enough, Ke$ha was bullied as a teen for being different; she wore wild fashion, made her own clothes, and dyed her hair purple. However, these aspects of creativity are celebrated in culture today and even helped launch Ke$ha to fame. Dealing with difficulties growing up made her strong and taught her that if you work hard, no one can get in your way. She hopes fans realize this too.

And in typical Seventeen fashion, there’s tons of stories about real girls who have gone through experiences other readers can relate to. From having a cell phone addiction to being un-accepted from college, teens and twentysomethings spill their struggles. Others have inspiring stories including a teen who saved her family from a fire, a student who landed a major book deal in high school, and a teen who’s persistence paid off and she ended up being Justin Bieber’s date at an awards show.

Seventeen also shows off some of the top colors we can look forward to this spring from emerald and plum to tomato and blush. You can even expect cool patterns including pale dots, wild florals, and nautical stripes. Fashion inspiration fills each page, including affordable ways to get top styles worn by celebrities. Seventeen and CollegeFashionista.com also teamed up to highlight the ways to dress for different occasions on campus.

In addition to clothes, beauty is particularly important to Gen Y and the magazine offers tons of makeup and hair tips, as well as product recommendations for readers. It even shows off beauty trends around the world, as well as fashion that embodies different cities.

Most pages direct readers to Seventeen.com where they can learn even more information and get exclusive content. There’s also images which encourage them to be part of the style conversation on social media and tweet pictures to @Seventeenmag. Youth are always connected, but magazines are finding innovative ways to make print and online content co-exist.