A Look Into The Crystal Ball: Top Trends For 2013 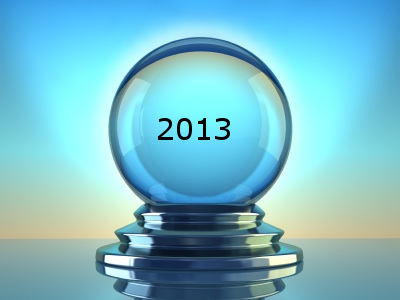 We’re always tracking trends, specifically how Millennials are influencing and shaping culture. They’ll be leading the way with major media shifts in 2013, stemming from their desire to make the world simply more intuitive. The following are five flavors of innovation we expect to see in 2013:

1. Dominance Of The Second Screen

Millennials already move between multiple devices when they watch television as they seek to always be entertained and of course, in communication with their friends. However, the second screen will play an even bigger role in 2013 as social TV becomes increasingly important to engage young viewers and cater to their short attention spans.

This year, we saw some major moves in the social TV space with Zeebox launching in the U.S., which allows users to see what shows are on, what their friends and celebrities are watching, and buy products they see on screen. Bravo also launched Play Live this year, a social TV experience where users get to interact with their favorite shows and ads by responding to on-air polls in real-time and see the results on their TV screen. Both of these, in addition to several other tools, have paved the way for the growth of the second screen. We predict that the event of watching, checking into, and interacting with a show will become the norm for Millennials next year, even more so than it is already, as their favorite shows air.

While live TV has some competition in the digital age, we’ll see a big push on the part of networks and tech companies in the coming year to connect the second screen with the first screen, creating active viewers and constant chatter.

Moreover, this year, we saw strategies such as Tumblr creating live-GIFs of the presidential debates. We wouldn’t be surprised if this is done for other major televised events including award shows, tapping into social sharing and the communal bond around interacting with the second screen.

Commercials created major buzz in 2012 with numerous big brands making impressive ads that entertain and engage viewers. Target released “Falling For You,” a short, shoppable film split into several parts with big-name stars. Viewers could see the high-quality commercial, and purchase the items featured in the video. Other youthful brands such as Juicy Couture and Asos also released shoppable videos, showing the appeal of this approach. And as 80% of Millennials say they want to be entertained by advertising according to a new study from Edelman, we expect to see more commercials like this in 2013.

Blurring the boundaries between commercials and content will likely continue to be the case next year. For example, Macy’s released a retailality (retail-reality) comedy called “What’s In Store?,” with several spots that tell a story and feature guest stars. This type of short-form content draws viewers in, giving them a plot to follow and a purpose for watching since it’s more than just an advertisement.

Viewers can also expect to see more commercials that serve as a show within a show, which is what Target and Neiman Marcus recently did with spots during ABC’s “Revenge.” The clips look like they’re pulled right from the program since they use the show’s characters and plot to keep fans hooked. Moreover, viewers were encouraged to look up the products advertised, drawing them into the second screen. We imagine networks will embrace this even more, knowing that Millennial fans seek content that’s an extension of a show or their favorite stars.

3. Omni-Channel Shopping To Take Over

In 2012, we saw the rise of mobile shopping, “showrooming”, and price-comparison checkers, but next year, to get customers in stores, omni-channel shopping will become even more mainstream. Some retailers, such as Bloomingdales, are already embracing this; earlier this year, the department store unveiled several interactive displays in its windows where shoppers could customize, “try on,” and even purchase items like Havaianas flip-flops or sunglasses. Uniqlo even unveiled a Magic Mirror in one of its stores, where shoppers could try on different colors and patterns of the same item simply by tapping a touchscreen. Virtual windows and dressing rooms will continue to pop up everywhere to reach tech-savvy shoppers who seek a special experience at brick-and-mortar stores.

Other features such as digital endless aisles and virtual mannequins will likely appear next year, breaking the boundaries of a store’s four walls and targeting Millennials in particular. Even ways to interact with their friends while shopping, share items, and get suggestions will continuously be embraced by stores since Millennials generally conduct social research before purchasing products.

In addition to the TV trends we mentioned, you can certainly expect YouTube to have a bigger role in 2013. Young people spend much of their time watching content online already with professional and amateur YouTube channels alike grabbing their attention. They’re turning to the site for original content that they can watch anytime, anywhere. YouTube even launched a production studio space in Los Angeles last month, which reflects just how large a role the platform continues to play in culture.

In 2012, we saw the creation of AwesomenessTV, a YouTube channel that airs a variety of content aimed at tweens and teens, and features musicians, athletes, TV, and social media stars. It has quickly become one of the top YouTube channels among this age group, and it will continue to present some competition for traditional TV channels like Disney, Nickelodeon, and Cartoon Network. Moreover, Smosh, a top YouTube channel about two Millennial comedians, has led the way with young viewers, as has Shut Up! Cartoons, an animated channel from the Smosh creators. Both of these properties prove the power of YouTube and how channels can generate as much buzz as traditional networks.

Slightly older female Millennials are turning to ClevverNews, for up-to-the-minute information and video content on entertainment, style, and celebrities. And Machinima, which has game-oriented content aimed at 18-34-year-old males, is also a key player in this space.

You can count on many more YouTube stars and professional networks targeting teens and young adults to emerge, as well as YouTube content to appear in other spaces. Cinedigm recently formed a partnership with Alloy Digital, where content from Smosh and Clevver Media brands could appear in movie theaters, home entertainment systems, and digital storefronts. YouTube is flipping the traditional media structure, and Millennials are shaping this trend.

2012 was the year of Instagram and Pinterest, as these visual sites became some of the fastest-growing and most popular social networks. Instagram has become a cultural obsession, where users snap pictures of everything from their food to their nails, apply filters, and share the photos with their followers and friends. “Instagramming” an image has become a way to communicate and as a Millennial recently told us, “Instagram is an amazing form of expression…people can show their feelings in just a picture and everyone pretty much understands.” Instagram in particular has created a culture of photo sharing, and, as new social networks emerge, we imagine they’ll have less focus on text and more on visual features. Even Twitter added photo filters to compete with Instagram, highlighting just how pervasive this trend is.

In 2013, there’s bound to be even more photo-sharing social networks and apps as visual content captures young people’s attention. MySpace is adopting a Pinterest-like interface, and the site focuses on images. Coca-Cola recently launched Happy Places, a photo-sharing service that lets users share joyful moments with their social networks. Overall, text is diminishing on social media with GIFs, Instagram pictures, and updates of 140 characters or less becoming key means of communication.