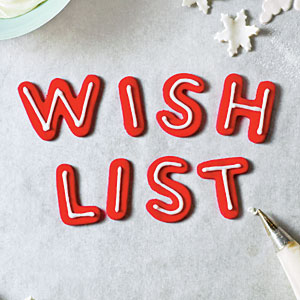 With the holiday season in full swing, we wanted to share what’s at the top of Millennials’ wish lists and provide insights on why these items appeal to them. So whether you’re shopping for Gen Y or your company seeks to attract this age group, here’s what they’re interested in this holiday season and beyond:

As you might expect, the majority of Millennials are hoping to get tech items this year. We recently surveyed 294 13-34-year-olds, and it’s no surprise that computers, iPads, and iPhones were among the most frequently mentioned presents they hope to receive. Technology is a lifeline for them and they seek the most up-to-date devices for entertainment purposes and to be constantly connected to their friends. Millennials mentioned wanting laptops in particular, which suggests that even though iPads and other tablets have many of the same features, they still want an actual computer to meet many of their needs. Tablets were still very popular, but presumably those who want one have a computer already. Overall, Millennials move between devices depending on their purpose or location, but they still seek to have several mediums.

Moreover, while many Millennials mentioned wanting computers in general, they’re most interested in obtaining Apple products. It’s one of their favorite brands and they know they can trust Apple for all their tech needs. Even 6-12-year-olds have caught the Apple bug with iPads topping their wish lists according to a recent Nielsen survey. This further highlights the influence of the brand, however, that doesn’t mean they aren’t interested in other tech companies. A handful of Millennials mentioned wanting the Microsoft Surface Pro, the Samsung Galaxy Note, and various versions of the Kindle. They also are interested in gaming consoles including Wii U, PS3, and Xbox, as well as special headphones.

But apart from these devices, numerous Millennials also indicated that they want a camera for the holidays. This generation values capturing experiences and there’s been an increased interest in photography in recent years. Sure, they can use their phones to snap and share pictures, but actual cameras are still relevant to Gen Y who appreciate documenting the world around them.

Money of course was also another popular item they hope to receive as a present, especially since they have limited funds. Many even said they want money towards or help with their tuition, which suggests how much they’ve been hurt by the economy and that they want practical presents. Some even regard the tech items they hope to receive as necessities since they can’t imagine their life without them and consider them crucial in culture today.

Clothing was also mentioned often, as were shoes, yet most of the clothing specified were practical items. Several Millennials said they want a new jacket, a raincoat, a fleece, or boots. Others indicated work clothes or accessories because they want to add small new pieces to their wardrobe to change up their style. And of course, gift cards were also mentioned fairly frequently since Millennials like to research items and consult their friends before making purchases.

Yet presents aren’t what the holiday season is all about and many Millennials recognize this. A handful said that time with family and friends is what they want most this year, as well as happiness. They view the holidays as a time to spend with their loved ones and they appreciate what they have, especially this year. It’s heartwarming to hear that while they are interested in gifts, they still know what matters most during the holiday season, and place emphasis on experiences and memories.