Millennials Reveal Who Represents Their Generation 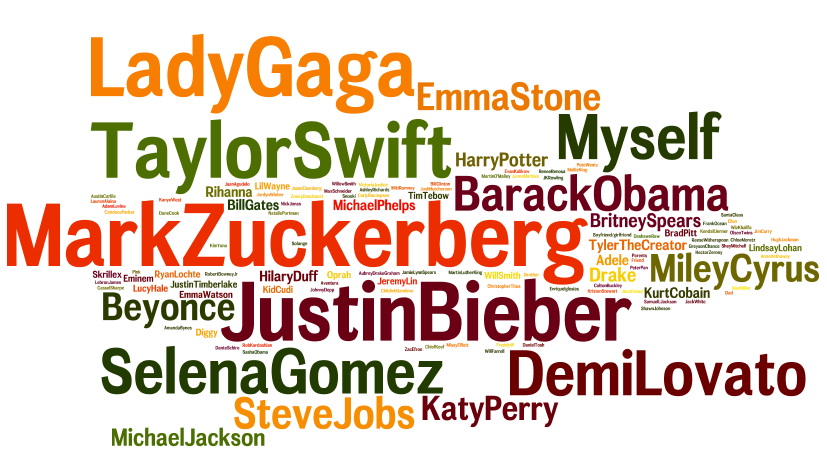 Mark Zuckerberg. Lady Gaga. Justin Bieber. These are among some of the top influencers among Millennials since they’ve induced innovation across society and paved the way for a generation of individuals who seek to make a name for themselves too. We recently surveyed 400 14-34-year-olds asking who they believe defines their generation, and it’s no surprise that some of the most creative, active, and cause-driven stars were the ones they mentioned the most.

Mark Zuckerberg is a top Millennial icon since he has achieved entrepreneurial success, which many young people hope to reach too. He had a great idea that’s shaped society and he brought it to life while still in college. They know his story thanks to “The Social Network” and feel a connection to him since he produced a product that is of huge importance to their generation in particular. Facebook isn’t just a way to communicate with friends; it’s become a lifeline for many young people to stay informed about the world at large. Many Millennnials aspire to create something as powerful as he did and they appreciate that amidst his success, he’s still laid-back, wearing jeans and hoodies to work.

Believe it or not, but Bieber is also someone who they feel represents their generation since he’s led the way in using social media to become a star. Many young people feel responsible for his fame as they found him on YouTube, contributed to his videos going viral, and were part of the inescapable phenomenon that’s become Bieber Fever. To many, he proves that anything is possible and you can use platforms like YouTube and Twitter to create a brand. His story is also very transparent since the public was part of his journey, and his rise to fame was depicted in the movie “Never Say Never.” But most of all, he’s shown that it’s possible to get recognition without going the traditional route towards fame, and he’s enabled other stars to do the same.

Taylor Swift is also an icon for many Millennials since she writes sincere and personal songs that are often compared to pages of a diary. Fans feel a close connection to her because of how open and vulnerable she is through her music. They also recognize how she’s brought country music to the masses, blending it with pop, but exposing many to a genre they may not have otherwise considered. She’s had impressive accomplishments, becoming the fourth female artist ever to sell a million albums in its first week, and she continuously produces songs that reflect her fans’ emotions too.

Few public figures celebrate differences as much as Lady Gaga, and her enormous efforts to make everyone proud of who they are certainly makes her a role model for Gen Y. “Born This Way” has become an anthem for Millennials as we’ve reached a point where young people are more accepting of differences. She’s given young people a way to understand this through song, and she stands up for causes she believes in such as LGBT rights, anti-bullying efforts, and more. She even launched the Born This Way Foundation and makes her fans, known as little monsters, feel special for being individuals.

Although Steve Jobs wasn’t a Millennial, he ranks high on their list of people who reflect the spirit of their generation. He had an enormous effect on technology, creating products that young people today can’t live without. He led Apple to becoming one of the top brands and Millennials have grown up seeing the progression of Apple from laptops to iPods to iPhones. Many want to be a creative guru, businessman, and inventor much like him and they regard him as one of the most accomplished people ever for his innovations.

Moreover, Demi Lovato is someone who teens in particular admire since she’s admitted her weaknesses, overcome struggles, and become a stronger person because of it. They find her inspiring for publicly addressing her flaws and seeking help. Her music, particularly her song “Skyscraper,” resonates with them in highlighting her experiences, and she’s since become involved in many causes such as Love Is Louder Than The Pressure To Be Perfect. We predicted that she (along with Taylor Swift and Selena Gomez) would be a Millennial woman of the year and she’s definitely lived up to this.

Besides being a favorite young star for many teens, Selena Gomez is someone who young people look up to since she gives back in many ways. She’s the youngest ambassador for UNICEF, is an ambassador for the Ryan Seacrest Foundation, and was recently honored at Glamour’s Women of the Year Awards. Teens view her as both talented and genuine, and she resonates with so many people for being humble and down-to-earth amidst her fame.

And of course Barack Obama is a favorite among Millennials, who played a huge part in helping him get re-elected. Many agree with his values and feel that he’s bringing the right change to our country, particularly in terms of social issues. He represents a major turning point in society as the first Black President and Millennials really appreciate how he understands their generation, both in terms of policies and his efforts to engage in mediums they use too.

Many mentioned other artists, including Beyonce and Katy Perry, whom they admire for giving back or standing up for their generation. Both these women encouraged young people to vote, Beyonce was a huge part of World Humanitarian Day, and Katy Perry is involved in everything from disaster relief to gay rights. It’s clear that these women connect with young people while also trying to make the world a better place. Moreover, others mentioned influential athletes such as Tim Tebow, Michael Phelps, and Jeremy Lin as people who define their generation since they’ve accomplished so much and are individuals that young people admire.

What’s also fascinating is how many Millennials mentioned themselves as the embodiment of Gen Y. Yes, this may seem obvious, and even suggests that they’re “Generation Me,” but it also reflects how much they believe in themselves and the power of their generation. They remain optimistic even when all odds are against them and they know that the future is in their hands. Moreover, according to Ypulse research, 86% of Millennials believe they’ll be able to accomplish their professional goals before they retire. They feel confident in their abilities to shape society and most of all, they’re passionate about what they believe in.