Author Brittany Geragotelis Spills On Self-Publishing, Digital Reading, And Her Successful YA Novel 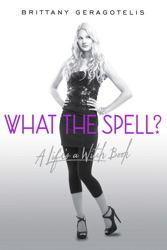 Life’s certainly not a witch for author Brittany Geragotelis. After garnering over 19 million reads of her YA novel Life’s A Witch online and creating one of the most popular stories on Wattpad, Brittany self-published her novel — a modern retelling of the Salem Witch Trials — and has since seen much success. Call it magic but soon after releasing her story, she signed with Simon & Schuster and has a prequel to LAW  titled What the Spell? coming out in three e-book installments starting this fall!

We chatted with Brittany — who’s been called the “Jeremy Lin of the publishing world” — about her path to publishing her second novel, the theme of bullying in her stories, and how new media is helping launch all sorts of talent, like herself, today.

For more information on Brittany’s first novel “Life’s A Witch,” check out our first interview with her and learn how her journey all began.

Ypulse: What was the process like of self-publishing Life’s A Witch and since then, how has everything unfolded?

Brittany Geragotelis: I was actually motivated to self-publish Life’s a Witch, because my fans on Wattpad who’d read the book and loved it, wanted their own copy. So, with the demand there, I decided there wasn’t a good reason not to publish it myself. I went through CreateSpace to do it and the process itself was actually very easy. The company has great customer service and any time I had a question or concern someone was on the phone within seconds. I was so happy with the final product when it was available for people to buy! Unfortunately–or rather, fortunately–the book was only on sale for a few weeks before we were approached by several publishing companies and went into an auction for the series. In the end, I really connected with my editor, Alexandra Cooper, at Simon & Schuster and knew that my book would be in good hands with them. Since then, we’ve sold the rights to Life’s a Witch in five countries and are talking to people about the film/TV rights! Now, all my fans can read the prequel to LAW, called What the Spell?, which will be coming out in e-book installments in the fall and then in hardback January 2013!

YP: How have you continued to work with Wattpad while self-publishing and signing a deal with Simon & Schuster? How has the community helped or influenced you?

BG: When I signed on with Simon & Schuster, we decided that it would be best to take Life’s a Witch down from the site, since we’d be re-releasing a new and improved version in the future. But I never had any intention of leaving my Wattpad fans completely. In fact, I think once I explained why I was taking it down, most of my fans understood. After all, a lot of those on the site are aspiring writers themselves and understand that if we champion and support each other, it means more untapped talent will be discovered on platforms like Wattpad in the future. And S&S knew that the bulk of my fans were on Wattpad, so it would be silly for me to disappear on them. So, we decided to all work together to promote me. I’m still very much involved with Wattpad; I’ve published two other full-length YA novels on the site as well as made appearances on panels and at events for them. We actually unveiled the What the Spell? book cover exclusively on Wattpad and I’m going to be writing some original content for the book and posting it on the site leading up to the release. My fans mean everything to me. They’re so supportive and ultimately the reason I am where I am today.

YP: What The Spell? is being released in 3 e-book installments. What made you and S&S decide to do this and do you think this is something more and more authors will embrace?

BG: I think one of the reasons that we decided to release What the Spell? in 3 e-book installments online a few months before the hardback version, was to give my online fans a chance to get their copy in a format that they’re used to. When I was publishing Life’s a Witch on Wattpad, I was posting a chapter every week and my fans would read it online or on their phones, so releasing WTS? in increments for $.99 seemed like a great way to let my fans get in on the action early and for a great price. I definitely think we’re going to see more pre-releases in the future. It’s a great way to punch up the excitement for a book before the hardback release.

YP: What can readers look forward to in What the Spell?

BG: What the Spell? is the prequel to Life’s a Witch, which is loosely based on the Salem Witch Trials but set in modern-day. In WTS? we meet Brooklyn, who’s actually Asher’s ex-girlfriend and the complete opposite of Hadley in LAW. The story starts when Brooklyn’s just about to turn 16 and come into her witchy powers. Having felt unpopular and invisible all of her life, Brooklyn dreams about being a part of the popular group at her school, called The Elite. So, she decides to perform a magical makeover on herself, finally getting the attention she’s always wanted. But popularity comes at a price and Brooklyn realizes too late that you have to be careful what you witch for. Just like in Life’s a Witch, WTS? has lots of magic, action and super cute boys!

YP: How do you balance writing several separate stories simultaneously?

BG: I think it’s all about putting your complete focus on whatever project you’re working on at the moment. For instance, if something’s going on in your life but you’re having dinner with a friend, you put that other thing on the shelf and turn all your attention on them for that amount of time. For me, it’s the same with writing books. Whether I’m writing for Brooklyn who’s really self-conscious or for Hadley who’s super confident, I make sure to put myself in the mindset of that character. I try not to write two books at the same exact time, but when it does happen, it’s all about budgeting your time and having a sense of the story and who your characters are before you even get started.

YP: What’s the process been like of selling your book in 5 countries?

BG: I feel like I know far less about the foreign sales aspect of publishing than I do of publishing in the U.S. With Simon & Schuster, I’m working side-by-side with my editor, the art directors, the marketing team, etc., and I’m aware of every stage of the process; but with my sales to Spain, Italy, Brazil, Catalan and Romania, a lot more is left up to the individual publisher. But this is when having an AMAZING foreign rights agent comes into play. My agent Taryn Fagerness knows what she’s doing and really is the expert on working with each publisher on the translations of Life’s a Witch. The cool thing is going to be seeing how people in the various countries react to the book and what covers they come up with for each! I have this dream of going to each of the countries I’ve sold in and seeing the book in stores. Now I just have to book the trips!

YP: You mentioned you’re talking to producers about movie/TV rights…what’s that been like and are there any updates for your readers?

BG: You know, with the sale of Life’s a Witch to S&S, everything happened rather quickly (after 10 years of rejection, of course), so I was sort of expecting the movie/TV rights to move just as fast. But what I’ve learned is that the entertainment industry is on a completely different time frame. We’ve had a lot of people interested from the beginning and we’re looking at all our options right now. I had the opportunity to meet with a producer a few weeks ago, which was really cool. The thing is, I always write as if my books are going to be made into movies or television shows anyway. I think of who I’d cast in each role. I can visualize each scene. So, the idea of having any of my books–Life’s a Witch or What the Spell?–put on the screen is UH-MAZING!

YP: What the Spell? touches on self-esteem and popularity, and even deals with the subject of bullying. Why did you want to write about these subjects?

BG: You know, even though What the Spell? is a paranormal action/romance, Brooklyn still deals with a lot of the same issues that most teenagers experience in high school: low self-esteem, body image, wanting to fit in and bullying. I wanted to talk about those things because I dealt with them myself growing up. I was bullied quite a bit and never felt like I fit in anywhere. At the time, my high school experience seemed tragic. And the more I’ve talked to teens over the years, the more I realize that I’m not alone in the way I felt. Bullying, the lack of acceptance of others and not feeling pretty or good enough…it’s an epidemic that just isn’t going away. I think it’s important for teenagers to know that it does get better. Eventually you graduate and people begin to accept you for who you are. And really, in the end, it’s not what you look like or your social status that matters out there in the real world–it’s who you are on the inside and the impact you end up leaving on the world.

YP: Yours is a real Cinderella story. After 10 years of rejection, you finally landed a sweet book deal. What would you say to others who might be discouraged while following their dreams?

BG: A reporter at Publisher’s Weekly once told me that I’m the Jeremy Lin of the publishing world. This was a huge compliment, because he’s the underdog who everyone rejected throughout most of his career…until someone gave him a shot and he set the basketball world ablaze. I feel like my journey has been sort of like that. And honestly, if you’re in any kind of artistic or creative endeavor–be it acting, singing, writing, etc–it’s likely that you’re going to be dealing with a whole lot of rejection. What I would suggest is never letting anyone kill your dream. Usually, rejection comes from a single person (a casting agent, a publisher, a record exec) and they’re making a snap judgment based on that one moment in time. They aren’t really answering for the world at large. And on top of that, we’re living in a really exciting time right now, where there are so many opportunities to put ourselves out there and pursue our dreams. The Biebs got his start on YouTube. Small-budget indie films like The Graduates can be made and then distributed independently through YouTube, Netflix and Hulu, and hit the #1 spots. And aspiring authors like me can publish their stuff online and build up a fanbase of hundreds of thousands, eventually landing a book deal. If there’s something you love to do, then do it. Practice, keep learning, share your gift with others and never give up. My mom always said that it only takes one yes for your dreams to come true.