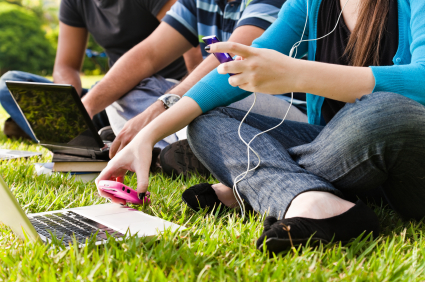 Today’s post comes to us from Matt, a Youth Advisory Board member who, like many Millennials, notices how often his generation switches from one medium to another in search of new entertainment and information. This frequent shift of attention among technologies — which occurs 27 times an hour! — has inevitably impacted social situations and how Gen Yers interact with each other. Yet, it’s also created a new definition of “social” as Matt explains weighing in on the pros and cons of having tons of technology at our fingertips. This desire to multitask and move between mediums creates a challenge for marketers as they have to work harder to capture Millennials’ attention, but they can do so by providing ads that are entertaining and worthwhile for the consumer…

To contact members of the Youth Advisory Board, you can email them at youthadvisoryboard @ ypulse.com or simply leave a message in the comments.

There were many lazy afternoons this past semester when I would be sitting in my living room with a couple of friends. The sun was pouring through our sliding glass door, the television was on, and music was blaring from my roommates’ bedroom. Meanwhile, each person was glued to their smartphone playing Words With Friends or another interactive game with someone who wasn’t even in the room.

I remember looking around the room and thinking that this completely sums up how technology has changed how Millennials interact. We have so many choices to be entertained and informed that it’s so easy to neglect what’s right in front of us, often the people we’re with.

But that’s not to say that technology has made us less social. It may, in fact, be the opposite; we can stay connected to more people than ever through Facebook, Twitter, and the myriad of social media options available on the Web. The question is whether these are meaningful connections that we make and maintain through technology. Is it socially healthy for “liking” and retweeting to replace face-to-face conversation? To what extent should Internet connections comprise our social interactions?

Although social media clearly isn’t going anywhere, I think this is an important question to explore. We’re not in danger of becoming hermits glued to the screens of our laptops and iPhones, but you can’t deny how drastically social interaction and information sharing has changed in a short period of time.

It wasn’t long ago when you had to wait until 5pm for the news, tune in at the same time every week to watch your favorite television show, or make the trip to Blockbuster to rent the movie of your choice. I’m old enough to recall having to memorize my friends’ home phone numbers before habitual cell phone usage became a way of life.

Nowadays, the news updates itself to our phones and laptops, and OnDemand avoids any inconvenience that comes with entertainment. And, like most people, I don’t have a single friend’s phone number memorized anymore.

A recent study commissioned by Time Warner’s Time Inc. found that Millennials — or digital natives — switch media about 27 times every non-working hour, a staggering number that underlines the short attention spans of those raised in a time where immediate news and entertainment was made possible by technological advancements.

By comparison, digital immigrants, who grew up with “old school” technologies like TV, radio, and print, switched media 17 times per non-working hour. Perhaps most importantly, this discrepancy suggests that being raised in a technological era not only means we use it more, but we also depend on it more.

Are Millennials so dependent on technology that we are incapable of sitting through a half-hour TV show without “changing mediums,” upwards of 13 times?

Although this seems like a high number, the concept really isn’t that far-fetched.  With so many entertainment options available, why would we bother sitting through a three-minute commercial break when we could conceivably communicate with multiple people through multiple different mediums during that time span?

The people that are really hurt by this phenomenon are the marketers. I don’t envy the person faced with the task of reaching the new generation of perpetual entertainment seekers and short attention spans.

As commercial breaks grow less successful in drawing the attention of Milllennials, alternative forms of marketing may well come to the fore. Product placement has been particularly effective with the young demographic, a strategy that was no more evident than in the final season of Entourage. During it’s last season, the hit HBO show adopted a subplot involving a secondary character, Turtle, who invests in Tequila Avion, a brand of tequila that gained enormous publicity from the show. Mentioned (and perhaps shamelessly plugged) throughout the season, the show implemented the brand into the plotline and created a marketing scheme that dedicated viewers couldn’t possibly avoid.

It’s a marketing strategy that was both (relatively) cheap and effective for the company, using character dialogue to publicize the taste of the drink and its popularity with celebrities. And we love to do what celebrities do.

“As a small independent, we know all the big boys would crush us if we try to compete by making a bunch of traditional media buys,” said Ken Austin, co-founder and chairman of Tequila Avion. “But we know a lot of folks in the entertainment business, and if we can keep people talking about us without having to spend a lot of money on TV and print (advertising), we’re just going to keep growing from here.”

Similar alternatives to traditional marketing should become more common in light of the shortened attention spans of the new generation. If we gloss over pop-up ads and won’t sit through commercial breaks, marketers will have to incorporate advertising within our entertainment.

It then becomes a trade-off; we wish to be perpetually entertained, but the product we observe may arguably be compromised by advertising and product placement.
In the end, our need for desire for constant fulfillment means we’re choosing quantity over quality.

Matt is in his final semester at Hobart College, where he studies Public Policy and Writing and plays for the tennis team. When he’s not in the classroom or on the court, he loves to share his opinions about anything and everything media related, particularly the influence the media has on public opinion. His random assortment of interests includes sports, trivia, nightlife, and a recently uncontrollable affinity for electronic music. These days, Matt spends most of his time reminiscing about college and living life to the fullest until he moves on to a post-college journey that promises to be full of more wild adventures!