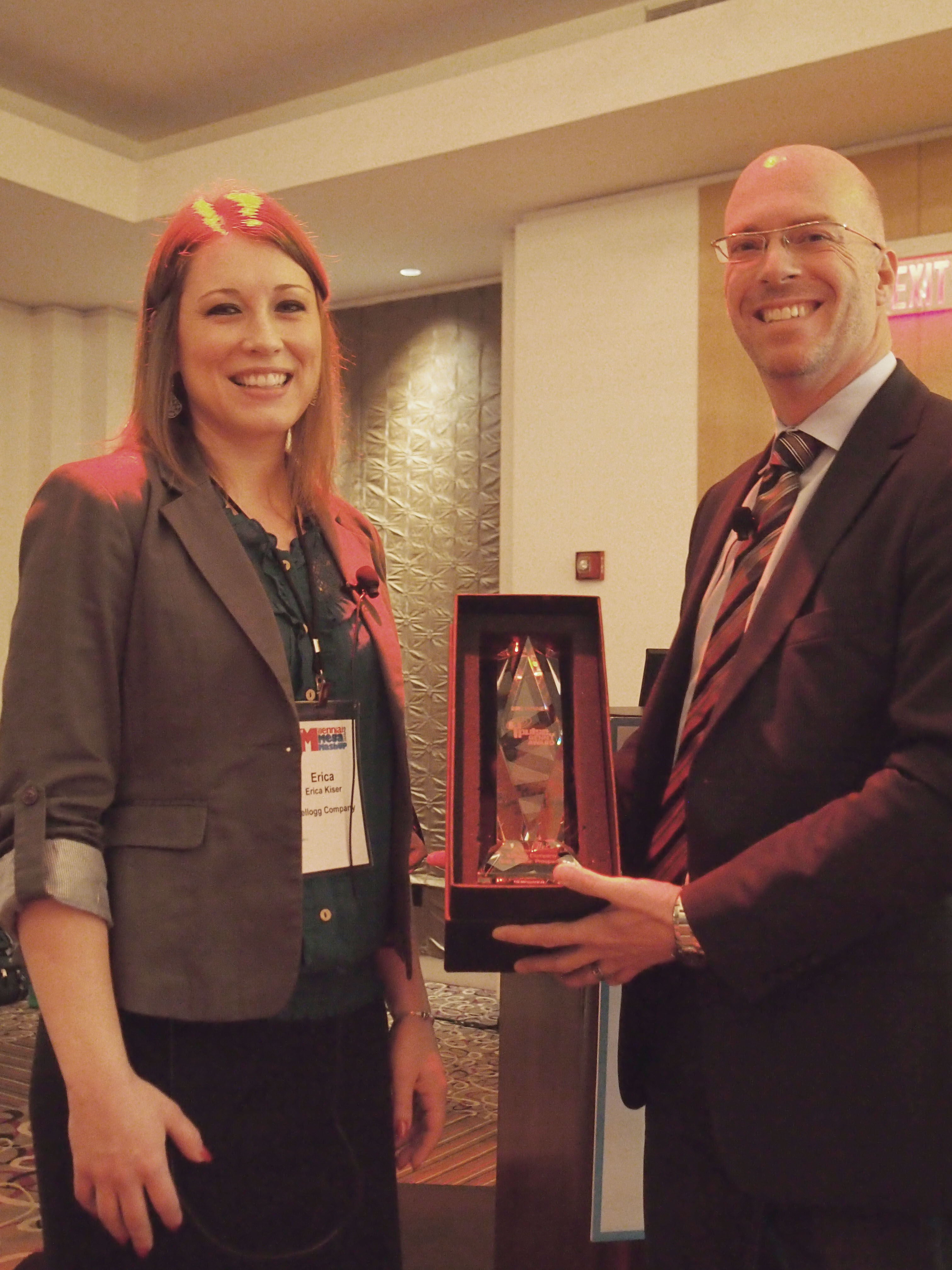 We want to congratulate Kellogg’s on winning the 2012 GennY Award for its innovative campaign aimed at college students. “Eat. Share. Propser.” leveraged the Millennial ideal of social activism within their local communities, turning a routine event — eating a bowl of cereal — into an opportunity to give back. The one-to-one campaign donated a bowl of cereal to local food banks for every bowl that students ate. We talked with Erica Kiser, Marketing Manager for College & University, who accepted the award at the Millennial Mega Mashup on May 9, about the success of the campaign.

Ypulse: We loved that this campaign took a daily routine moment (breakfast) and turned it into an opportunity to give back. How important is it to make social activism that easy for Millennials?

Erica Kiser: We know Millennials are social-minded, and convenience is an important part of driving participation. Millennials are also busier than ever, juggling classes and extracurricular activities, connecting with others through multiple media, and also living on their own for the very first time.  It is difficult to break through the noise to be heard.

What seemed to resonate with Millennials was the transparency and simplicity of the program. We simply gave them an opportunity to make a positive impact by doing something they were already doing – eating breakfast.

YP: The “one-to-one” giving aspect of the campaign really resonates with Millennials — how were you inspired to incorporate that into a Kellogg’s initiative?

EK: Millennials are more likely to participate in a cause if they feel that they personally can make a difference. The “Eat. Share. Prosper.” campaign was centered on the ability of the individual to make that personal choice to make an impact in the community.

YP: How did you promote the “Eat. Share. Prosper.” campaign on campuses? Did you use social media? Brand ambassadors? Something else?

EK: Our primary tools for communicating the “Eat. Share. Prosper.” campaign were on campus with printed materials such as flyers, napkin inserts, counter cards, and posters. We also provided participating schools with a “social media how-to guide” to help them further engage with students on their campus. Several campuses held kick-off events in conjunction with the local Feeding America food banks to promote the start of each campaign, complete with appearances by Tony the Tiger. Students took pictures at these events and posted them to Facebook to create even more buzz around the campaign.

YP: Did you include any competition aspects between schools? How did you keep students informed of the progress of the campaign in their communities and nationally?

EK: Kellogg’s made the decision early on to make this a local effort. We were interested in empowering students to fight hunger in their local communities. We worked with each school individually to inform students via local press releases and social media posts after the campaigns as to how much cereal they consumed and ultimately donated to their local hunger relief organization.

YP: Kellogg’s is planning to continue the campaign next year; will you be making any changes based on what you learned in the past year?

EK: This was a great program that resonated with students and let them make a real difference in their communities. As we look at plans for the future, we’ll be looking to social media and other new tactics to engage even more closely with participating schools and students.

YP: Campuses were able to customize the marketing and messaging tactics used; what were the most successful/most chosen tag lines and displays?

EK: “Choose Kellogg’s and Help Fight Hunger” and “Enjoy One. Feed Another.” messages were chosen most often. Each individual school gravitated toward the message that they felt would resonate most with their particular students best and that flexibility and choice benefitted our program.

YP: The campaign title “Eat. Share. Prosper.” strikes a chord — how did you devise the name to resonate with Millennial values?

EK: Millennials love brands that help them express their individuality. When developing this program, we asked ourselves, “What exactly do we want Millennials to do?” “Eat. Share. Prosper.” was our simplistic attempt to communicate the value and benefit to the program in as few, impactful words as possible.

YP: And finally, what is one important thing for the world to understand about Millennials?

EK: Affiliation with a cause is more important to Millennials than to any previous generation. They see the value in connecting and engaging with their peers so that they can have a real impact on causes both locally and nationally. As a result, this generation’s purchase decisions are heavily influenced by their opinions of a company’s cause marketing initiatives. Millennials value charitable contributions via cause marketing because of the ease of participation and the scope of impact in comparison to an individual donation.