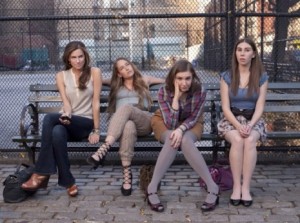 If you haven’t heard about HBO’s new show, “Girls,” directed by and starring Lena Dunham, you’ve probably been living under a rock for the past few weeks. It’s been years since we’ve seen so much virtual ink spilled overa television show, particularly one targeting women.

Wading among the “I LOVE this show” and “I have SO MANY problems with this show” reviews, we find ourselves somewhere in the middle. At times, it’s scary how much the show manages to reflect our lives (have they bugged our apartments?), but then minutes later has us saying, “Really?! No one’s that clueless!”

Ultimately what we’ve realized is that there’s such a reaction to this show because there’s nothing like it on TV, no other show that depicts relatable 20-something women. There are plenty of shows that offer dramatic fantasy and escapism — the networks have you covered when it comes to vampires and rich kids — but not so many that try to show regular women, with all of their problems and flaws, in their day-to-day lives.

But that is part of the difficulty with “Girls.” The show aims for realism, which can be a little uncomfortable for the viewer who either ends up reliving difficult memories — like the time they said the wrong thing in an interview or the myriad bad decisions they’ve made in relationships — or is pained watching characters make one poor choice after another. Maybe the reason there are so few shows that focus on 20-somethings is because growing up and figuring oneself out is such a messy process, full of frustration and mistakes that we’d rather forget than relive now that we’ve learned our lessons.

On the other hand, those same everyday banalities are what make “Girls” endearing — the show also lets us relive dancing around the room with friends blasting our favorite song and all those too-honest conversations over ice cream as we took baby steps toward becoming adults.

Millennials may not have invented the “show about nothing” genre that follow people through their daily lives, but they are the perfect audience for it. A large part of their entertainment consists of following their friends’ lives on Facebook and Twitter. That includes laughing with them at the mistakes they make and enjoying the little things and inside jokes that make them feel connected. Unlike those escapist TV shows, “Girls” brings out those same feelings too, helping its Millennial audience feel connected to the characters.

“Girls” airs on HBO on Sunday nights, and the network is also streaming episodes online starting the following day. Watch and let us know what you think of this take on Millennials’ lives — and stay tuned for a review from one of our Youth Advisory Board members…