How Music Got Its Edge Back: Indie Meets Rap 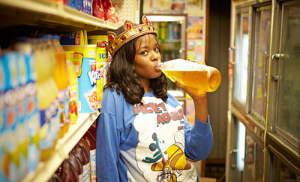 Hip-Hop and rap are experiencing a strong resurgence of late (don’t call it a comeback!). After years of indie rock and pop ruling the airwaves, young people are looking for a new sound to call their own, branching out into electronic and rediscovering rap.At SXSW this year, fans could catch shows from heavy hitters including Jay-Z, Eminem, 50 Cent, and Wiz Kalifa, as well as lesser-known acts.Dr. Dre and Snoop Dogg are headlining Coachella this summer.

The meshing of the indie and rap scenes is having an interesting effect on music. Taking a cue from indie bands, newer acts like Azealia Banks are creating a new sound that could almost be called “Indie Rap.” The Harlem-native’s songs are most definitely “R-rated” and fierce, but instead of rhyming about “thug life,” she raps about urban life, making her badass, but also relatable. It’s that cross-over potential that brings both rap fans and indie fans to her shows.

Urban music needed an infusion of edge to recapture the attention of young people. Hip-hop legends like Jay-Z and Kanye have gone mainstream, getting wider airplay and gaining older fans (while simultaneously cleaning up their style, rapping less about illegal activities and more about luxury lifestyle). Young music fans were looking for something to call their own — music their parents wouldn’t listen to but that they could still relate to. It’s the same reason they’re straying away from the indie genre: hipsters and soccer moms aren’t supposed to like the same music.

In the same vein as acts like Odd Future, Azealia Banks is making her mark by being irreverent and very NSFW, simultaneously alienating older audiences and intriguing young Millennials. The video for her biggest hit so far, “212,” has been viewed more than 7.5 million times, but contains so many naughty words (both spoken and spelled out on screen) that any parent would be horrified to think of their child listening to it… You can almost hear the stampede of teenagers seeking out what their parents have banned.

It’s nearly impossible for the mainstream marketing community to approach acts like Banks or Odd Future. Yet, the retail world is beginning to take notice, starting with high-end fashion houses, which have never shied away from controversy. Banks has worked with the likes of Karl Lagerfeld and Nicola Formichetti, performing at private events and having her music incorporated into runway shows. She’s earning indie cred while maintaining her street-tough rap roots, and she’s building her fame on that formula with her latest single, “F*** Up The Fun,” which is capturing the attention of both indie and hip-hop media.