In preparation for Halloween, horror content is ramping up across streaming platforms, traditional cable, and theaters—and this year, Paramount is setting themselves apart with a unique and risky marketing strategy that was able to grab the attention of millions. The film’s director, Parker Finn, had his fingers crossed when Paramount pitched the idea to set paid actors in the background of Yankees and Mets games and have them perform the creepy smiles that haunt the main character of the movie. Finn said he feared no one would even notice, but they certainly did.

Here’s some fun, clever movie promo – Paramount seemingly placed #Smile actors in the crowd at both the Yankees and Mets games last night, both in view of cameras. The results were indeed creepy. Going to a game this weekend? Watch out for the smiles! 😃 pic.twitter.com/aC3sqZjWvI

The ploy did in fact go viral; social media was in an uproar over the “demons” in the background of the MLB games. Fans were calling out the actors who were strategically placed in seats behind the home plate to ensure they were always in the main camera’s shot. They took to Twitter to at first express their confusion with tweets like, “Thanks for the 6 months of nightmares,” “Stop showing her please. I plan to go to bed shortly after the game,” and “Make it stop.” But after realizing it was in promotion for Smile, it was called “genius marketing.” They’re not stopping there, though: on Twitter, the hashtag #SmileMovie will now animate the like button on tweets using it to an emoji of the scary grin.

As September comes to a close, Gen Z and Millennials are gearing up for spooky season—and for some of them it’s already started, marked by the return of the PSL. Nearly all Gen Z and Millennials tell YPulse they’re planning to watch some kind of Halloween programming this year; and while their top choice is Halloween-themed/ scary movies / TV episodes on streaming services, Smile’s unique marketing was able to catch the attentionmillions of viewers and is sure to bring them to theaters this weekend. Young people are in love with Emma Chamberlain’s designer house

Millennial influencers proliferated the all-white-everything house trend, but maximalism-loving Gen Z is turning the tides on home decor. And Emma Chamberlain (freshly 21, making her a Gen Z cultural icon) has given them all the inspiration they need for their dream home goals. She debuted her LA home in an Architectural Digest tour this week, and it’s gone viral across platforms. On TikTok, AD’s five snippet videos from the tour have racked up over 12M views collectively—the most popular of which shows off her mint green kitchen, and received 790K likes in the last two days.

emma chamberlain's home… god I have seen what you've done for others and I want the same for me pic.twitter.com/4loz5Q23xK

On YouTube, the “Open Door” series video has more than 3M views. On Twitter, still images of the house have gone viral, too, with posters in awe of the mid-century modern / eclectic style living rooms, bedroom, dressing room, and even bathrooms. (Which, when you see the honeycomb marble in her shower, you’ll understand.) Some compared her home to their other AD favs, namely Troye Sivan’s, David Harbor’s, and Dakota Johnson’s, whose all fall under a similar aesthetic category.

The green kitchen is perhaps the real crux of virality here, though, between the skylights, sage cabinets, and the focal green marble countertops that the internet is nothing short of obsessed with. But, for her long time fans the kitchen is even a point of pride; one fan commented “The way she used to stand in her mamas small apartment kitchen drinking coffee and now she’s in her own custom built 😭 hard work pays off.” Indeed, Chamberlain is the social media success story every aspiring influencer dreams of being, going from iced coffee runs to her own coffee company, and walking the met gala in just a few short years.

On other TikToks, like one showing her corn shaped side tables by the pool, viewers commented how Chamberlain is “so ahead of our time” and “always ahead of the trends.” And, really, she is one of the trend setters for this gen. She’s been a style leader since the days of “VSCO girls,” and now, she’s inspiring the aesthetic loving gen to think beyond their clothes and into their homes—beyond custom neon signs and accent walls, to cozy indoor / outdoor vibes and more sage green everything. 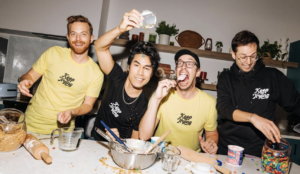 For Gen Z and Millennials, internet drama and gossip is often juicer than celeb news. As generations who grew up with the internet, and spend the majority of their free time watching YouTube videos, they’ve grown attached to the creators they watch and have formed deeper connections than with any other mainstream celebrity. For The Try Guys, a group that has been popular on the platform since 2014, the shock of a cheating scandal rocked the internet.

The Try Guys (Ned Fulmer, Keith Habersberger, Zach Kornfeld, and Eugene Lee Yang) started out on BuzzFeed as a group of seemingly basic dudes who participated in comedic adventures each week. But as their popularity grew (and a slew of other creators left the company) the Try Guys branched out on their own in 2018. Their successful videos of them trying on thongs, participating in drag competitions, and using a birthing pain simulator has landed them 7.85M subscribers on their YouTube channel and a show on Food Network.

But this week Ned Fulmer, the guy who made loving his wife his entire personality, made the group go viral as photo evidence of him cheating with one of their employees surfaced. Not only did the news shock the internet, it made Gen Z and Millennials who grew up watching their content say they don’t believe in love anymore.

Since the news broke, the three remaining creators formally addressed their followers in an Instagram post stating that Fulmer is no longer a part of the group. While this may just come off as another seemingly insignificant cheating scandal, the internet’s response (and YPulse research) proves that for Gen Z and Millennials, influencers impact them and matter more to them than traditional celebs. Last week’s scandal involving Adam Levine was nothing but a meme, but for YouTubers they have been watching since they were kids, the same kind of news hits home. YouTubers are the public figure young people trust most, and incidents like this feel like a break in their social contract of relatability, authenticity, and parasocial best friendship. 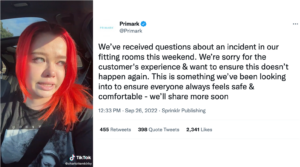 Charlotte Kirby was in a Primark dressing room when two men walked in on her, opening the curtain despite it being clearly in use. While Charlotte was luckily dressed when they walked in, the experience left her shaken and resulted in Primark staff having to walk her to her car in fear for her safety. Once in her car, she took to TikTok to share her experience, in hopes of raising awareness for other girls who may be using Primark’s changing rooms and to not do so alone. The video received 2M views, and nearly 200K likes in the few days since it was posted. Primark released a statement on Twitter in response, saying they’ve been looking into the issue “to ensure everyone always feels safe & comfortable.”

Though Kirby was quick to praise Primark staff for their support and handling of the situation, and voice her support for the inclusivity that unisex facilities provide, the incident still raised questions of women’s safety within unisex changing rooms. Despite Kirby saying in a follow up video that she did not intend for the video to start the unisex-or-not discussion, it’s been a huge part of the response in the thousands of comments on the original TikTok. The majority of the comments are praising Kirby for sharing her story and bringing awareness to the situation, and offering Primark advice on how to improve the unisex changing room’s to make it a safe space (like simply adding doors with locks). But, some replies have turned into anti-trans talks, especially after J.K. Rowling reposted Primark’s statement with an article on the dangers of unisex changing rooms.

Rihanna is playing the Super Bowl after years of no performances, and fans are going wild

TikTok: No one can understand how this family made their perfect, floating Stranger Things Halloween decorations

Users in Florida are livestreaming the destruction of Hurricane Ian

Music: Paramore is fueling more indie grunge nostalgia by finally releasing a new song, and a whole album is on it’s way