Don’t Worry Darling, MrBeast, and #AngryFace on The Viral List 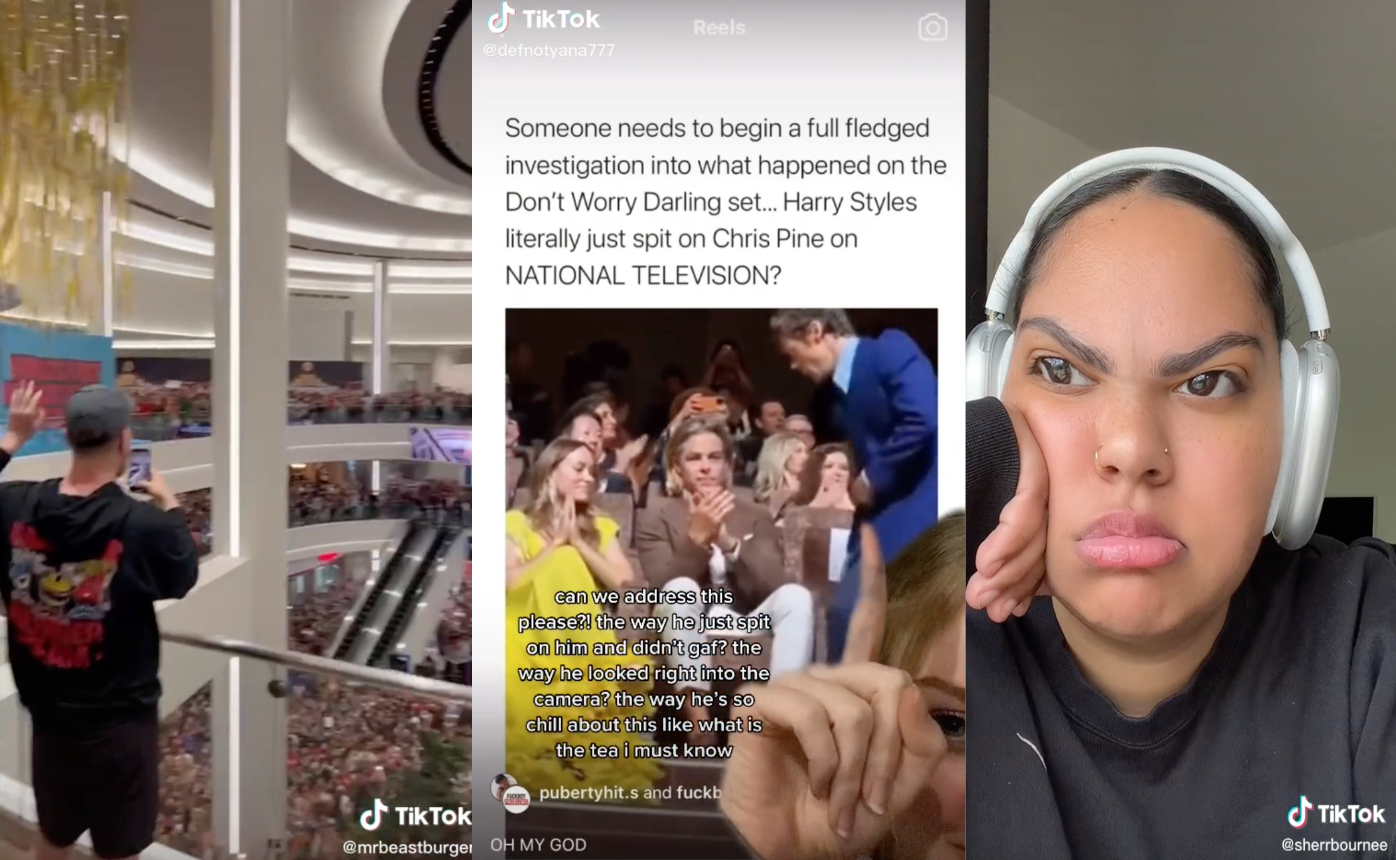 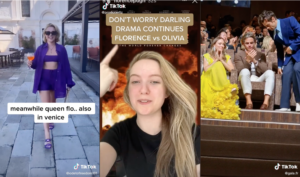 Drama has been brewing for weeks now about the upcoming film Don’t Worry Darling because of rumors of cast disputes, but the internet really took hold of every momentary interaction between the stars in clips of the Venice Film Festival this week. To explain the whole timeline would take too long, but plenty of TikTokers have taken the responsibility of getting every detail, and the #DontWorryDarling has 1B views (and the movie isn’t even in theaters for two more weeks). But, of course, the parts of the drama that hit everyone’s timelines and for you pages were the ones that became memes.

At the core of it all is Miss Flo herself; lead actress Florence Pugh skipped the festival’s press conference, but owned the red carpet, eliciting support from her fans for standing her ground in the alleged disputes with director Olivia Wilde. At said press conference, her co-star Harry Styles gave an interview where he said his favorite thing about the movie was that “it feels like a real, like, you know, ‘go to the theater’ film movie.” The memes rolled in quickly, and some brands even got in on the trend; Delta airlines tweeted “Our favorite thing about airplanes is that they feel like airplanes ✈️.”

Even more dramatic for Styles was a video in which it appeared he spit on co-star Chris Pine (which Pine has confirmed absolutely did not happen). The original video has been removed, but the speculations persist nonetheless. Chris Pine was also the center of another Twitter meme because of a photo snapped during the infamous press conference where he was looking blankly off into the distance, and well, the memes practically wrote themselves. One especially popular tweet captioned the image “me filling the room with negative energy bc i don’t wanna be there.”

In other film festival news: Timothee Chalamet says he thinks “it’s tough to be alive now” and  “societal collapse is in the air” 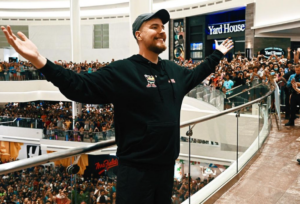 Top YouTuber MrBeast created his uber-successful fast-food restaurant MrBeast Burger in 2020, but operated only out of “ghost kitchens,” making it available at select restaurants around the U.S. YPulse told you about the chain’s initial success back in February, when it went viral that in just two months, MrBeast Burger had collectively sold 1 million sandwiches. This week, the burger business set down roots in the American Dream Mall in New Jersey, and suffice to say, it was a huge success.

The announcement of the location came in a MrBeast video where 100 fans were invited to play a $1 million game of hide-and-seek inside the mall (which has racked up nearly 28 million views so far), just one day before the store would open. But, even on such short notice, thousands of fans filled the mall in hopes of meeting the creator (whose real name is Jimmy Donaldson) on the opening day. And because of them, the opening was record breaking—the store sold more burgers in a single day than any restaurant before it.

And given that Donaldson has recently surpassed 100 million subscribers on YouTube, it’s not exactly hard to imagine why he’s been so successful. YPulse data shows that Gen Z especially loves YouTubers, and nearly half say they’re more likely to buy a product their favorite online celebrity recommends. Gen Z is also significantly more likely than Millennials to say that they’d rather spend an afternoon with their favorite online celebrity than their favorite mainstream celeb, so despite Donaldson recommending fans not all come at once, there was no doubt the turnout would be immense.

Also for influencers: TikTok’s fav on-the-street interviewer, and the corn kid has been named the official Corn-bassador of South Dakota 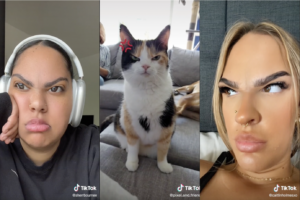 Our New Content Creators trend research shows that about half of young social media users use a filter to edit their appearance before posting, but sometimes trending filters are not always to look their best. This week, a distorting filter that gives users extremely furrowed brows and a frown, aptly named the angry face filter, is flooding TikTok. Users are setting up a scenario where someone says something to disappoint them or make them angry, and #AngryFace has amassed over 44.6 million views. The various (comically) negative situations are all to the melancholy sound of Exotic by Sayma Nabila (which has 274K videos on the audio, most from this trend).

One version by @cianaaaao, which has gained 32K likes, she suggests to her partner they “go to Target, Ulta, or maybe Hobby Lobby,” to which her partner (played by herself) responds, “no you don’t need anything.” Obviously, this was not the desired response, and the video flips back to show her with the intensely angry face. But other users aren’t mad just over disagreeing: @d_reppin says in her video, “We need to really start saving money” to which her partner agrees, “You’re right, let’s eat at home tonight.” The video ends with her cooking angrily with the filter distorting her face, because while she is the one to bring up eating in, what she really wanted was for her partner to suggest just going out instead.

Other top videos from @pixel.and.friends (119K likes) show the filter on their cat, when the owner refuses to throw the other pets outside, and @jeramieayala (15K likes) when no one dances with him at a function. All ultimately ending with #AngryFace, the trend is about being validated and the desire for a partner-in-crime who supports all your endeavors; like going to Target to browse all the new fall scented candles and, of course, stopping at Starbucks on the way there. 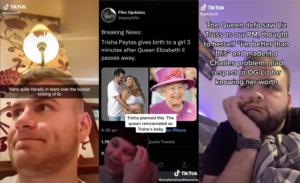 Queen Elizabeth II has passed away, and young people responded as they often do: with memes

Despite her declining health over the past year as she withdrew from events, Britons were still shocked by the news of the Queen’s passing. Many came together to mourn or take to social media to spread their grief, but for some, just disinterest. The younger generations, of course, are taking the time to fill feeds with dark humour; theories of reincarnation, Love Island memes, and even outfit inspo. BBC radio one went viral last year over their announcement of the death of Prince Phillip mid-song, and they’ve done it again, interrupting a heavy dance tune with a short announcement before restarting the song again. The announcements fit Gen Z’s outlook perfectly, as they’ve responded largely with a general “oh, how sad…oh well.”

The most popular memes were created within mere minutes after the announcement. Twitter users are speculating the reincarnation of Queen Elizabeth as YouTuber Trisha Payta’s child (Paytas announced they went into labour at the same time as the announcement of Queen Elizabeth’s declining health) and others joke of a fight with Princess Diana in the afterlife. On TikTok, the goldmine for Gen Z engagement, creators have shown the bizarre comparison of an uncaring younger gen and upset older gen. One shared their Nan’s heartbroken reaction to the news, while they uncomfortably watchon and a family member tells her “come on, you don’t know her.” Reporters from CNN asked people’s opinions on the royal family, and one interview with a young woman encapsulates the viewpoint of younger generations perfectly: she says she isn’t “the biggest fan of the Queen, or the monarchy in general,” so she wasn’t “that upset or overwhelmed by it.”

And many share her perspective on the royal institution; users are trending hashtags to get onto the timelines of those who might not have already known about the dark, colonialist past of the British Empire. The Irish, for example, have taken to social media to celebrate—dance group Cairde has taken TikTok by storm by Irish dancing in front of Buckingham Palace to Queen’s song “Another one bites the dust.” Even Americans have shared posts acknowledging the wrongs the Queen oversaw. Singer Phoebe Bridgers shared an Instagram story mourning “all the stolen, violated and traumatized lives who were affected and destroyed during Queen Elizabeth II’s reign.” Another viral tweet pointed out the hypocrisy of the U.K. system for letting many go cold and hungry due to the cost-of-living crisis, while watching a funeral that will cost billions. But, even as many discuss the abolishment of the monarchy and look forward to a possible day off, it looks like all generations can agree that getting used to “God Save The King” is going to take some getting used to.

Before and after videos are inspiring super expensive college dorm makeovers

Twitter: What is the secret third thing everyone is tweeting about?

Top of the charts: New Netflix original thriller show Devil in Ohio is at the top of the trending chart

Steve Lacey’s “Bad Habit” is no. 2 on the Billboard charts thanks to TikTok

Tech: The new iPhone 14 will have a better camera and will be able to detect car crashes

Politics: Liz Truss is the new Prime Minister of the U.K.