#GentleMinions Are Suited Up and Getting Banned on The Viral List 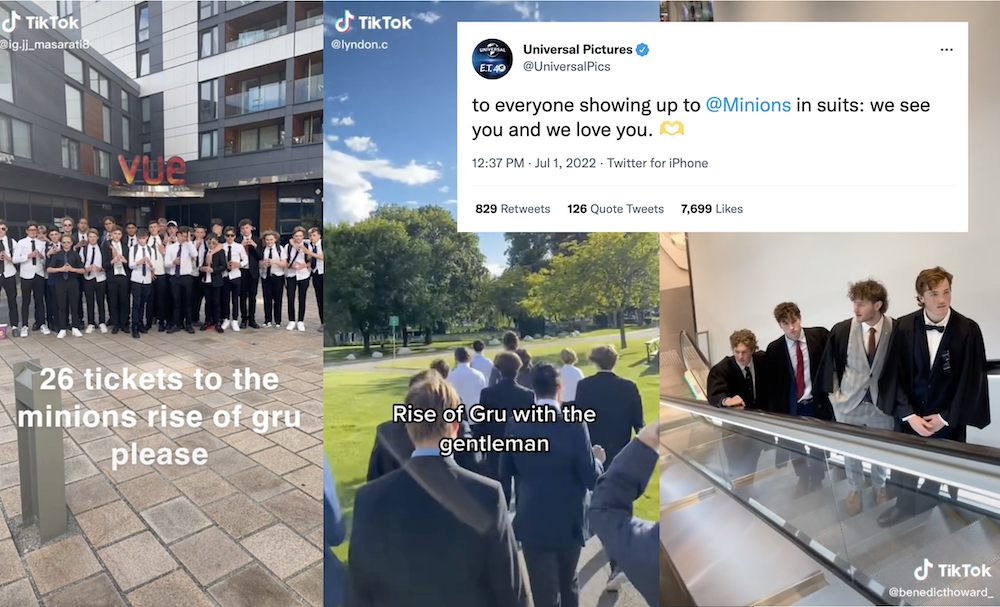 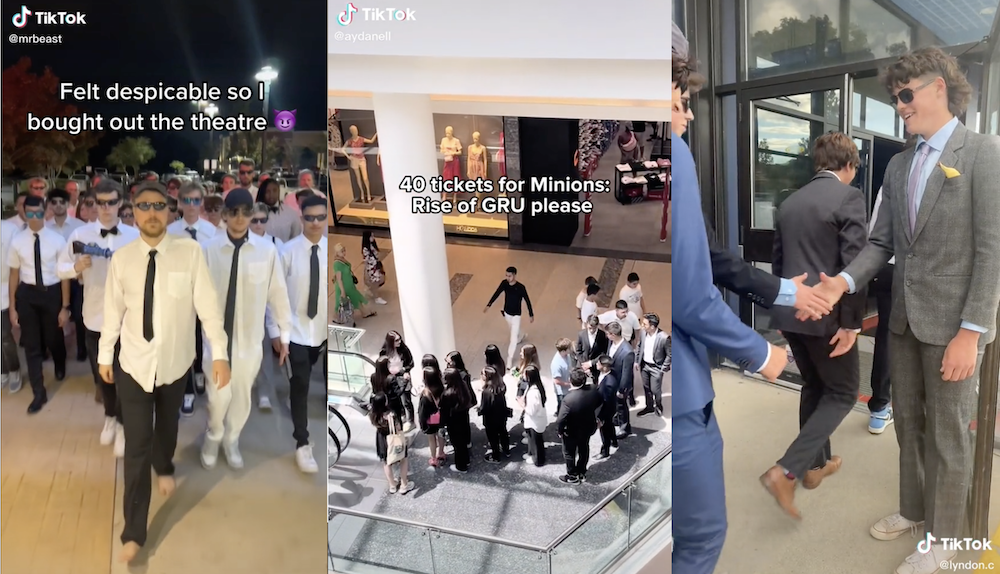 #GentleMinions Are Suiting Up and Showing Up At Theaters En Masse, and Universal Pictures is on Board

Gen Z teens have created a global social media phenomena that’s giving the latest Minions movie a box office boost. Going all-in on ironic fandom, large groups of young moviegoers are gearing up in suits, donning all black shades, and briefcases to theaters to see the new Minions: The Rise of Gru film–and they’re doing it for social media, of course, sharing their adventures on TikTok under the #GentleMinions hashtag. #GentleMinions has over 64 million views as Gen Z takes to their favorite social media app to post videos of themselves lining up outside cinemas in their suits, posing with bananas, and posing with fingers steepled a la Gru. Many of the videos are using the audio “Rich Minion” by Yeat, which samples Minion voices—the top video for the audio is MrBeast’s take on the trend, showing the creator buying out an entire movie theater for suit wearing fans, which has 6.2 million views. Everyone is rushing to explain the trend, but it isn’t too difficult to understand: Gen Z has grown up with the Minions movies, and now they’re sharing an inside joke (albeit with millions of other people worldwide) around the franchise (which many probably have fond memories of), and bringing a meme into the real world (after several years of not being able to see movies at all). YPulse research showed Minions: The Rise of Gru is one of the top ten movies Gen Z was most excited to see this summer and this trend is exponentially adding to the hype. #GentleMinions has boosted box office sales significantly and Universal Pictures tweeted a thank you to their young fans saying, “we see you and we love you.” The light touch is likely the best response, as anything more would be perceived as try-hard. As Slate observed, “The key to a successful meme-based audience booster, it seems, is allowing it to remain an organic phenomenon.” But not everyone loves it. Some of the top watched videos are of rowdy and disruptive teens clapping and cheering throughout the movie, with some getting kicked out and police even being called. Theaters are not happy and some are posting signs claiming that if any groups of #GentleMinions show up in formal attire, they will not be permitted inside. Of course, that has created a new sub-trend of teens wearing suits under their regular clothes and revealing them after they’ve gotten in. 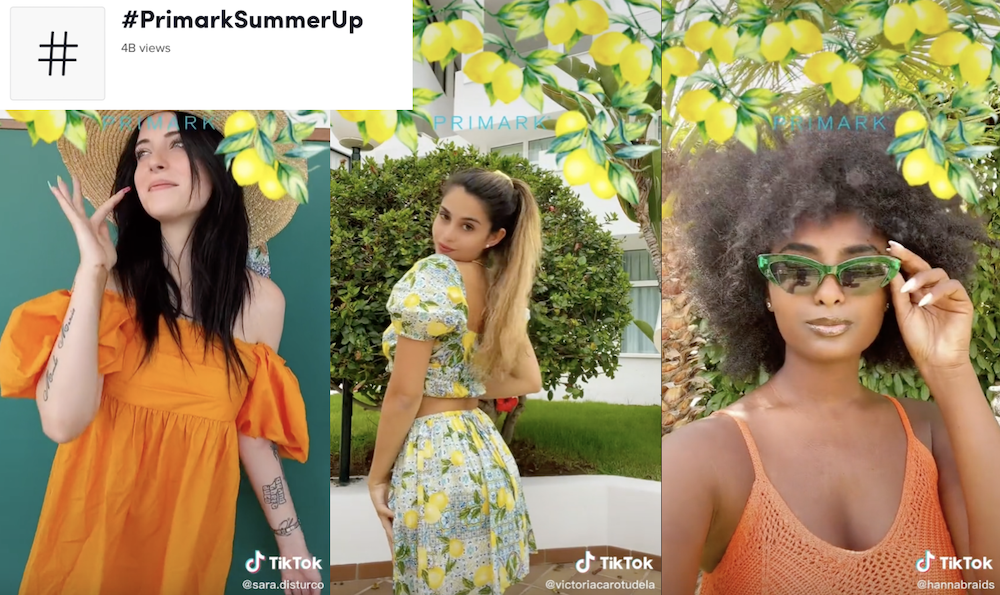 #PrimarkSummerUp is Trending on TikTok

Our recent trend report Mass Merch Mentality looked into the growing big boxification of Western Europe, with Primark one of the leading companies young consumers are turning to. Now the retailer is having a viral moment, as young people are posting about the brand under #PrimarkSummerUp, which currently has 4B views and counting with verified and unverified creators posting their Primark fits. The trend includes them looking frumpy and tired in their normal clothes before transitioning to their Primark fit looking happy and glamorous on holiday, using a branded filter of a lemon tree to celebrate Primark’s new lemon range. Primark’s TikTok page has up to 4M likes and 429K people following to see the latest in-store product they can rush to grab. They’ve even started collabing with popular TikTok influencer @Belss for a get-ready-with-me vid and to show the best London pride outfit–all from Primark of course. The retailer’s embrace of TikTok is impressive considering they’ve been slow to move to ecommerce, with no current online shopping capabilities. Nearly half of young Europeans think that shopping at mass merch stores is cool, and social media is definitely helping this POV, with hashtags like #PrimarkSummerUp helping create demand around affordable clothes and long checkout queues as people rush out to the highstreet. 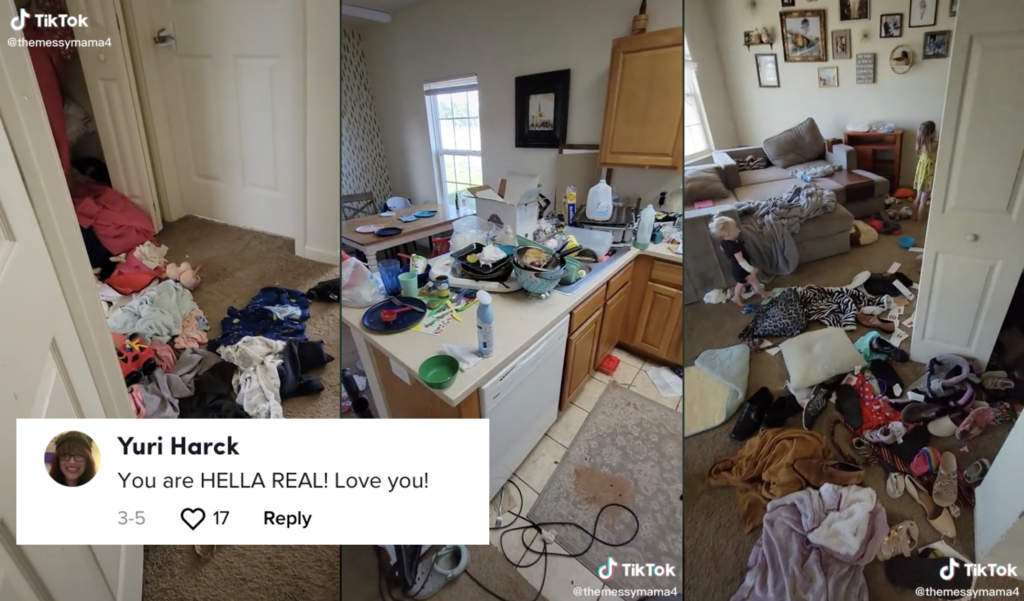 Bri James is a mess–and it’s earning her millions of views. James is a mom of four who posts TikTok content about her life and kids under her account @themessymama4, and her most popular content is all about just how messy her house gets. In her most-viewed video, which has been watched almost 18 million times, James gives a brief tour of her living space, with clothes scattered around, four days of unwashed dishes, and “random stuff” piling up. In her commentary she explains, “I know I’m going to get roasted, I know it, but…this is what happens when two really lazy adults have four kids and don’t pick up after themselves.” According to BuzzFeed, James shares the real footage of her chaotic house (and car) to keep herself accountable, and many of her mess posts include the caption “this is to keep me accountable not for views.” But viewers are watching, and love her honesty and transparency. While there is plenty of judgment in the mix, many comments on her videos are supportive and often thankful, with many commiserating with her experience, like, “Thanks for sharing this- makes me feel normal! Can’t be Pinterest home all the time! Oh well!” Some of James’s most popular content is timelapse videos of her tackling her mess, indicating that fans also find her content oddly satisfying as well. 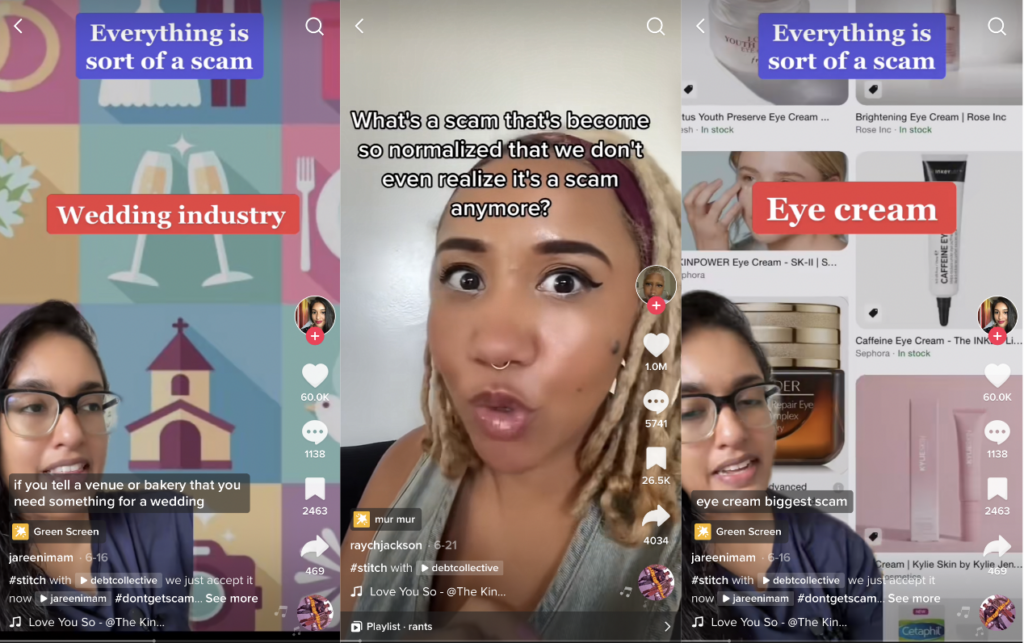 Stranger Things 4 has done it again and given another vintage song a major boost, sending Metallica’s 1986 “Master of Puppets” to No. 1 on the iTunes charts

Thor: Love and Thunder is planning on fully reviving movie theaters this weekend