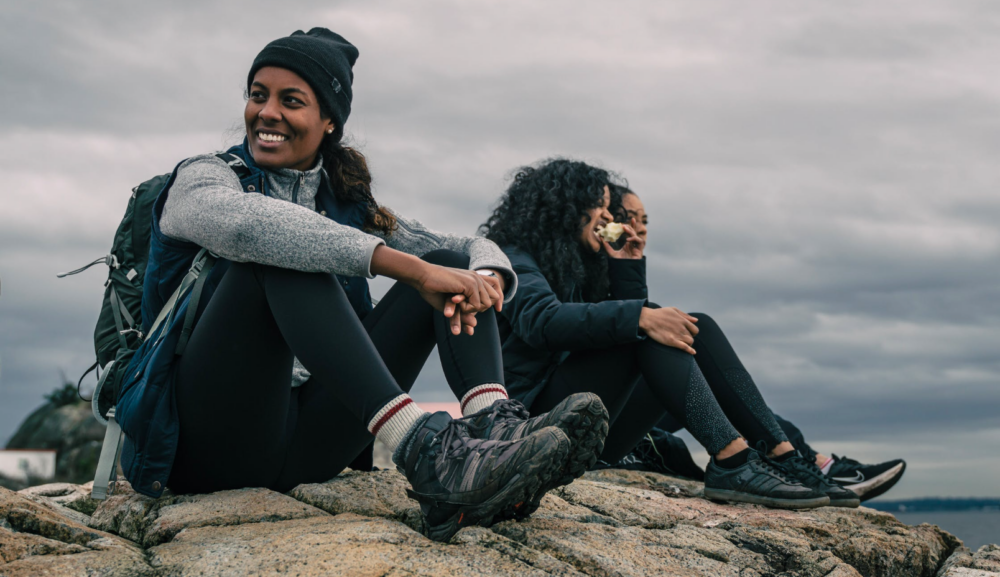 YPulse’s travel and outdoors report found that 87% of BIPOC young consumers say it’s important to spend time outside, while 62% consider themselves “outdoorsy.” But despite the majority of BIPOC young consumers indicating they enjoy being outside, our data also shows that they’re less likely to participate in many outdoors activities, including swimming, hiking, and camping. Of course, outdoor spaces in the U.S. haven’t always been welcoming to this demographic. Up until the Civil Rights Act of 1964, BIPOC communities were either segregated while entering U.S. national parks or sometimes banned from entering altogether, which created “a gap in how different groups of Americans engaged with nature that still has echoes in the present day.” The “nature gap” even dates back as far as the 1800s “when urban White elites began to romanticize nature, viewing it as a wholesome environment.”

But in the last few years—defined by the pandemic and political upheaval—more young people and brands have been addressing this issue. In fact, more than 50 CEOs of outdoor retailers signed a pledge in 2020 to make the outdoors more diverse and inclusive. Now, more brands are finding ways to highlight BIPOC voices, while newly formed organizations are working to make the great outdoors more safe and accessible to these communities across the country. Here are seven groups dedicated to closing the nature gap: 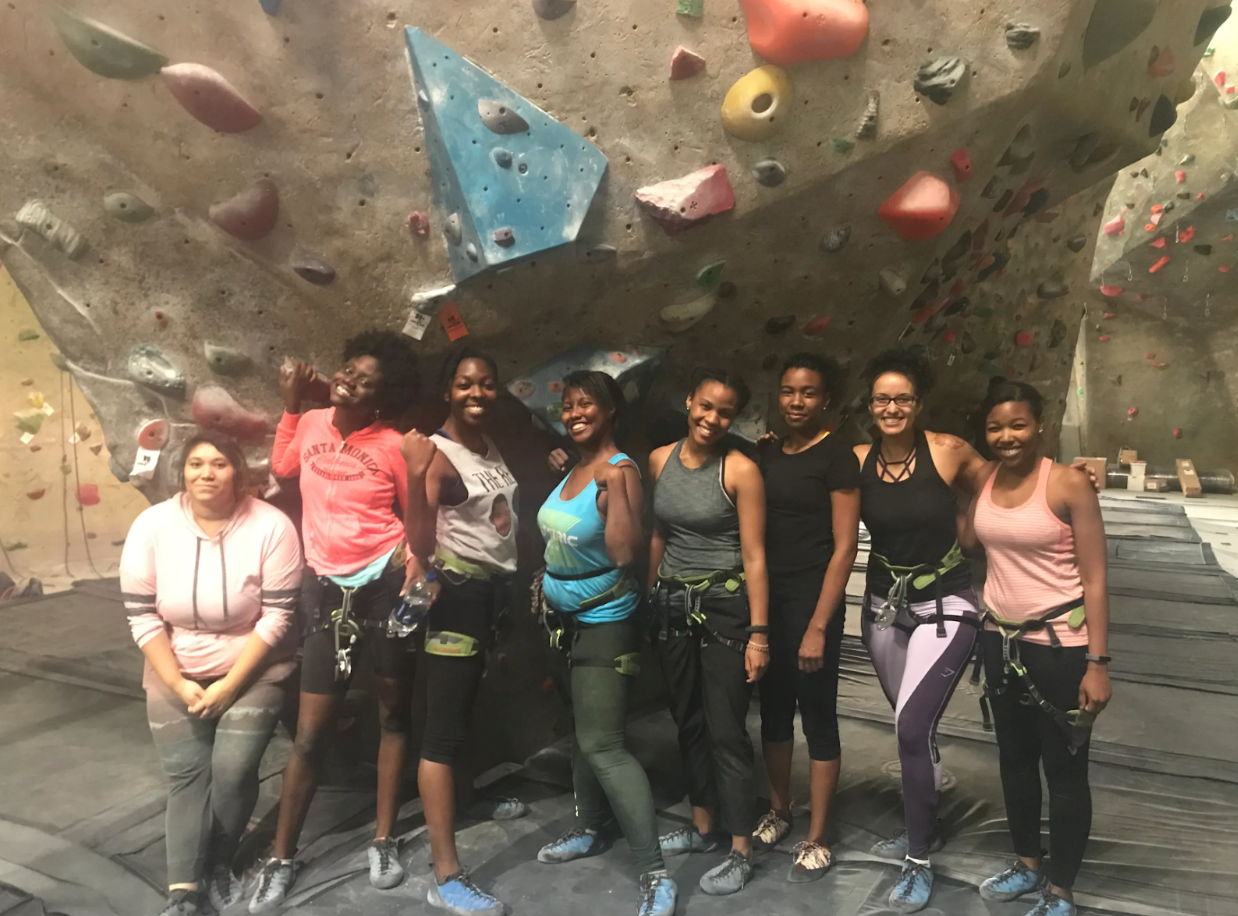 Black Girls Trekkin’
Last year, Nicole Snell and Jasmine Lowe founded Black Girls Trekkin’ as a way to shift the narrative and “promote diversity and inclusion in the outdoors,” and make sure that women of color were getting out in nature and feeling comfortable while doing so. According to their site, while the group was initially created for Black women, they welcome Asian, Latinx, Indigenous, LGBTQ+, Disabled, and other underrepresented groups who “have ever felt left out of the outdoor community.” While the Los Angeles-based organization’s focus is to lead hiking groups in nearby outdoor hiking trails and spaces, they also encourage physical and mental health, finding a community, and healing of trauma. 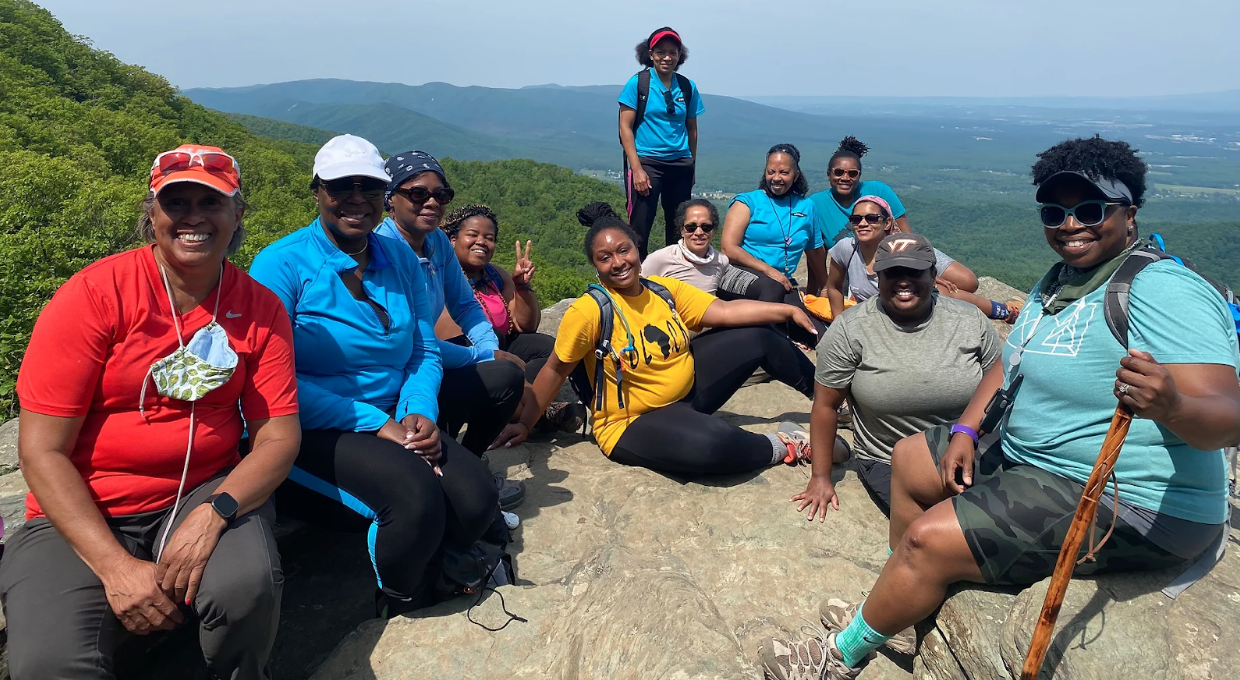 Black Girls Hike RVA
While Black Girls Trekkin’ is working to reach communities in the LA area, another Black women-founded hiking group based in Richmond, Virginia is working to reach their respective communities. Black Girls Hike RVA was founded in 2020 by two friends and educators, Nicole Boyd and Narshara Cade, who wanted to address their city’s lack of diversity on hiking trails. The group hosts hikes twice a month, with around 25 people in attendance, and welcomes all women of color and physical abilities. They also invite non-BIPOC and allies to their trips, though they request that they “honor the group’s exclusive safe space” during hikes. ​YPulse’s travel and outdoors research found that 62% of 13-39-year-old Black consumers consider themselves “outdoorsy,” while 83% agree that spending time outside is rejuvenating—and organizations like Black Girls Trekkin’ and Black Girls Hike RVA are working to create comfortable and safe spaces for BIPOC young consumers who want to spend more time outside. 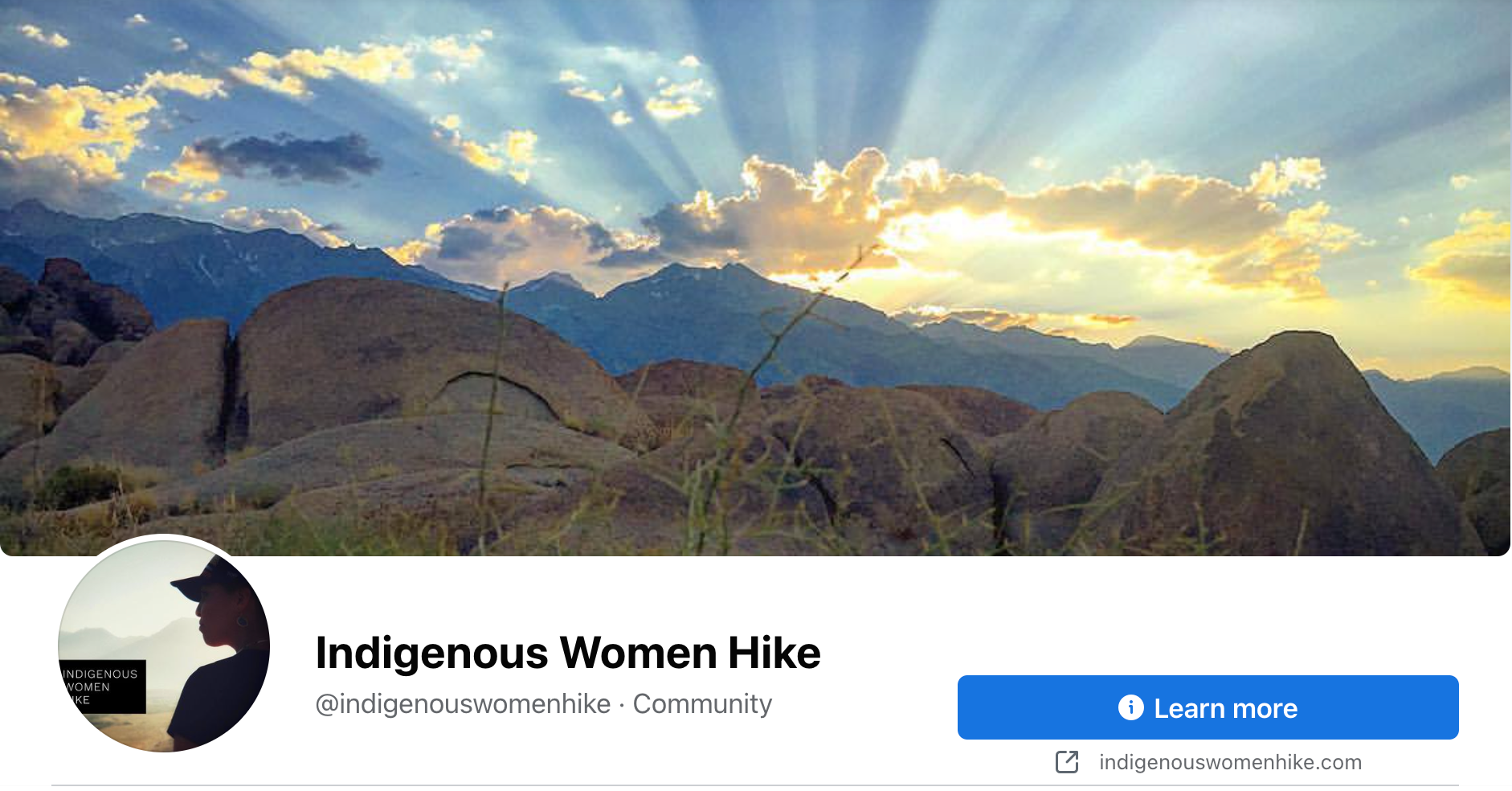 Indigenous Women Hike
Founded by Jolie Varela, the Indigenous Women Hike wants to promote “healing through the inherent connection Indigenous peoples have to the land.” Varela is a hiker, water protector, and land defender—and the group is based out of Owens Valley, California. She initially founded the group in 2018 when her and a group of Indigenous women hiked the 200-mile Nüümü Poyo (John Muir Trail) to “advocate for the history of her people and to acknowledge that these trade routes have been traveled by Indigenous people” since before America was what it was today.  Aside from hiking indigenous lands and sacred sites, Indigenous Women Hike works to “counteract violence to the land,” which Varela was inspired to do after her time protesting and protecting the water in Standing Rock Reservation against the Dakota Access Pipeline.

The North Face’s Explore Fund Council
While The North Face’s Explore Fund has been around for years, it launched the Explore Fund Council in 2020 as a part of its “Reset Normal” campaign. In March of this year, the outdoor apparel and gear brand announced the council’s members, which includes Lena Waithe, climber and director Jimmy Chin, and other diverse individuals from the outdoor community. Along with bringing in “creatives, academic experts, outdoor industry partners, and more” to “collectively develop ideas to help create meaningful change,” the company is pledging $7 million to diversity, equity, and inclusion (DEI) efforts and organizations as a way to build equity in the outdoors.

Intrepid Travel’s Immersive Tours Amplifying BIPOC Experiences
In March, Intrepid Travel announced it was partnering with the National Blacks in Travel & Tourism Collaborative as well as representatives from the Crow Nation and Lakota tribes to curate eight new experiences amplifying BIPOC perspectives and cultures in the U.S. For example, the Charleston to Savannah: Exploring Gullah Geechee Culture allows visitors to learn more about the Gullah Geechee culture, which descended from West and Central African people, while the Tennessee Music Trail to New Orleans trip lets visitors eat Cajun and Creole food at the Deelightful Roux School of Cooking, which is the only African American woman-owned cooking school in New Orleans. The Best of Montana trip lets guests have lunch and hike with the Blackfeet tribe, and the South Dakota to Montana Parks Explorer is a three-hour tour of the Little Bighorn Battlefield National Monument guided by a Crow Nation historian. Immersive experiences that highlight the history of BIPOC communities’ impact to the outdoors can also show BIPOC young travelers that they’re welcome in these outdoor spaces. 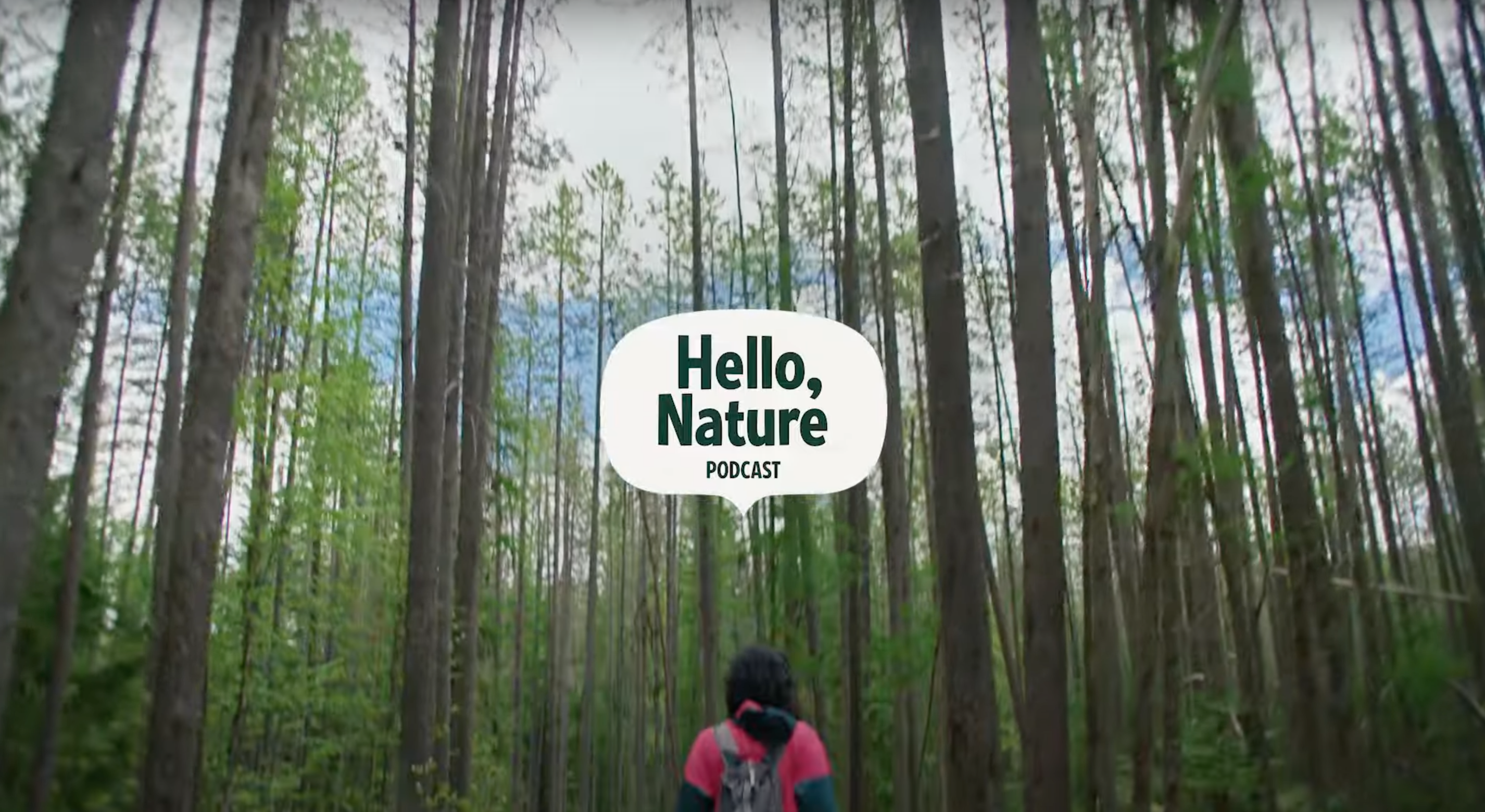 REI Co-op’s “Hello, Nature” Podcast Series
Last fall, REI Co-Op teamed up with Dustlight Productions to launch the “Hello, Nature” podcast series, which shares stories about access to public lands and the work that BIPOC in the parks have done. The podcast, sponsored by Subaru, asked the question: “If the parks are public, aren’t they supposed to be for everyone?” The podcast will feature episodes at the Great Smoky Mountains, Acadia, Yellowstone, and other iconic locations. As host Misha Euceph explains: “Nature for me has been a place of reverence, awe and healing. I want to share that with other people like me. To really make the outdoors accessible to BIPOC folks, we need to center ourselves in the story that’s told about these places. We have always been here, from indigenous people who have lived in these lands long before American colonization and genocide, to enslaved people who first explored Mammoth Cave to AAPI scientists and artists, to present day LGBTQ+ outdoor recreation groups. And we will always be here. It’s finally time our voices tell the story of the national parks, and the story of America.” 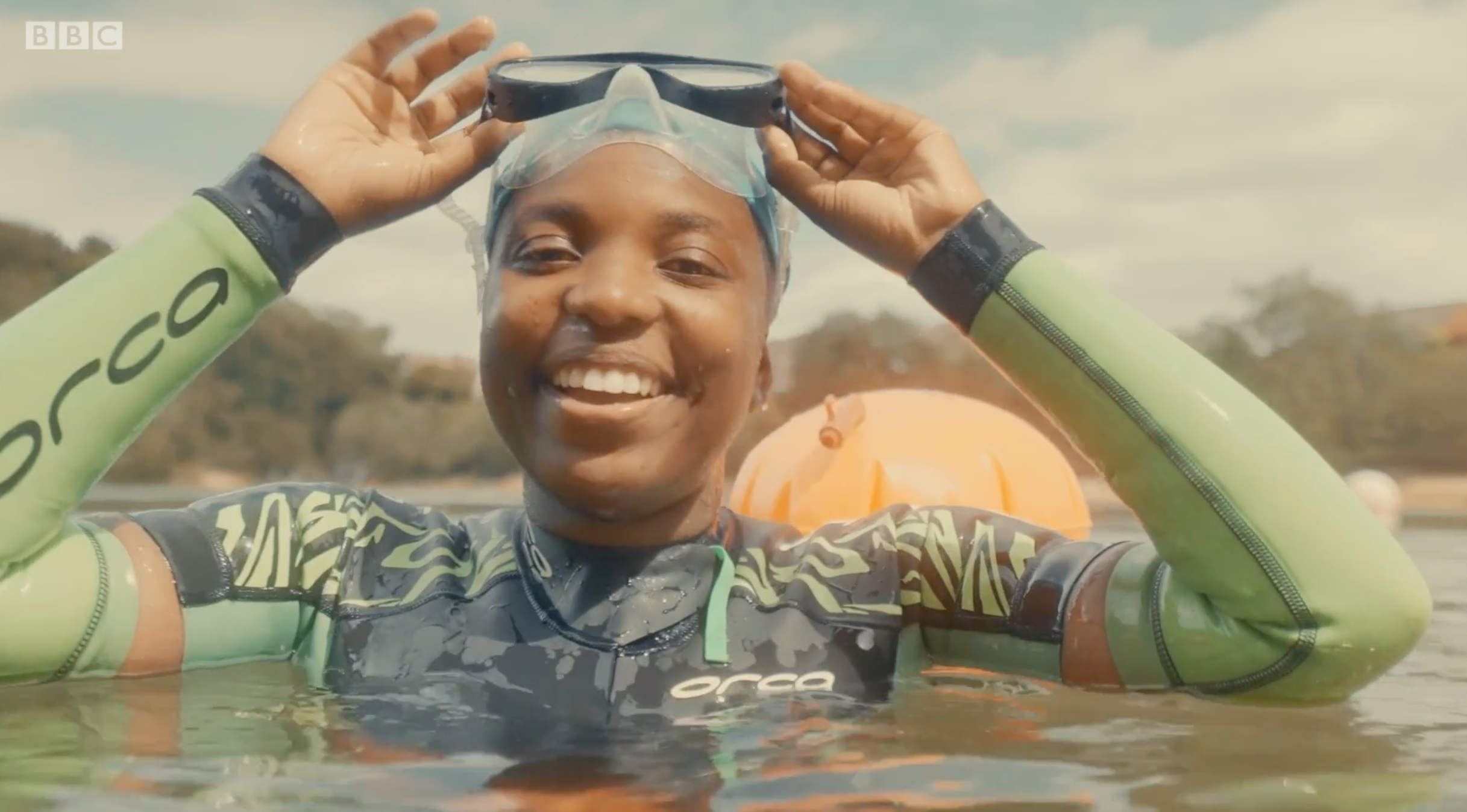 Pi Studios  x BBC’s Outsiders Docuseries
But it’s not just in the U.S. that organizations and groups are trying to make outdoor spaces more accessible for BIPOC communities—work is being done in the U.K. as well. A recent Sport England report found that Black and Asian people in England are less likely to be physically active than White people. Last October, We Are Pi’s Pi Studios produced Outsiders, a three-part docuseries for BBC about three trailblazers who want to make the outdoors a more open, inclusive, and safe environment. It features Amira, who created The Wanderlust Women, a hiking group for Muslin women; Temi, a cyclist who formed the Black Riders Association; and Omie, a wild swimmer who runs outdoor swimming clubs and debunks the myth “Black people can’t swim.” According to Pi Studios’ founder: “Outsiders is much more than a doc series. It is part of a bigger conversation about opening up the outdoors that we’ve been having with community and industry leaders across the UK and Europe since we published our ‘New Society Rules’ research last year. We hope this series encourages more people to enjoy the great British countryside and expands the dialogue about access and inclusion for all.”

North America
Cultural Appropriation Keeps Trending–Here’s What Brands Should Know
Cultural appropriation is an important issue to Gen Z and Millennials, and there ar...
Western Europe
Young Europeans Say These Are Their 15 Favorite American Brands
American culture has infiltrated young Europeans’ lives—and that includes American ...
North America
How Gen Z Students are Protesting for the Causes They Care About
TL;DR: YPulse research shows the majority of Gen Z have taken action to su...