TikTokers are Slapping Each Other with Tortillas on The Viral List 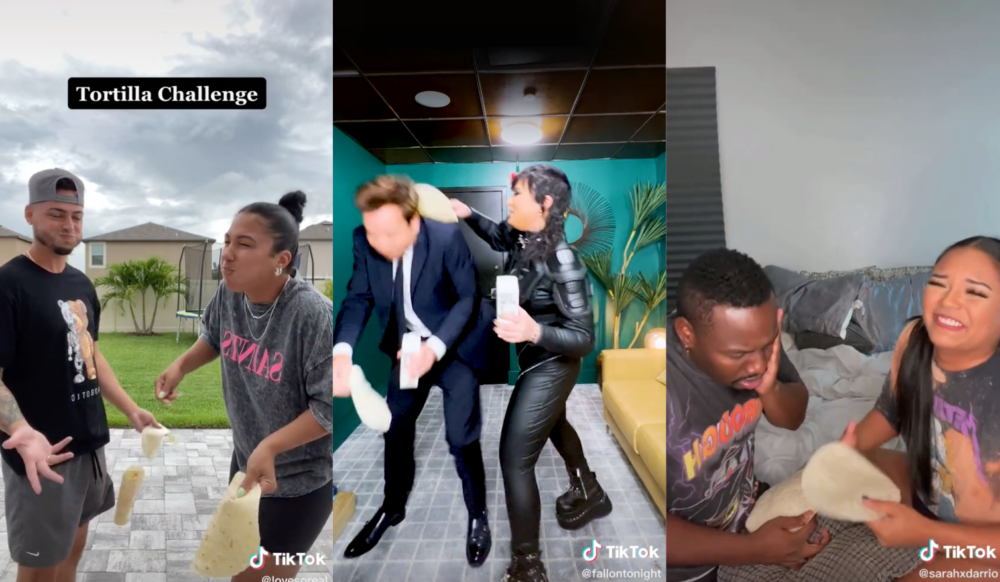 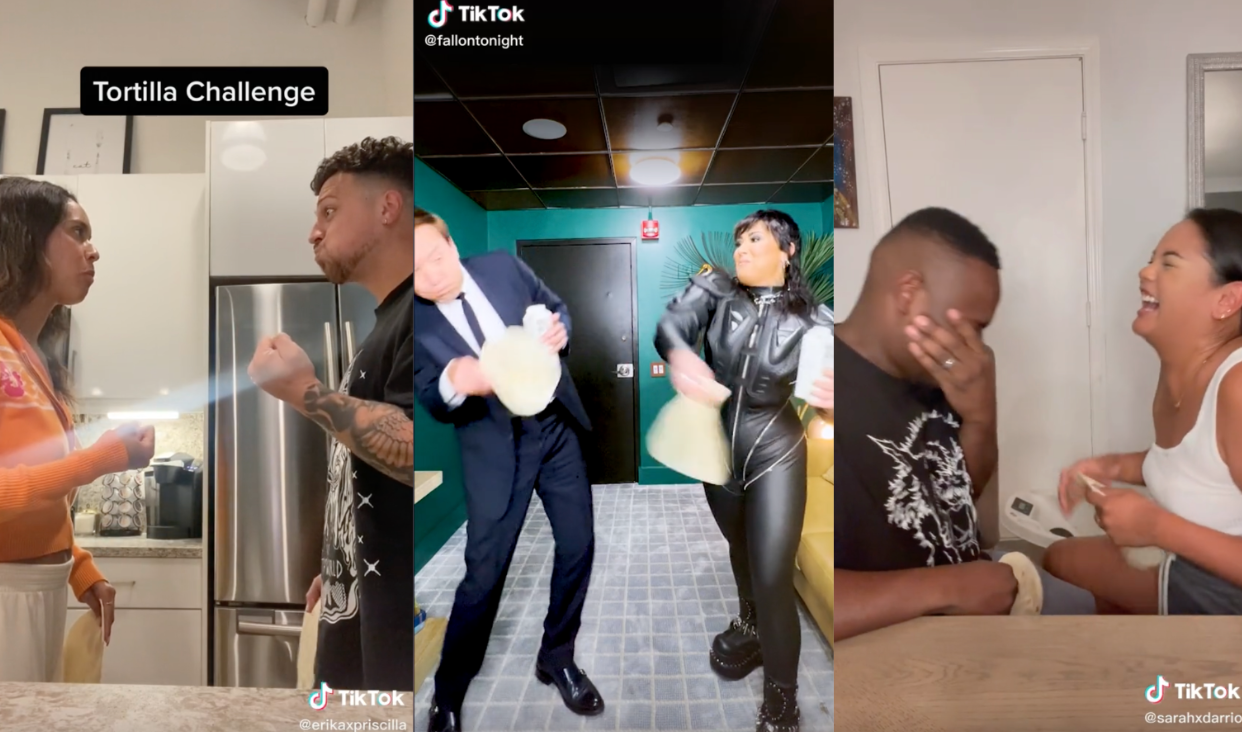 TikTokers are Hitting Each Other With Tortillas
We’ve told you about some strange social media challenges in the past (remember the #MilkCrateChallenge?) but the one currently taking TikTok by storm might be the most bizarre: The #TortillaChallenge has users slapping each other with tortillas (yes, you read that right). It’s quite simple: two people repeatedly slap each other in the face with flour tortillas while holding liquid in their mouths until someone “inevitably spits” out the liquid and is dubbed the “winner.” So far, the #TortillaChallenge hashtag has 182.5 million views—and indeed features a lot of tortilla-slapping. Some users (like content creator Erika Priscilla) have put their own rules on the challenge, with some of them playing Rock, Paper, Scissors to determine who gets to slap who first. The challenge has become so popular that it made it onto The Tonight Show Starring Jimmy Fallon, where Fallon and guest Demi Lovato tortilla-slapped each other silly, with Lovato seeming like the clear winner. That video was shared on TikTok, where it has received 5.2 million views. YPulse told you about the random and surprising social trends captivating Gen Z and Millennials—and social media challenges continue to prove that the simplest things can go viral if they’re unexpected and fun enough to participate in.

Weird, AI-Generated Images Are Taking Over the Internet
Believe it or not, the #TortillaChallenge isn’t the weirdest thing to take over the internet this week. An AI art generator named DALL-E was all users on social media talked about. In case you need an explainer: DALL-E (a play on Disney’s loveable robot WALL-E and Spanish artist Salvador Dalí) is an open-source AI program that creates nine-panel comics based on art descriptions that are inputted by users. Within just a few days, it’s become an internet sensation thanks to its funny, often and very strange, results. Users on Twitter have been sharing their weird image results as they put DALL-E to the test, including images for  “The Demogorgon from Stranger Things holding a basketball,”  “a court sketch of godzilla on trial,”  “Duolingo trail cam” and “Walter White in Animal Crossing.” There are even Reddit and Twitter accounts solely dedicated to sharing the funniest and most bizarre memes. The /weirdalle subreddit has over 50K members, while @weirdalle has over 641.8K followers on Twitter. We’ve told you about how young people are fans of meme generators, and DALL-E is the most recent one keeping them entertained. Brands who want to jump on the trend while it’s still holding their attention might want to ask DALL-E to integrate their products into some unexpected situations. 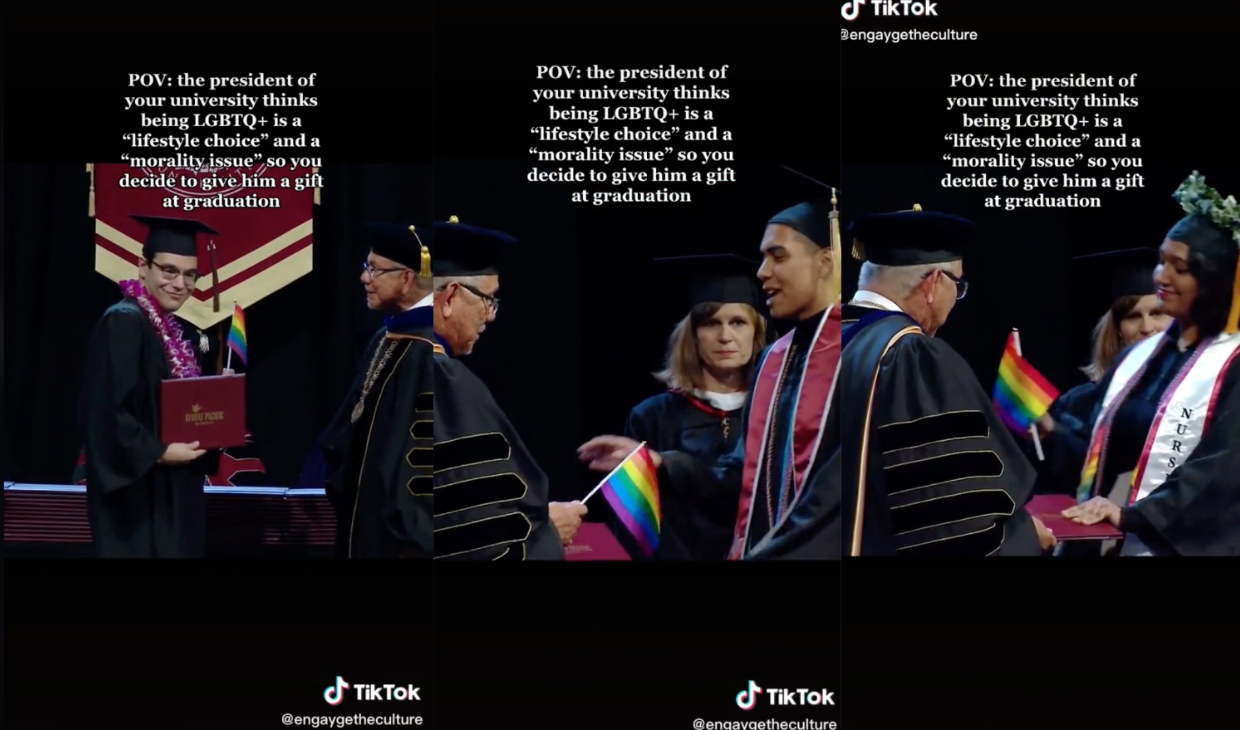 Graduating Seniors from Seattle Pacific University Gave Pride Flags to The School’s President to Protest Anti-LGBTQ Policies
It’s graduation season—and at Seattle Pacific University’s graduation ceremony on Sunday, a group of students from the college’s Associated Students of Seattle Pacific (ASSP) used their graduation moment to protest against the college’s anti-LGBTQ policies. According to its website, SPU is a religious educational institution affiliated with the Free Methodist Church—and students have been working all year to fight back against its Employee Lifestyle Expectations policy, which bans “sexual behavior that is inconsistent with the University’s understanding of Biblical standards.” The student organization’s efforts came to a head during this weekend’s ceremony when around 50 graduating students each handed a Pride flag to the university’s interim president, Pete Menjares, while receiving their diploma. The action was all caught on video, which went viral on TikTok. @engaygetheculture’s video, which received 3 million views, features the caption: “POV: the president of your university thinks being LGBTQ+ is a “lifestyle choice” and a “morality issue” so you decide to give him a graduation gift,” and shows student after student handing a rainbow flag to Menjares as they take their diplomas. Another video on the account shows clips from protests that took place earlier during the school year. Menjares said in an email to NBC News that Sunday “was a wonderful day to celebrate with our graduates. Those who took the time to give me a flag showed me how they felt and I respect their view.” YPulse research found that LGBTQ+ discrimination / rights a one of the top social causes that young people are passionate about—and we told you how they’re leading the way in online activism. 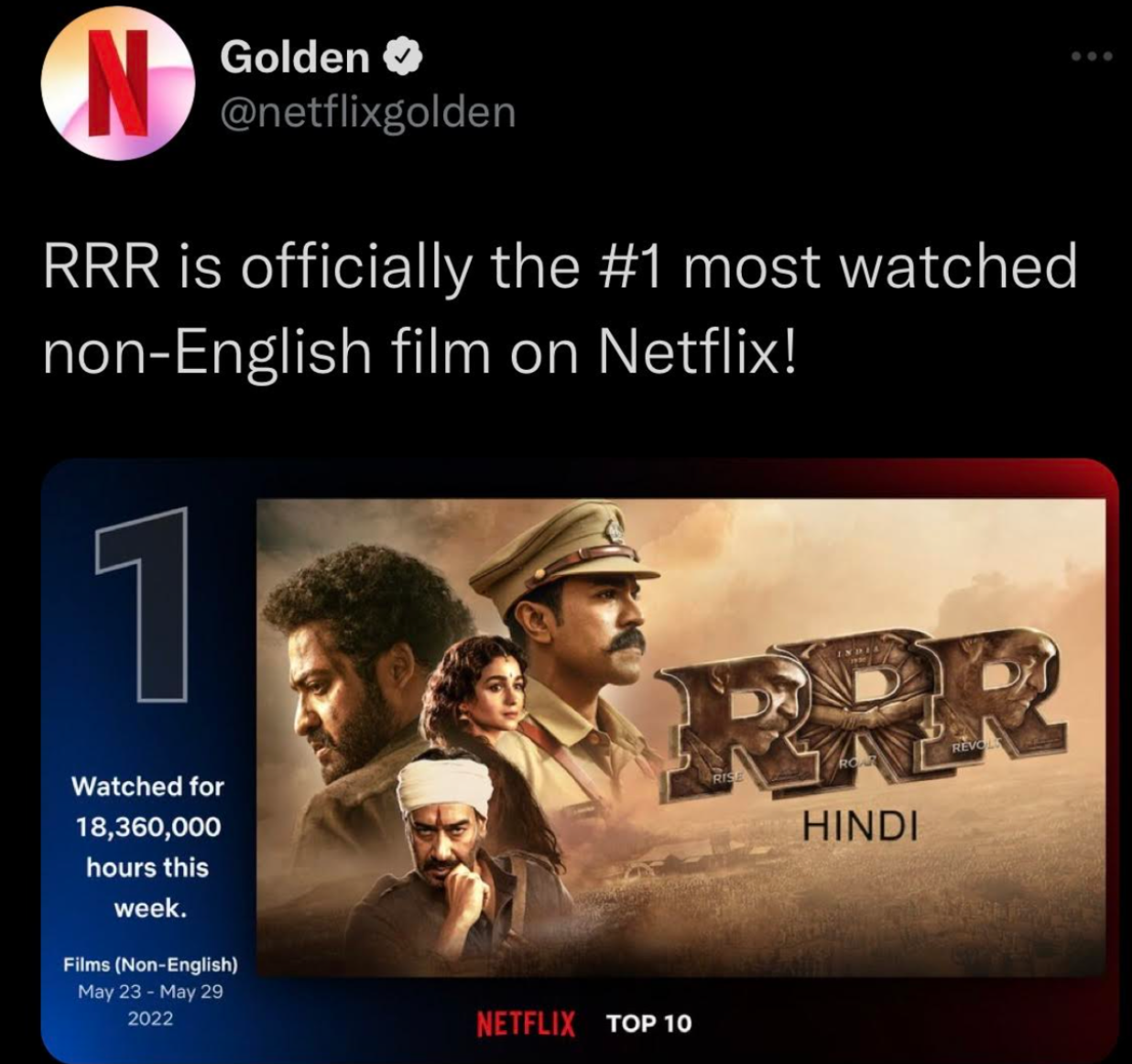 Everyone is Watching This Indian Action Flick on Netflix
In recent years, Netflix has generated a significant amount of hype for international releases, as young consumers embrace content from all over the world. Of course, you already know that K-drama thriller Squid Game became one of the streaming service’s most-watched series quickly making it a global phenomenon. Now, RRR, a 3-hour Indian blockbuster action flick is capturing audiences globally. Directed by S. S. Rajamouli, the Telugu-language film, which is dubbed to Hindi on Netflix, is a fictional tale about two real-life revolutionaries Alluri Sitarama (portrayed by Ram Charan) and Komaram Bheem (portrayed by N.T. Rama Rao Jr.) who come together to fight against British colonialists in the 1920s. It also features a lot of CGI, fighting, “bodies flying through the air,” and explosions. While the movie first premiered in India back in March (including a handful of screenings in North America) and resulted in packed theaters, the movie was made available to stream at the end of May (which was moved up from a scheduled June debut due to “high demand.”) According to Netflix, RRR is the most-watched non-English movie on the streaming platform—and viewers have quickly shared their reactions on social media. @natalietran tweeted “RRR was incredible. Top movie this year so far. Every superhero movie should take note,” while @casparsalmon tweeted “Any stretch of 20 seconds picked at random from RRR contains seventeen times more vitality and pleasure than the entirety of THE BATMAN.” YPulse’s recent Local / Global Citizenship report found that the majority of Gen Z and Millennials like TV shows and movies from other countries, while the majority also say they enjoy learning about other cultures through their entertainment media. 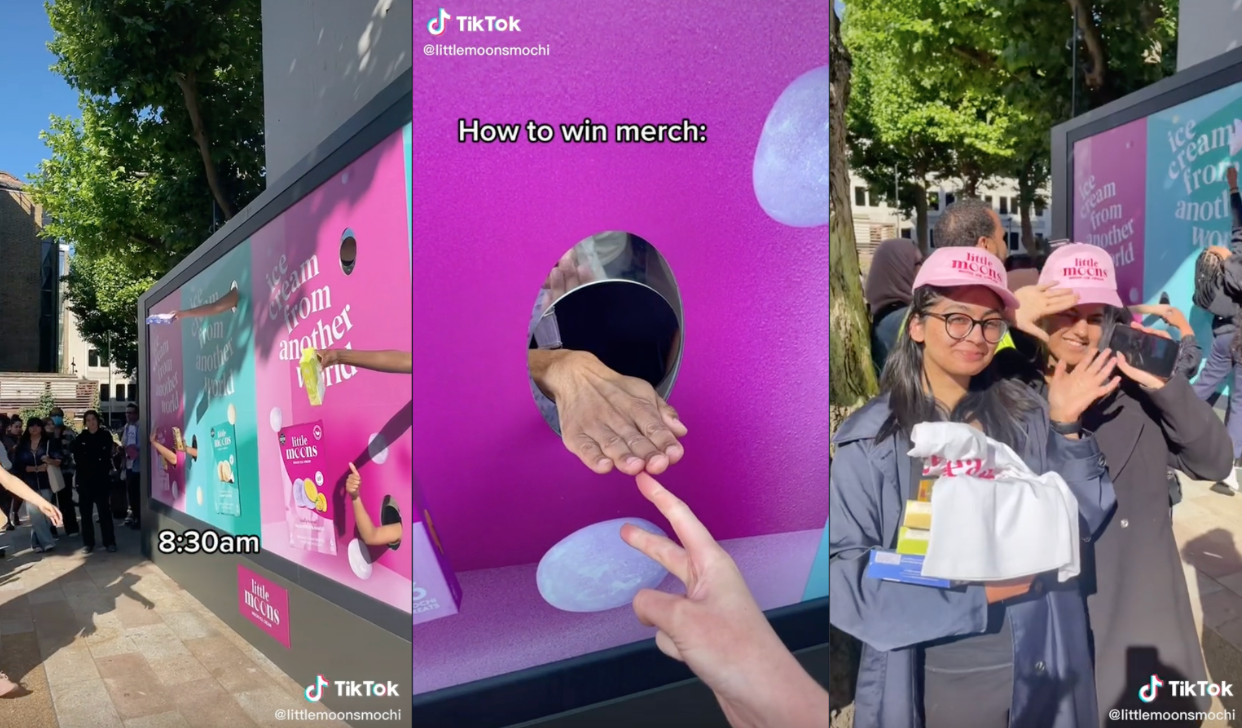 Little Moons Gave Londoners A Chance To Win Merch Through An Interactive Billboard
The brand Little Moons took the U.K. by storm during the pandemic, leaving shelves empty as they went viral on TikTok—many were unable to try the mochi-covered ice cream sensation as sales went up 700% in Tesco alone. They continued to use their platform and presence on @littlemoonsmochi, keeping their popularity alive through social media marketing—and of course new flavors and merchandise. But this week they took to the streets of London with an interactive billboard to offer people free merch—if you won a game of rock-paper-scissors first. Recently we found that young Europeans are after advertisements that are different from what they typically see (and which bores them), and Little Moons has taken this to heart by advertising their product in-person and through interactive games to keep their attention and even to get them out of the house and over to them. The effort was a huge success for the brand with 20,000 people grabbing a sample. But it wasn’t perfect: many were disappointed they didn’t make their way outside of London, and they’re also facing backlash online for ignoring POC that came to the event (which they haven’t addressed yet). 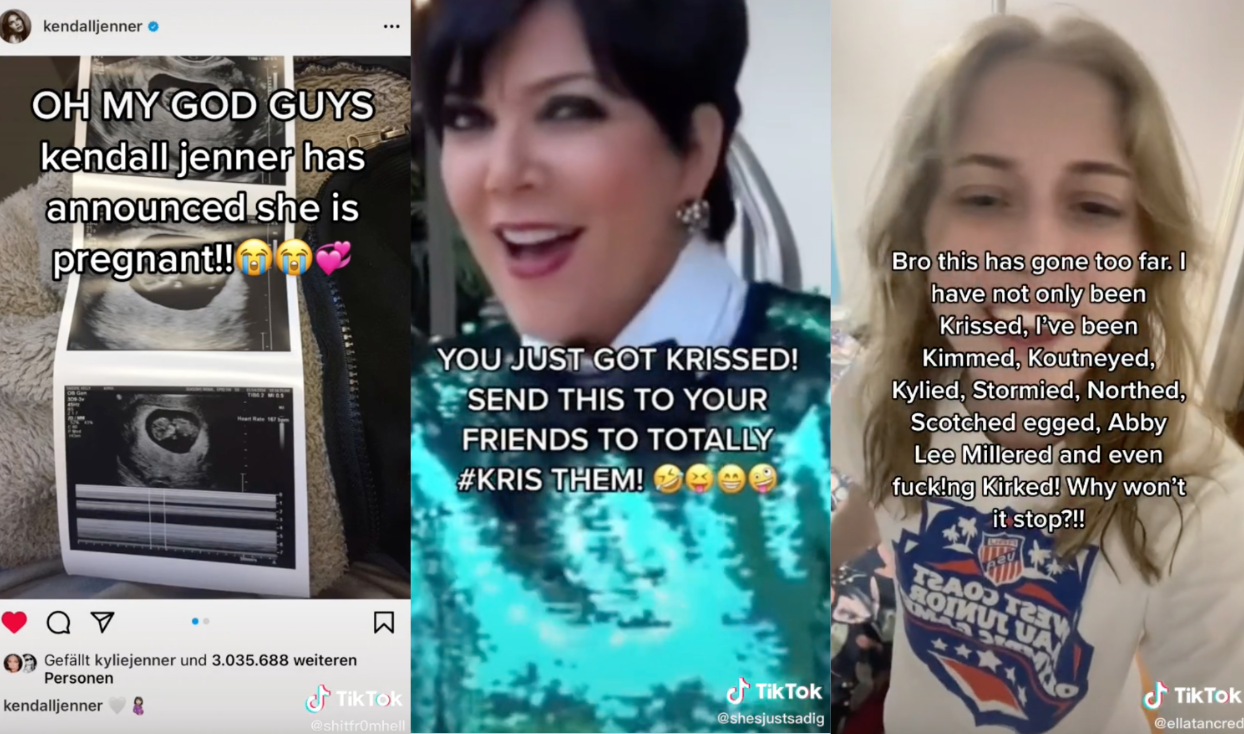 TikTokers are getting pranked (a.k.a #krissed) by an old clip of Kris Jenner dancing to “Lady Marmalade.”

The “internal shower” drink is the latest beverage trend taking over TikTok.

It’s going to be a hairy boy summer.

YouTube Shorts announced that it has reached 1.5 billion users.

Home Depot’s viral giant skeleton is officially back in stock. 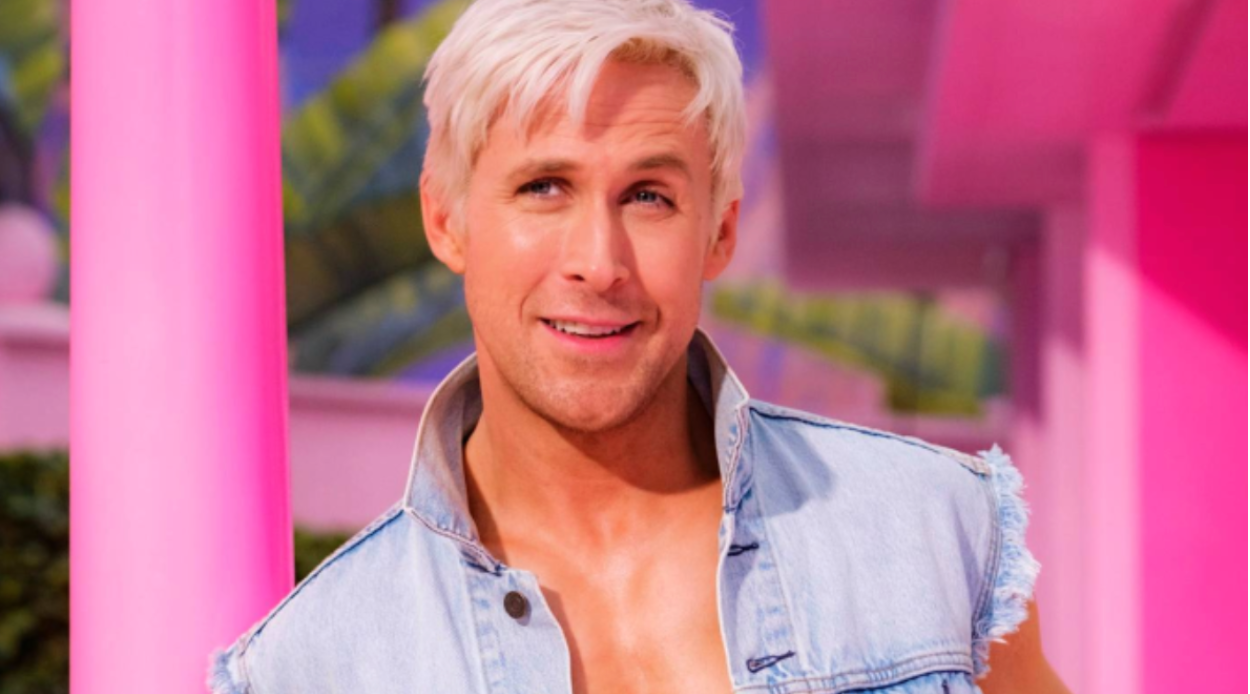 First, we got a glimpse of Margot Robbie as Barbie—now, Warner Bros. unveiled a first look at Ryan Gosling as Ken in all his “beach blonde and spray tan” glory.

Lady Gaga has been cast as Harley Quinn in the Joker sequel—and it’s going to be a musical.

Squid Game officially got the greenlight for a second season. But that’s not all: Netflix is developing a reality competition show where contestants can win $4.56 million.

HBO just announced that another Game of Thrones spinoff is currently in development—this time centered on Kit Harrington’s Jon Snow.

Lizzo changed some of the lyrics in her new song “Grrrls” after she was called out for being ableist.

BTS is going on a hiatus so individual members can pursue solo projects.

Western Europe
4 Brands Tapping TikTok to Reach Young Europeans
Having a TikTok marketing strategy is a must for brands trying to reach young Europ...
North America
We Need An American Girl Doll Who Is on The Viral List
TL;DR Instagram and TikTok are coming up with some wild American Girl doll...
North America
Just How Big Has TikTok Use Gotten Among Gen Z?
No other platform has won Gen Z over as completely as TikTok–and these are the late...