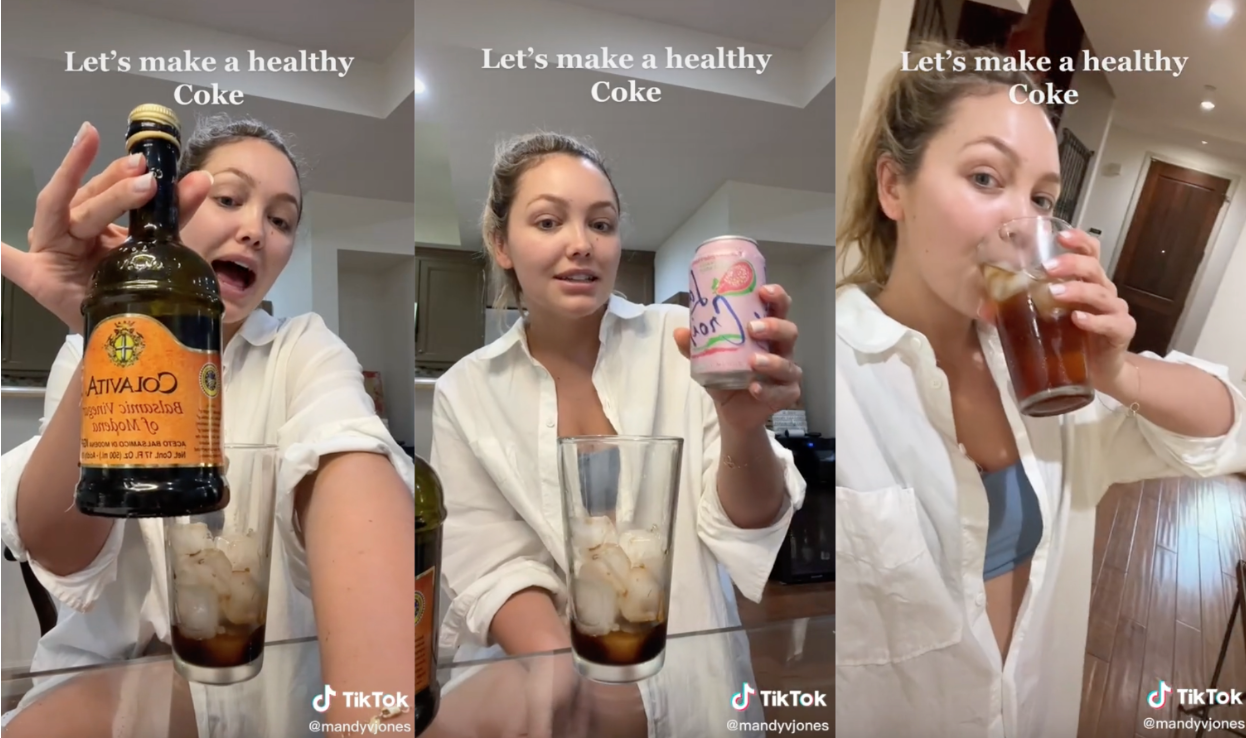 “Healthy Coke” is the Newest Drink Trend Taking Over TikTok (Whether People Like it or Not)
If White Claw was the drink of summer 2019 and White Claw slushies were the drink of COVID—then perhaps that makes “healthy cokes” the drink of summer 2022. On Monday, Amanda Jones (@mandyvjones) shared a video of herself making a “healthy soda alternative.” In the video, which received 5.5 million views, Jones is seen mixing balsamic vinegar with guava-flavored LaCroix seltzer (though she tells her followers they can use any sparkling water of their choice) and dubbing it a “healthy Coke.” Some commenters didn’t seem too sold on the drink, while others began trying it out themselves. So far, the #healthycoke hashtag has 14.1 million views on TikTok with many users sharing their own version of the “healthy Coke” using different brands of balsamic vinegar (one creator used balsamic vinaigrette instead of vinegar) and sparkling water to make theirs. Even Today with Hoda & Jenna hosts Hoda Kotb and Jenna Bush Hager tried the drink on their show, but weren’t too pleased with the results. We’ve told you about previous food and bev concoctions that divided the internet—and it seems as though the “healthy Coke” is joining the ranks, whether people like it or not. For brands, this is just another opportunity to jump on the food and beverage trends that are quickly taking over social media. 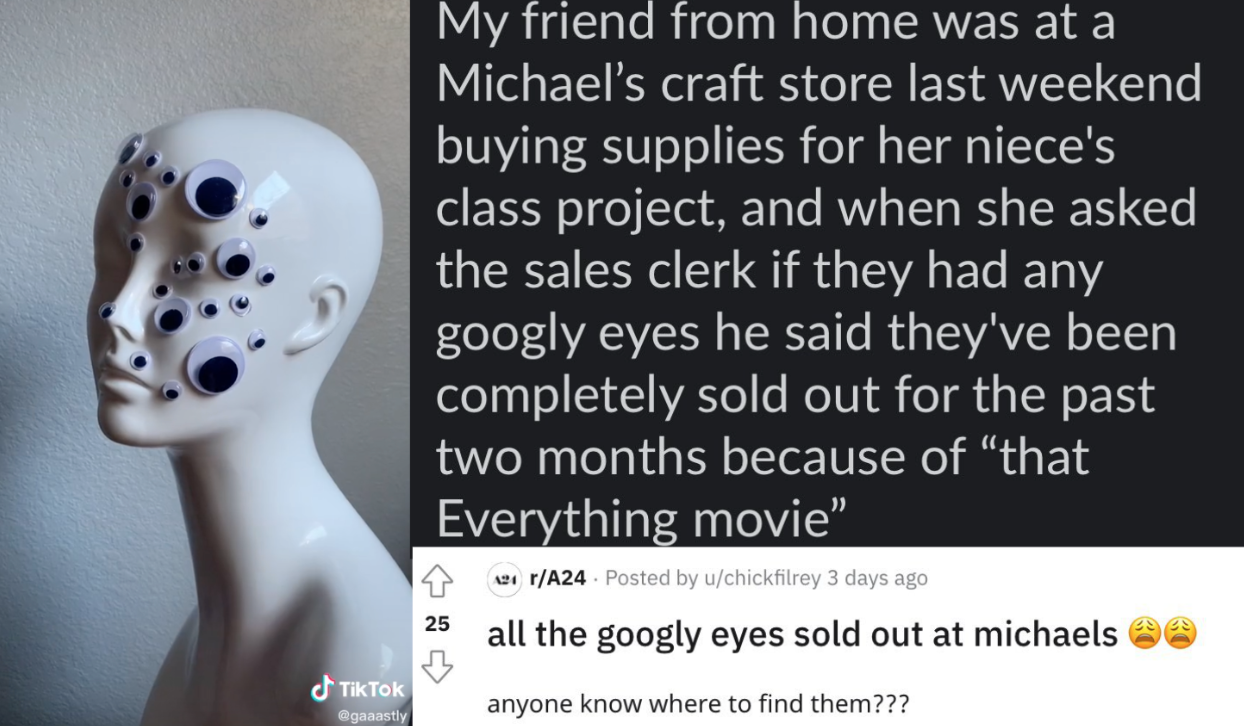 Googly Eyes Are Reportedly Selling Out & Facing a Shortage at Craft Stores, Thanks in Part to Everything Everywhere All At Once
So far, the 2022 box office has been dominated by superhero flicks like The Batman and Doctor Strange in the Multiverse of Madness, and summer blockbusters like Top Gun: Maverick. But A24’s film Everything Everywhere All At Once (which stars Michelle Yeoh and centers on the story of a Chinese immigrant who is suddenly thrust into the multiverse) has become a breakout hit raking in over $50 million at the box office, which is an “impressive milestone” for an indie arthouse film—and making it the studio’s biggest release to date. Googly eyes are a recurring prop seen throughout—and because of the movie’s popularity, the items are reportedly selling out and seeing a shortage across craft stores in the U.S., according to Slate. Last month, A24 reshared screenshots on its official Twitter account alleging that the googly eye supply at craft store Michaels was entirely gone, with one blaming “that Everything movie.” One follower even commented on the post: “THEY’RE SOLD OUT EVERYWHERE. I NEED THEM IN MY LIFE.” A24 was selling branded googly eyes on its official shop following the movie’s premiere, but sold out shortly after (though it has been restocked since). According to Slate’s reporters, some Michaels locations in Brooklyn were “running low” on “wiggle eyes,” while some locations in Connecticut still saw at least a “half-full display.” However, one of Michaels managers told Slate in an email that there is “no correlation between googly eye supply and the film’s release—but while there is no definitive data on whether is Everything Everywhere All At Once is the entire reason for the shortage, there’s no denying that it has at least played some part in it. On TikTok, the hashtag #everythingeverywhereallatonce has 185.7 million views and while much of the videos feature users praising the film, many users are also showing off how they’re using googly eyes—including one (which garnered over 50K views) from @gaaastly showing off their googly eyes to recreate costume pieces from the film. YPulse has told you about how the popularity of some movies and TV shows has led to a surge of certain products to be in demand—and this is just another small example of that. 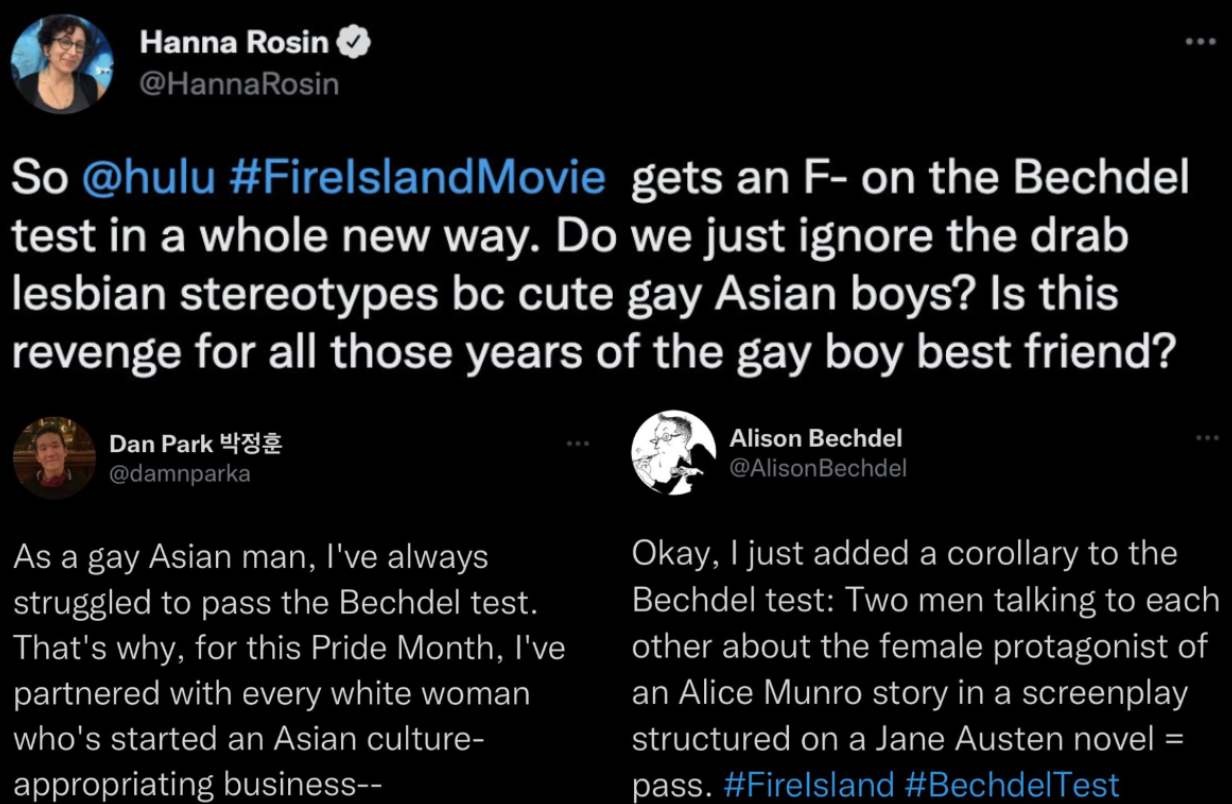 A Writer is Receiving Backlash After Claiming That Hulu’s Queer Asian Romcom Fire Island Doesn’t Pass the Bechdel Test
Last Friday, Hulu premiered its romcom Fire Island, a gay modern retelling of Jane Austen’s Pride and Prejudice starring SNL’s Bowen Yang, Joel Kim Booster, and Margaret Cho. the movie centers on a group of queer friends who travel to New York’s Fire Island on a summer getaway. (The beach itself is known for being a haven for LGBTQ+ communities.) But one writer seemed to take issue with the movie. On Monday, writer Helen Rosin wrote in a now-deleted tweet: “FireIslandMovie gets an F- on the Bechdel test in a whole new way. Do we just ignore the drab lesbian stereotypes bc cute gay Asian boys? Is this revenge for all those years of the gay boy best friend?” However, she was met with swift backlash. As a refresher: The Bechdel Test measures whether a work features at least two women who talk to each other about something other than a man. Users pointed out that Rosin shouldn’t be using a measure of female representation in a movie that focuses on relationships between queen men. Jenn Fang, who owns Reappropriate blog which focuses on Asian American and feminist issues, tweeted: “Can we not do this, please? This movie features several queer Asian men — who are vastly underrepresented in media and shown only as flat, stereotypical, supporting characters when sporadically present — as complex and nuanced leads.” She added: “I know this is trying to be a feminist take, but what it actually ends up doing is pitting (second wave) feminism against marginalized AsAms. It’s ok for a film about queer AsAm men to actually just be about queer AsAm men.” Many others shared Fang’s sentiments and of course, others created memes to troll Rosin’s statements. Even Alison Bechdel (who created the Bechdel test) chimed in on the discourse and disagreed with Rosin, tweeting: “Okay, I just added a corollary to the Bechdel test: Two men talking to each other about the female protagonist of an Alice Munro story in a screenplay structured on a Jane Austen novel = pass. #FireIsland #BechdelTest” Shortly after, Rosin deleted her original tweet and put out an apologizing, and writing that “The movie was telling a story about queer AAPI men, whose experiences don’t show up enough in movies or anywhere else.” For brands (and yes, even influencers and creators), this is a good reminder that if you have a thought you want to share, it’s important that it isn’t erasing other marginalized communities in the process. 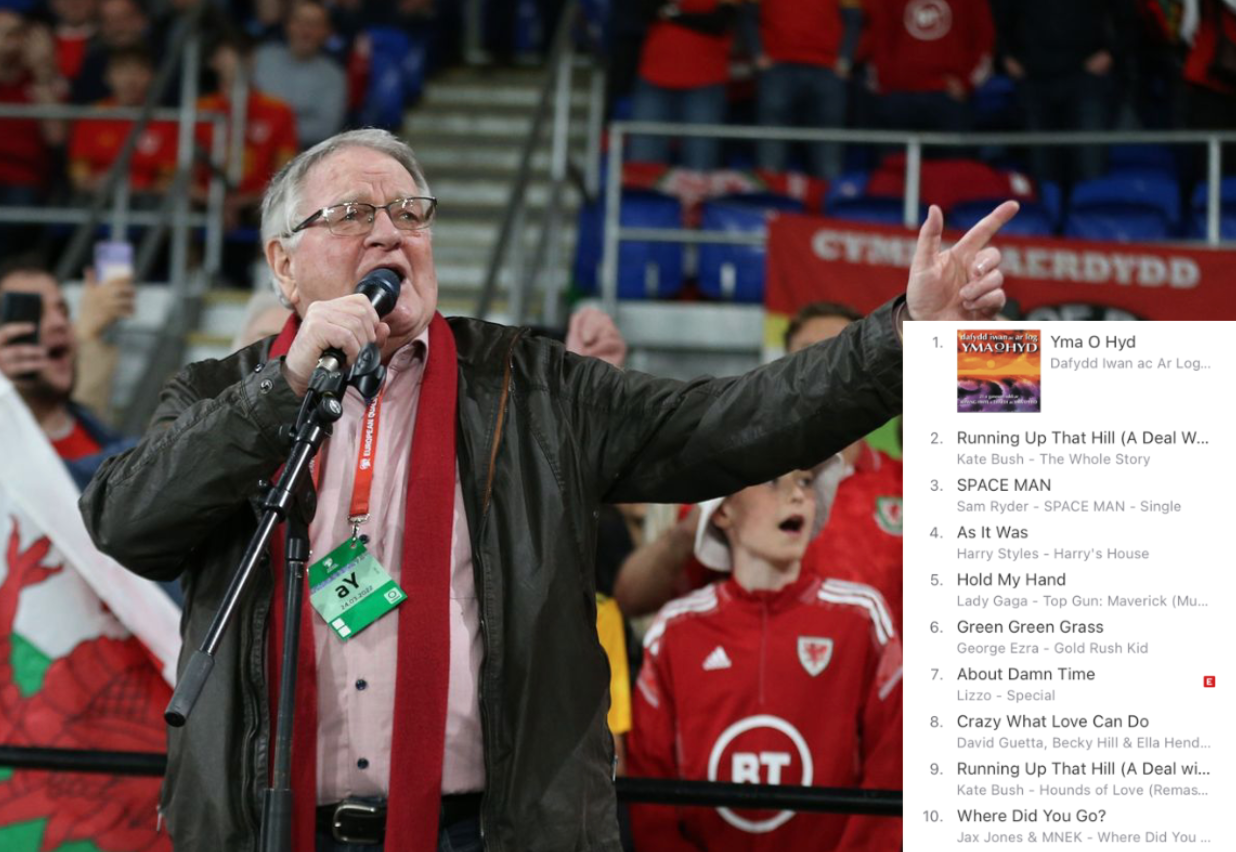 Welsh Folk Anthem Yma o Hyd Hits No.1 Spot on iTunes Chart
Dafydd Iwan has replaced Kate Bushes “Running Up The Hill” at the top of the iTunes chart following the revival of the song from the Netflix show Stranger Things. Now the Welsh folk song Yma o Hyd has taken the top place and it’s thanks to football. We’ve already seen that young Europeans are bigger sports fans than their North American counterparts, their love for football holds a special place in their hearts as their favorite sport – and not just by a little. And it continues even when the Premier League season finishes as we brace ourselves for the long-awaited World Cup. It’s because of football that this anthem has become number one. As Wales beat Ukraine last Sunday 1-0, they’ve qualified for the World Cup for the first time in 64 years – and with it brings much celebration, patriotism, and the rise in the Welsh song as it becomes a football anthem for Welsh and non-Welsh speakers. They’ve taken their celebrations to Twitter too by expressing their joy for the success of their team and how proud they are of their nationality and language that’s represented in the song. @ffwtbol on Twitter is just one example of the growing patriotism amongst young Welsh consumers, and it seems many agree in the tread too as the song gains more publicity. Young consumers’ interest in music not from their own country is on the rise and as songs like Iwan’s hit the charts the globalization of music amongst young people becomes even more apparent. And as music becomes the main passtime for young consumers, more football songs are bound to hit the charts as the World Cup begins. But for now young consumers can have a listen to Yma o Hyd here or on any streaming service.

Links We’re Passing
Lil Nas X is speaking out against BET for shutting him out of the BET Awards nominations, claiming the network is homophobic.

Burger King Austria is being accused of pride-washing with their “Equal Buns” campaign.

Postmates debuted a “bottom-friendly menu” in honor of Pride Month.

Summer Game Fest has taken off on Twitter giving gamers a taste of what to look forward to in the future.

Unsurprisingly, the internet is thirsting over Chris Evans (again), but this time over his Boston accent, new mustache, and colorful shirt.

Marvel and Euphoria were among some of the biggest winners at the 2022 MTV Movie Awards.

Amazon released a first look at The Policeman starring The Crown’s Emma Corrin and Harry Styles.