Are Young Europeans Into the Mystical and Magical? 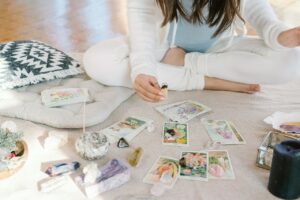 From tarot to crystals to astrology, young Europeans are turning to the supernatural for spirituality—and for fun…

YPulse has been tracking Gen Z and Millennials’ move away from traditional religion for a while as they increasingly identify as spiritual rather than religious. In Western Europe, a similar shift has been taking place among young people, who are largely rejecting organized religion in favor of spirituality (or neither). Now, the majority say they’ve found meaning outside of traditional religion, and more than half agree, “My passions in life have replaced religion for me,” indicating how much religion has changed for these gens.

At the same time, young consumers have grown increasingly interested in supernatural, mystical, and magical products and pastimes. Even before the pandemic, interest in this area was growing among young consumers. But the pandemic led to a “revival of the occult” across Western Europe as young people turned to astrology, tarot, and other mystical practices to help them cope with the uncertainty of life in COVID times—as well as provide them some new self-care tools and help them fill their idle time. Now, our WE Religion and Spirituality report finds that 50% of young Europeans say mystical healing / supernatural practices are becoming mainstream. Here are four stats that show how that’s taking shape in Western Europe: 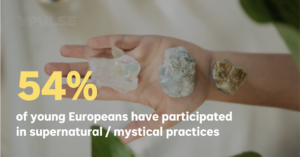 The majority of young Europeans have tried some supernatural practice.

Proving just how mainstream the occult has become, more than half of Gen Z and Millennials in Western Europe have participated in some kind of supernatural practice, with horoscopes, astrology, and essential oils being the most popular practices they’ve taken part in. Millennials and females are the most likely to say they’ve tapped into the supernatural, but 50% of males have, too. Meanwhile, French consumers are using these practices the most, with a full 64% saying they’ve participated in at least one. Unsurprisingly, social media is a large driver of this trend—and TikTok in particular. #SpiritualTok and #WitchTok have gone mainstream during the pandemic, garnering billions of views as creators post horoscopes, tarot readings, and educational videos about supernatural and spiritual practices. Now, the occult has its own influencers, giving young consumers even more inspiration to join in—and providing brands an easy way to reach them. 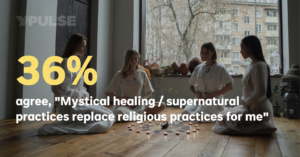 More than a third say the supernatural has replaced traditional religious practices for them.

While for many, mystical practices are just for fun, it is becoming a religious stand-in. Yes, the majority disagree that the supernatural has replaced traditional religious practices for them. But it’s not insignificant that 36% say that it has, giving some traction to such headlines as “How millennials replaced religion with astrology,” “White Witches, Tarot, Death Cults Are The New Religion,” and “Is Astrology Religion for Those of Us With No Religion?” But rather than proving that tarot is now a religion, though, this shows that while religion is more fluid for Gen Z and Millennials, they still want some spiritual guidance. After all, while half say organized religion is a thing of the past, 67% agree, “I’m looking for something that will help me to live a better life”—and for many, mystical practices may be just that. 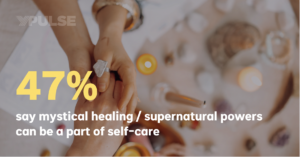 Nearly half say mystical practices can be part of self-care.

Whether they think of these practices as religious or not, nearly half of young Europeans say they can serve as part of their self-care routine, which Gen Z and Millennials have been taking even more seriously since the start of the pandemic. In our WE mental health report, young Europeans said their mental health is the biggest thing that has been negatively impacted by COVID, leading them to double down on their efforts to keep calm and carry on. In fact, “focus on my mental / physical health” was the top thing they started to do during the pandemic that they want to continue doing. And when we asked what they’ve done to combat stress in the past year, their top answers were: made a playlist, tried a new exercise routine, started a beauty / self-care activity, took a mental health day, and tried a new diet. Mindfulness and meditation apps have also continued to boom in popularity, as have other calming content, such as podcasts, TV shows, and more. But for many, tarot, astrology, crystals, and the like have become central to their self-care routines, too, leading many brands to create their own products and campaigns aimed at young Europeans’ growing participation in the mystical realm. And Gen Z and Millennials want to see more of this… 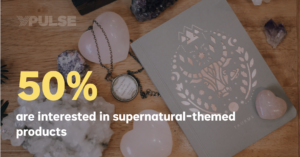 Half are interested in products focused on mystical healing.

​​All of the increased interest in the occult has led to a boom in the sales of related products and offerings: Dazed Digital, for instance, saw a 22% increase in horoscope-related traffic compared in 2020 compared to the year before, while Bloomberg reported that the market for gems and healing crystals were outpacing the diamond market. Meanwhile, astrology apps such as Co-star reported 7.5 million registered users and reports they’ve been downloaded by 15% of 20-to-24-year-old women. And independent tarot readers, mystics, and psychics have racked up thousands and millions of views and followers on social platforms like TikTok, OnlyFans and YouTube—and have successfully partnered with brands to create sponsored merch lines to better reach their audiences. And this is exactly what young Europeans want to see: 50% say they’re interested in supernatural-themed products. And while for some these products may serve as religious objects, 49% also say that supernatural-themed products are fun even if they don’t work, indicating that brands can get involved in this space purely to provide entertainment.

Western Europe
These Are Young Europeans’ Top 15 Hobbies Right Now
Hobbies are a source of community for Gen Z and Millennials. Here are the ones they...
North America
Young People Are Saying Goodbye to the iPod on The Viral List
TL;DR: RIP, iPod—Apple is going to discontinue making the devices after ne...
Western Europe
Young Europeans Are Using TikTok More Than Ever
TikTok became an entertainment staple among young Europeans during the pandemic, an...