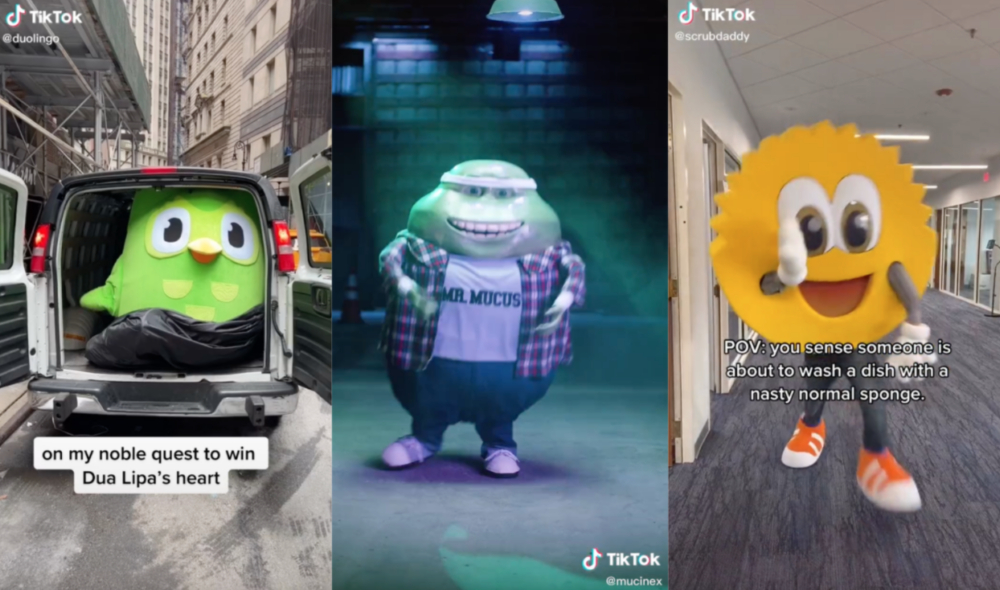 To reach young consumers, these four brands turned their mascots into TikTok stars…

We told you that Gen Z is more likely to be on TikTok than Millennials, and YPulse’s social and mobile marketing report found that nearly half of  13-20-year-olds are open to seeing advertising on TikTok, while the majority of Gen Z who use social media say they don’t mind ads on social media as long as they’re entertaining. Brands have been tapping everyone from popular celebrities and influencers, to college athletes, their own employees, and even virtual influencers to market products to reach Gen Z users–and now some have turned their mascots into influencers and viral stars on the app. 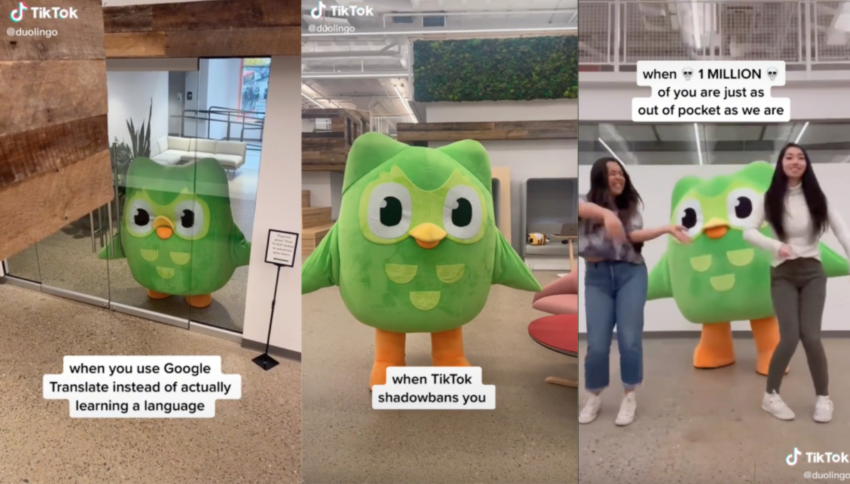 Duolingo’s Duo the Owl
Thanks to “unhinged content,” social listening, and a trusty mascot, Duolingo’s TikTok strategy is helping humanize the brand. Counting 3.3 million followers on TikTok, Duo the Owl is the star of Duolingo’s account, which plays on the trends circulating the app while sassing anyone who forgets their lesson of the day. The language learning platform first joined TikTok in February 2021, but it wasn’t until Duo the Owl came onto the scene in October that the brand’s content took off. Duolingo’s “How did you hear about us survey” experienced a surge in responses from new users saying they discovered the app via TikTok. The brand has partnered with influencers and celebrities including Dua Lipa (people often confuse Duolingo for the pop singer) and Rod Thill to create relevant content that speaks to young consumers. Zaria Parvez, one of the brains behind Duolingo’s TikTok, notes the brand’s ability to lean into “unhinged content,” leverage viral trends, interact with other TikTokers in the comments, and poke fun at Duolingo by recreating memes about the platform has helped the brand entertain its audience. Which is exactly the point of TikTok—users want to be entertained, not marketed to in a way that feels obvious and tryhard-y. YPulse’s Pop Culture Redefined trend research shows 62% of young consumers say brands should comment on viral pop culture events / trends to stay relevant with their generation. 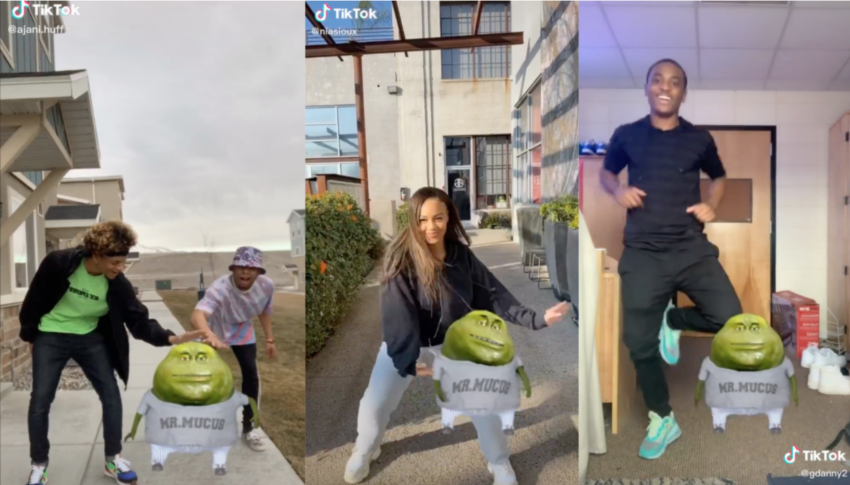 Mucinex’s Mr. Mucus
To promote its new Mucinex Nightshift over-the-counter medicine that debuted last February, Mucinex launched a dance-off competition on TikTok. The brand tapped So You Think Can Dance couple Stephen “tWitch” Boss and Allison Holker, who choreographed the “zombie dance” with the brand’s mascot, Mr. Mucus, to show how the product “combats zombie-like symptoms that come along with a bad cold or flu.” They also encouraged TikTokers to share their own versions of the dance (and had the chance to dance with Mr. Mucus, who appears as a small animated cartoon in the corner of users’ videos) using the #BeatTheZombieFunk hashtag, which has accumulated a whopping 5.9 billion views. While this is the first time the brand has utilized its mascot on TikTok, this isn’t the first time they’ve launched a challenge on the app: In October 2019, Mucinex was the first OTC brand to team up with the app for the #TooSickToBeSickChallenge that garnered over 741 million views. The brand also has been making a play at young consumers in other ways like creating merch and a limited-edition “Sickwear” clothing collection that they debuted on a livestreamed event last fall. 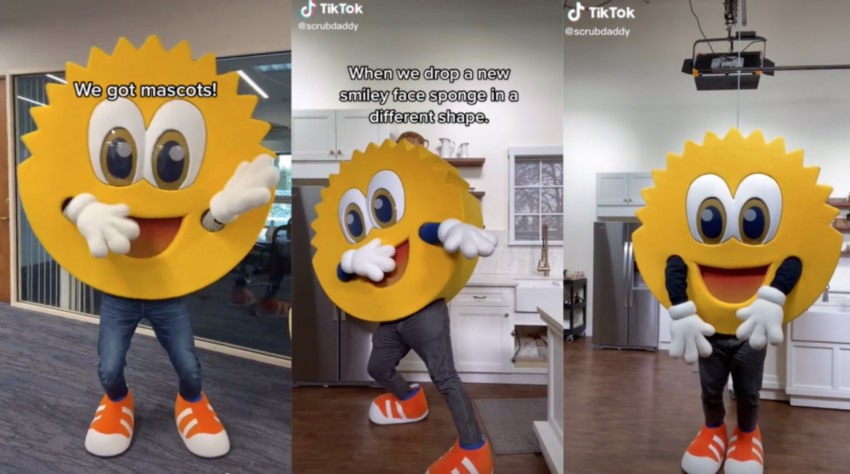 Scrub Daddy
Scrub Daddy is experiencing a second round of internet fame on TikTok. Since its Shark Tank days, Scrub Daddy has garnered considerable fame in the cleaning goods space, and the brand has built an even stronger following with cleaning influencers (yes, that’s a category now) and young consumers in the TikTok era. Scrub Daddy recently reached one million followers on the app and continues to see consistent annual growth: In 2021, the brand experienced 80% revenue growth YoY, and it’s on track to reach $100 million in sales this year. The brand’s TikTok presence is strong (with over one million followers), thanks to a social media team that is able to quickly capitalize on viral trends while putting the Scrub Daddy mascot and giant versions of its smiling sponges at the center of attention. The brand has also built a “cult following” among CleanTok creators: Scrub Daddy works with around 30 influencers who are known for their expert cleaning tips and product recommendations in international markets, including Vanesa Amaro, a housekeeper and TikTok star who has 10 million followers across her English and Spanish language accounts. Since working with international CleanTok influencers, TikTok has lifted international sales from 5% of the company’s revenue to about 10%. 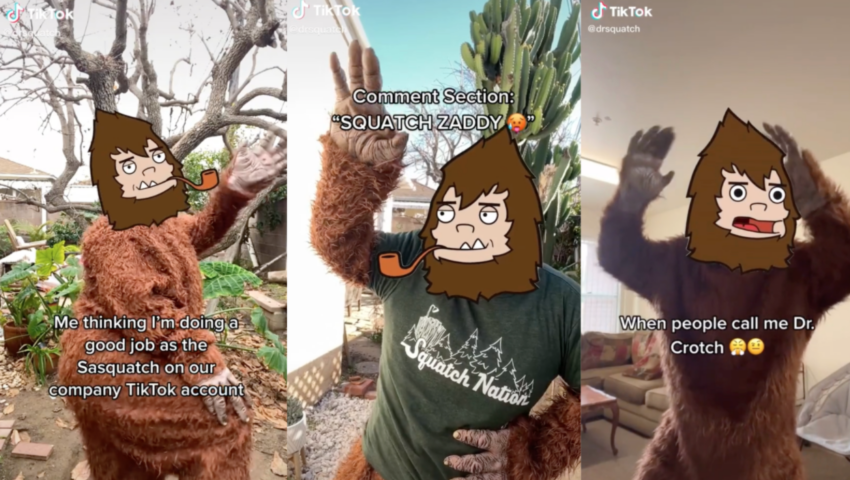 Dr. Squatch’s Sasquatch
​​Dr. Squatch is a natural soap brand successfully connecting with young men via TikTok. YPulse’s social and mobile marketing data shows that 71% of young social media users don’t mind ads on social media as long as they’re entertaining. TikTok continues to be one of the best platforms for authentically reaching young consumers, and DTC personal care brand Dr. Squatch is capturing the attention (and sales) of young men on the app thanks to its ability to stay ahead of trends and internet culture. The brand’s @DrSquatch channel has nearly 200K followers and the brand’s content features everything from internet memes to pop culture references (like nods to Squid Game) while playing on “drop culture” by releasing limited edition products like its Irish cream and whiskey soap for St. Patrick’s Day. Some of its most popular content also features the Dr. Squatch mascot participating in challenges, or making silly videos with the Sasquatch twerking or addressing his fan-made nicknames of “Squatch Zaddy” and “Dr. Crotch.” Dr. Squatch reports around 10-15% of new customers have come from TikTok and has placed in the top 1% of marketers on the social video app according to company data. YPulse’s personal care and beauty research shows that 25% of young men say online / social media advertisements are most likely to influence their decision to buy personal care / beauty products, and Dr. Squatch’s CMO, Josh Friedman, notes “making soap and the shower experience fun and exciting has struck a chord within the TikTok community.”