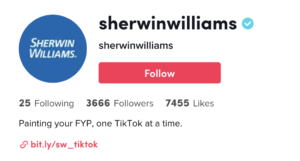 People are calling out Sherwin-Williams for joining TikTok after they fired an employee for his viral paint mixing content, a Twitter bot is publicizing U.K. companies’ gender pay gap in (real) honor of International Women’s Day, Zara’s pink satin dress is the hot new thing in fashion, Ukrainian teens are documenting what it’s like to live during war on social media—plus more internet buzz on this week’s Viral List! 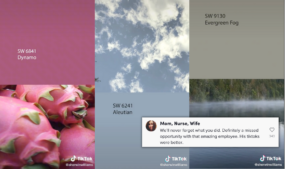 YPulse told you about Tony Piloseno, a former Sherwin-Williams employee who was fired from the company after going viral on TikTok for his creative (and wildly popular) paint-mixing videos. Piloseno used his TikTok presence to benefit the paint brand while he was still an employee, explaining that he’d been “pointing [Sherwin-Williams] to his viral account” as an example that the brand could do something creative on social media to “market their brand to a younger audience.” Unamused, Sherwin-Williams fired Piloseno in late 2020 for making “videos during [his] working hours” and with company equipment, citing, “gross misconduct,” “wasting properties [and] facilities,” and “seriously embarrass[ing] the company and its products.” A little over one year since firing Piloseno, Sherwin-Williams has joined TikTok, and consumers are calling out the brand’s hypocrisy for joining the platform after firing an employee for wanting to amplify the brand’s presence on the app (not so “seriously embarass[ing]” after all). Users are sharing their thoughts in the comments section of Sherwin-Williams’ TikToks, saying, “We’ll never forget what you did. Definitely a missed opportunity with that amazing employee. His TikToks were better.” In a TikTok clip asking viewers to duet Sherwin-Williams’ video with their color palette inspiration, people are commenting, “ask @tonesterpaints” (referring to the paint brand Piloseno created after getting fired) and “were you inspired to make this after firing your worker that gave you the idea?” Sherwin-Williams has also turned off the comment feature on select videos to avoid additional backlash. The Sherwin-Williams controversy is a learning opportunity for all brands to listen to the conversations taking place on social media before going all-in…and listen to the young, creative employees within your network as they provide valuable insight, too. YPulse’s New Content Creators trend research found that 74% of young people who are creating content on social media say they would be excited if a brand wanted to use their content (or credited them) in their marketing / ads, and sometimes the most genuine influencers brands can work with are the young employees (like Piloseno) who are already acting as brand ambassadors. 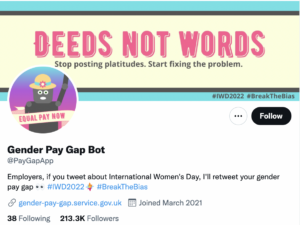 Since the start of March, brands have been sharing their plans for celebrating Women’s History Month while creating campaigns tied to International Women’s Day (IWD). Just like any social issue brands celebrate, cause-driven campaigns run a fine line between falling into the performative activism category or being perceived as authentic. To hold brands accountable for their performative activism-driven IWD posts, a Twitter bot was created to hold brands accountable, outlining in its bio: “Employers, if you tweet about International Women’s Day, I’ll retweet your gender pay gap.” Since joining Twitter, the bot has garnered thousands of followers for quote-tweeting companies that have “congratulated themselves on having female employees and hosting female-only panels” in honor of IWD. (The bot is limited to U.K. organizations since companies with 250 employees or more are required to report data about their gender pay gap by law, with all of the data being published on the U.K. government’s gender pay gap database.) Tweets from the bot that show large pay gaps have gained mass attention. For example, one retweet from the organization Shearman & Sterling that reads, “In this organisation, women’s median hourly pay is 52% lower than men’s,” generating nearly 5K likes and 1300 retweets. The bot has retweeted more than 1,000 companies posts about International Women’s Day, signaling the work that needs to be done to close the gender pay gap in the U.K.—and across the globe—before posting about International Women’s Day. According to the Gender Pay Gap bot’s creators Francesca Lawson and Ali Fensome, the bot’s inspiration stems from their experiences working at companies that promoted how empowering and diverse its staff was when the data didn’t back up these messages, explaining that companies, “Can’t take steps toward resolving a problem that [they] are pretending doesn’t exist. That acknowledgement is the first step to actually considering the future and how you’re gonna fix it.” YPulse’s U.S. and Western Europe causes, charity, and activism research shows that gender equality / sexism is one of the top five issues Gen Z and Millennials are passionate about right now. Before supporting any cause, it’s important to remember that young people really don’t care about “sweet” or “motivational” campaigns that appear socially “good” on the outside, a brand’s culture, values, and ethics must reflect the causes they’re speaking out against in order to truly make an impact on young consumers. 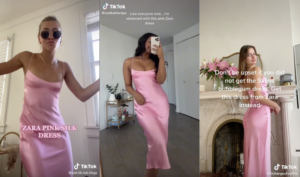 People Are Obsessed With This $60 Pink Zara Dress

This minimal, bubblegum pink satin dress with spaghetti straps has not only garnered more than 2M views on TikTok via #ZaraPinkDress within the last few days, with young women praising it for its high-quality, figure-flattering design. One of the first TikTokers to make the dress go viral was @inchargeofoutfits who posted a video at the end of February saying, “Don’t be upset if you did not get the Skims bubblegum dress. Get this dress from Zara instead.” Since then, TikTokers have been raving about the $60 price tag, “Anything under $100 that looks this good is a win for me,” notes trend reporter Brittney Levine, and documenting their pink Zara dress try on and confirming the dress does in fact live up to the hype. The dress has been such a hit that Zara has sold out of almost all of the sizes for the Satin Effect Cut Out Dress. As one 23-year-old Zara pink dress owner puts it, “It looked like a beautiful piece of clothing, like a luxury item, and it was an affordable price point. And it looked good on so many different body types.” Zara continues to be a popular destination for young fast fashion shoppers, and items like the bubblegum satin dress validate its cult status among youth even more. 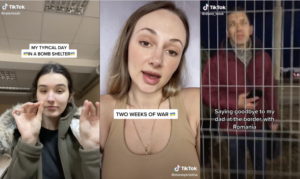 YPulse told you how young people are learning about Russia’s invasion on TikTok via expert-backed advice. Though the platform has also been called out for being a breeding ground for misinformation during this time, it is the expert-backed education from law / history buffs and videos from Ukrainian teens themselves that are giving young people an accurate glimpse into the conflict. One teen who goes by the handle @valerisssh has racked up millions of views for her clips documenting her family’s life in a bomb shelter. In a clip that has garnered more than 37M views, @valerissh shares, “My typical day in a bomb shelter,” documenting how she uses an industrial heat gun to blow dry her hair, her dog who doesn’t understand that they live underground now, and her family’s daily trip outside. She’s also using her platform to share the damaging effects that Russia’s invasion has had on Ukraine, like Putin’s destruction of a children’s hospital, buildings and residences, and clips comparing Ukraine before and after Russia’s attack. More Ukrainian young people including @diana_totok, @alina_volik, @xenasolo, and @moneykristina are sharing their testimonies while giving weekly updates to show how the situation continues progressing. In a video that has racked up nearly 20M views, @diana_totok documents saying goodbye to her dad at the Romanian border as he is unable to leave Ukraine for now. Behind the humanized “day in my life” videos and clips detailing the destruction of Russia’s invasion of Ukraine, these young women’s testimonies provide an intimate look at how families are coping and their experiences living through a war. YPulse’s news consumption and trust research shows YouTube, Instagram, and TikTok are the top three social platforms Gen Z uses to obtain news and information, and the Russia x Ukraine conflict signals how video-first social platforms can be a force for good when it comes to educating young people on international affairs / news in general. 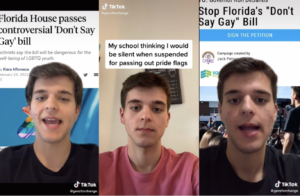 Florida students and Disney employees are speaking out against Florida’s “Don’t Say Gay Bill” after it was made public that Disney had previously donated to politicians who pushed the legislation forward and CEO Bob Chapek refused to publicly condemn the bill in an official statement. Since then, Chapek said he will meet with Florida’s governor to address the bill and is donating $5 million to LGBTQ+ rights discrimination.

Meanwhile, the Human Rights Campaign said it will not take Disney’s donation “until meaningful action is taken” on the “Don’t Say Gay” bill.

In an interview with Variety, Kim Kardashian offered “the best advice for women in business,” and people are calling out how her advice is insensitive and tone deaf to the majority of women in business who didn’t come from a wealthy, famous family.

Lettuce chips—which are basically just a salad with Italian dressing—are racking up a (surprising) amount of views on TikTok.

Doja Cat created a song in honor of Taco Bell’s famous Mexican Pizza, hinting that the discontinued menu item could be making a comeback.

Current and former Apple employees are calling out the company’s treatment of its female employees after it shared a video honoring women in the tech and creative industries for International Women’s Day.

Travis Scott is launching a safety initiative known as Project Heal in an effort to address the November Astroworld tragedy and protect future concert attendees.

A film reviewer’s critic of Disney Pixar’s Turning Red is circulating Twitter as users accuse him of writing off the film because it followed Asian characters, whom he criticized as “unrelatable.”

Marvel is updating its portrayal of an Indigenous woman in its recent “King Conan” comic miniseries after Indigenous comic book artists and fans stated that the character’s depiction was demeaning and disrespectful.

Never Have I Ever is getting a fourth (and final ) season on Netflix.

Love is Blind fans are getting a third season that is set to premiere next year.

Disney employees involved with its animation studio wrote a letter alleging that the company censors same-sex affection in Pixar films.

North America
Young People Are Seriously Done With Facebook on The Viral List
TL;DR Facebook is in hot water with already waning young users for supplyi...
North America
4 TikTok Influencers You Haven’t Heard of Yet, That Millions of Gen Z and Millennials Have
“I never expected this to blow up” is the new “thanks for one million subscribers” ...
North America - Western Europe
BarbieCore, Instagram Updates, and Scarlet May on The Viral List
TL;DR BarbieCore represents a new, inclusive image of femininity Instag...