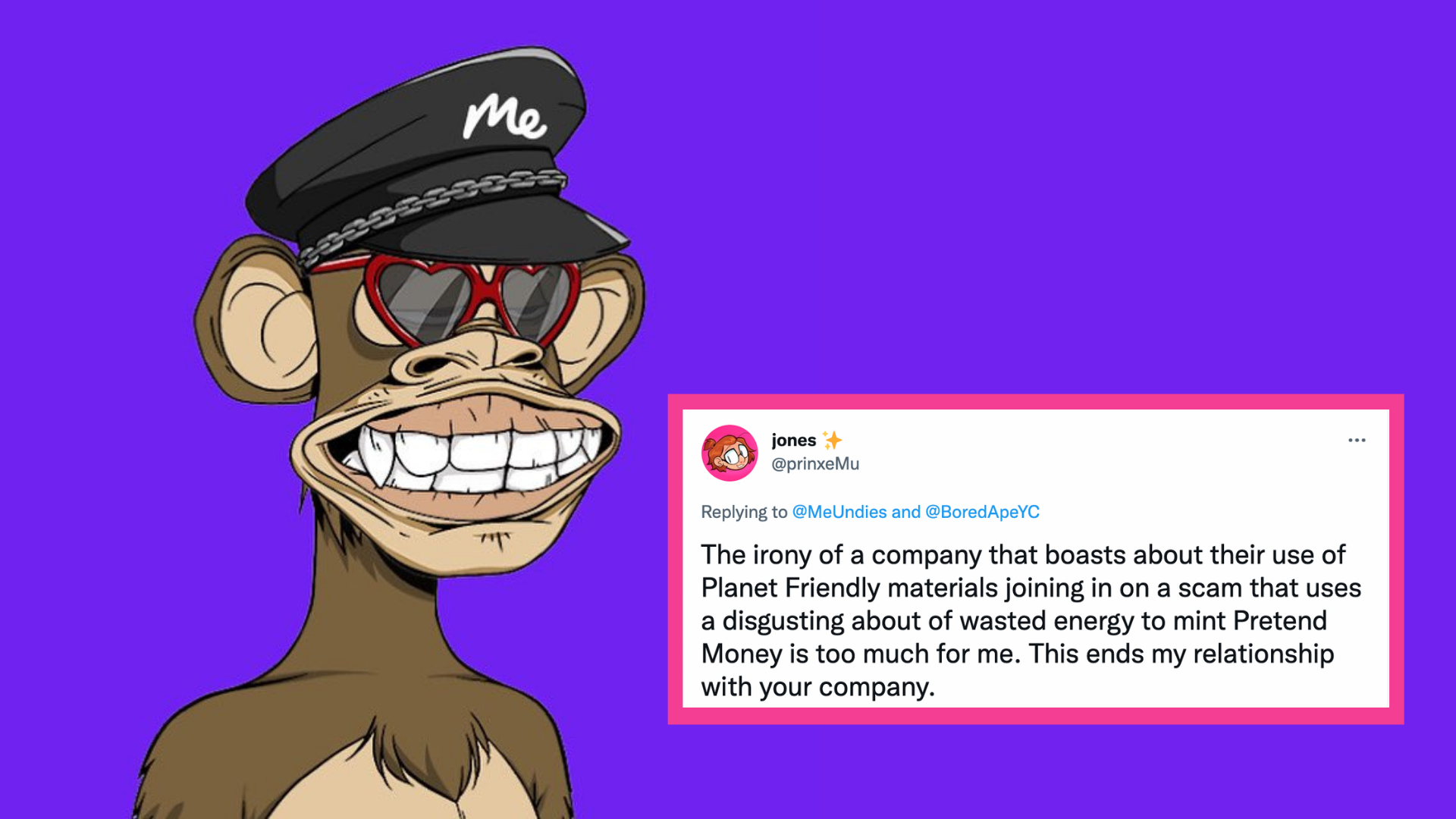 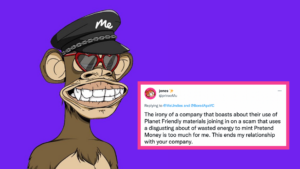 MeUndies announced its NFT plans and consumers were less than impressed, Adidas took a bold (but much appreciated) approach to introduce their new sports bra collection, young couples are obsessed with the NoteIt and Locket apps, TikTokers are sharing the special moments that have become core memories (just like in the movie Inside Out)—plus more internet buzz on this week’s Viral List! 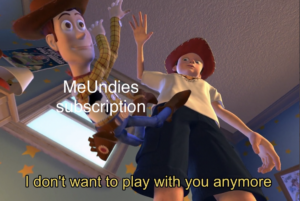 Another day, another NFT story. But instead of the usual “x brand launched x NFT…” today we’re talking about an NFT announcement gone wrong—and though the space has become lucrative for some involved, take this as a reminder that non-fungible tokens aren’t for every brand. At the end of January, MeUndies announced on Twitter that it was joining the Bored Ape Yacht Club (an NFT collection and community featuring different takes on the same image of an ape), sharing an image of MeUndies’ take on the NFT (see above). And instead of a wave of positive reactions hyping up the brand’s NFT, the post garnered more than 1K responses and 263 retweets within a few hours as users called out the hypocrisy of a sustainably-minded brand joining a space that has been criticized by climate activists and environmental experts. One reply reads, “The irony of a company that boasts about their use of Planet Friendly materials joining in on a scam that uses a disgusting about [sic] of wasted energy to mint Pretend Money is too much for me.” Meanwhile, one of the most-liked replies under the brand’s Twitter announcement is a step-by-step guide on how to cancel a MeUndies subscription, while other posts feature anti-NFT memes and pledges to stop shopping with the brand and switch to TomboyX. As brands continue launching NFTs to claim their space in the conversation, it’s natural to jump on the hype wave out of fear of being left in the dust. But before launching a NFT, it’s important to understand that it has been met with both backlash and praise, and brands shouldn’t abandon their core principles just to get in on the hype. As TomboyX’s CEO explains, “Brands should be asking themselves, ‘What business are we in? And stay laser-focused on driving every decision through that. FOMO is not a brand pillar for us, but sustainability is. Crypto is resource-intensive, while we’re trying to reduce our impact and footprint.” There’s no question that NFTs are a hot button topic, but deciding to stay out of this space doesn’t mean you’ll lose your standing with Gen Z and Millennials. Our research shows environmental causes / climate change is one of the top social causes these gens want brands involved in. And if sustainability is in your core—or you’re making changes to become more sustainable—it may be best to examine how an NFT launch would really impact your brand. 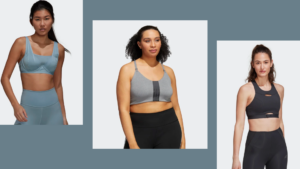 To announce the launch of its new sports bra collection, Adidas tweeted an image featuring 25 different pictures of women’s breasts, nipples included. The tweet has garnered more than 3K retweets and nearly 25K likes since it was posted Wednesday morning, and industry leaders and users have been celebrating Adidas’ bold move. Cindy Gallop, an ad industry equality advocate, replied, “WELL DONE @adidas!,” and though some Twitter users have made (plenty of) jokes about the brand’s move, too, Gallop tells the WSJ, “The range of breasts respects the full glorious range. And they have done that in a completely nonsexual context. This is an entirely justified promotion of sports bras.” The tweet was intended to introduce Adidas’ new sports bra collection, which features 43 different styles “so everyone can find the right fit for them,” and Adidas chose Twitter as the launch platform because unlike Instagram and Facebook, images of women’s nipples don’t violate nudity guidelines. In addition to inclusive sizing for all breast shapes and sizes, the female-created line is activity-centric, featuring options designed specifically for lounging, high-impact exercise, low-to-mid intensity movement, and more. According to the brand’s senior director, “There is a sizeable data gap when it comes to sports bra development, so we worked with experts in breast health [at] University of Portsmouth to challenge ourselves and drive forward innovation to better meet the needs of our female athletic community.” Sports bras in particular are “foundational” in women’s workout gear, and Olympic athlete and Adidas brand ambassador Mikaela Shiffrin explains how having a bra designed for specific activities is vital to training comfortably and confidently. Last summer, a Shefit sports bra went viral on TikTok as users celebrated the product for being one of few in the market that allows wearers to “personalize [their] fit and control [their] level of support.” While brands like Lively, Parade, and Cuup have weaved representation and body inclusive messaging into their core from the beginning, Adidas’ campaign shows how more traditional brands are revamping their strategies to use un-retouched images, create product lines that are designed by women of all backgrounds, and paint a more realistic picture of what female bodies experience. YPulse’s Representation in Action trend research shows 34% of young female consumers say their body measurements are an aspect of their identity they feel is currently underrepresented or discriminated against. 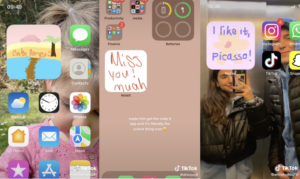 NoteIt And Locket Are The Hottest New Apps for Young Couples

Though digital apps aimed at couples are nothing new—YPulse predicted that apps for couples would continue taking off with Gen Z and Millennials—NoteIt and Locket are two apps that have been racking up downloads as young people find new ways to remain digitally connected with their SOs at all times. Locket allows users to send photos to each other and NoteIt lets people send drawings / scribbled notes. And thanks to the widget shortcut available on newer iPhones, new messages pop up on their home screen in real time, giving them even more ways to personalize their phone features. The apps are having a moment on TikTok as users share how they’re using them to keep up with their boos, sharing funny jokes or heartfelt messages: #NoteIt has garnered nearly 60M views and #Locket counts 103M views. Meanwhile, Locket became the #1 app in Apple’s App Store last month. One user tells BuzzFeed News, “During COVID, having something like the NoteIt or Locket app allows you to get reassured throughout the day like,’ This person cares about me.’ Even if it’s just once a week, it’s like it’s own love language, making art for someone else.” The pandemic has undoubtedly taken a toll on young people’s romantic lives, and for those who aren’t in a committed relationship, new dating apps like 2up and Snack have been entering the scene to spice up their dating lives. 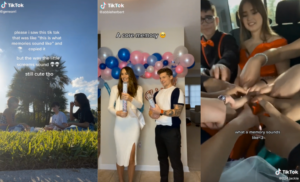 Everyone is Sharing #CoreMemories on TikTok

Since the beginning of the pandemic, romanticizing your life has been a TikTok trend as users find beauty in the mundane—and try to maintain their mental health amid life’s endless unknowns. First, there was the popular TikTok sound, “you have to start romanticizing your life / you have to start thinking of yourself as the main character,” and then there was the main character trend, photo dumping, and now, core memories. #CoreMemories has garnered 545.8M views, and TikTokers are using the tag to share the core memories that have significantly impacted their lives. The trend is loosely inspired by Pixar’s Inside Out where the main character’s treasured core memories (moments that have significantly impacted her life) are kept safe inside the emotions’ Headquarters and power the biggest parts of her personality. With that in mind, TikTokers have been sharing the influential life moments representing their core memories using these two sounds (the second is actually from Inside Out), coupled with the “echo” voice feature for dramatic effect. Whether it be reminiscing on life milestones with friends and family or capturing the moments that make them feel alive, the #CoreMemories trend is giving everyone an extra dose of nostalgia and serotonin at the moment, while once again allowing them to be the protagonist of their own life. 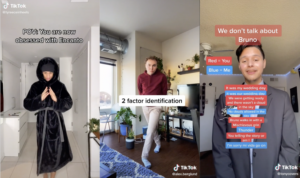 People can’t stop making TikToks using the song, “We Don’t Talk About Bruno” from Disney’s Encanto—more than 600K videos have been made using the track.

A video of an Amazon driver leaving a heartfelt message while delivering packages to a Mississippi home is circulating TikTok.

TikTok’s Black History Month event with Nicki Minaj was called out for being taken over by non-Black creators.

TikTokers aren’t a big fan of the way Meena the elephant from Sing acts like a “pick me” girl (a.k.a. someone who loves attention).

Leslie Jones was reportedly pressured by NBC to stop her entertaining Olympics coverage.

Disney’s Encanto soundtrack is still going strong as the No. 1 album on the Billboard 200 chart for a fourth week.

Ed Sheeran and Taylor Swift have a new song together, “The Joker and The Queen.”

People are holding actress Awkwafina accountable for her use of a “blaccent” and African-American mannerisms in her career.

Zendaya responded to D.A.R.E.’s criticism of Euphoria’s depiction of drug use, explaining that the show “is in no way a moral tale to teach people how to live their life…[it’s intended to] hopefully help people feel a little bit less alone in their experience.”

Disney+ released the trailer for the Cheaper by the Dozen remake starring Zach Braff and Gabrielle Union.

And Disney+ also picked up the new Goosebumps series.