Changing the Definition of the Second Screen 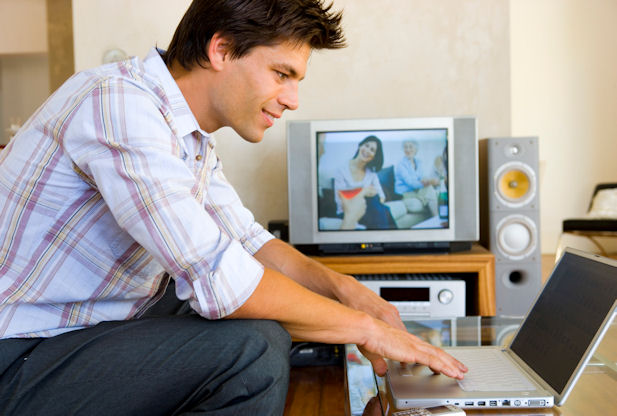 Changing The Definition Of The Second Screen

A lot has been said about Millennials’ growing acceptance of Internet video content. For example, according to Nielsen’s “Cross-Platform Report, Q1, 2012”, a collective 5 hours and 39 minutes of video are consumed through the Internet by 18-24-year-olds per week. While they are also watching 24 hours and 44 minutes on a “live” TV, Nielsen also has been tracking a small but significant decrease in the penetration of traditional television in households across America.

The concept of the “second screen” has been heralded as the multitasking Millennials’ primary method of fitting in so much content-consumption throughout the day. Ypulse has followed this trend and continues to see that while the television is on, frequently a laptop or smartphone is also being engaged. In fact, 9 in 10 (89%) Millennials told us they surf the Web on their computer while watching television on the TV, which has given rise to the popularity of social viewing apps, such as GetGlue.

The “second screen” trend has typically been defined as being multi-device and assumes the consumer is dividing their time between two or more distinct devices. As far as convenience goes, however, having one screen act not only as the primary focus, but also host the secondary focus fits in with how Millennials would actually prefer to consume content. Already, 3 in 4 (74%) report that they watch video content — from YouTube clips to their favorite shows — while also doing their work, all on the same laptop. Similarly, when it comes to just leisurely surfing the Web, there is only a small difference in the incidence of those splitting the computer screen (76%) to those who are using a television plus another device (89%) a few times a month or more frequently.

It seems that the convenience of having it all on one screen is starting to change how this generation handles their multitasking. Laptop manufacturers have caught on to this trend, offering bigger screen options so users can easily split their screen between work and play. Even smartphones are touting their multitasking abilities with things like Pop Up Play to allow the user to text or send email without having to stop watching video. This is the kind of seamless play and integration Millennials crave.

The result is that for this generation, the second screen is often the same screen as the first! While television isn’t being completely turned off, the simplicity of being able to multi-task without using multiple devices is appealing, especially as they take their media to go. And while a majority (74%) of Millennials still say that their television is their favorite spot to tune into their favorite program, the computer (22%) has strong support. Those who prefer to view content on their television primarily cite that it’s bigger and has a higher quality image and sound, but one Millennial states that “it’s less distracting.” Millennials who prefer to view their programs on their computer point to convenience, portability, and the ability to easily multitask as primary reasons for preferring this methodology as one of our YAB members explains. The multiple-screens is starting to become more about multiple windows on one, portable but high-quality screen and as mobile platforms improve, it will be interesting to see how this trend continues to morph over the next few years.

Gwen joined Ypulse with a background in custom research — both qualitative and quantitative — developed while working at RoperASW (now GfK) and Harris Interactive. Having also spent around 5 years on the client side she understands the value of being a partner in the research process. Gwen suspects that her amazing experiences as a double major in Sociology and Communications at Rutgers University led to her passion for youth culture and staying on top of the latest college trends. To avoid the “Freshman 15” most days you can find her either running loops of Central Park or riding her bike along the Hudson River, ever in training for the next triathlon on her schedule.