We’re back with our monthly teen magazine roundup to highlight what’s trending and what’s next in the youth space. Both Seventeen and Teen Vogue’s October issues spotlight some of fashion and entertainment’s finest, along with an emphasis on newcomers, as well as impressive real girls!

Seventeen in particular celebrates fierce, independent females with focus on the “Pretty Amazing” finalists in its second contest to feature a real girl on the cover. These powerful, passionate, and creative young women who each shared their story for a chance to win a $20,000 college scholarship and a cover spot are role models. Yet, they’re also regular teens. And as many magazines have gotten slack for not featuring realistic body images, Seventeen strives to make a difference and showcase inspiring girls who are still relatable, ordinary teens.

Ultimately, Lindsay Brown, a 21-year-old and senior at the University of Notre Dame won the contest for her commitment to helping other girls gain confidence. Lindsay is a soccer star who had a full scholarship and hopes of making it the U.S. Women’s Olympic soccer team. However, she gave up her spot and scholarship to form an organization called The SEGway Project (Soccer Empowering Girls Worldwide and You) to help girls in places like Nepal, Cambodia, and Kenya discover self-worth and confidence through soccer, and to connect those girls with young women in the U.S. In forming the first team in Nepal, she’s already seen changes among girls who are now more eager to raise their hand in the classroom and the boys have started showing more respect for them. Needless to say, that’s pretty amazing!

The October issue also celebrates independence from advice on how to get killer confidence from Kelly Osbourne to real girl stories like an adventurous student who got lost in the woods while hiking and had to put her survival skills to the test. From fashion to lifestyle, the magazine is filled with stories and tips about how to be smart, an individual, and the best version of you.

In exploring this idea further, the other cover girl, Nina Dobrev of “The Vampire Diaries” and the much-anticipated movie “Perks of Being a Wallflower” discusses the importance of being independent and staying true to yourself. She explains her own experiences in becoming an individual and finding happiness in what she likes to do, even if it meant being alone. She eventually formed bonds with people going through the same experiences as her, and advises girls to stick with what they want to do, regardless if it makes them different. 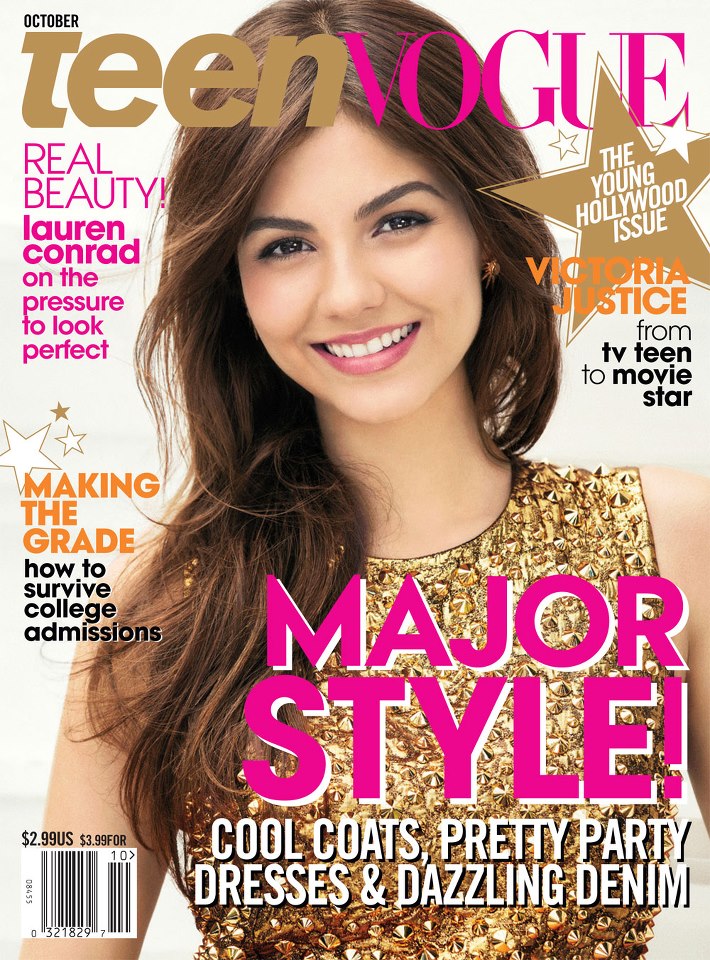 Teen Vogue addresses the pressure many young girls face in thinking that getting into the best college is the end all, be all to having a bright future. Many girls are willing to do whatever it takes including constantly pulling all-nighters, taking the hardest classes, and even cheating, to get the best grades and have the best shot at acceptance to the most renowned schools. However, acceptance to one college doesn’t determine if you’ll succeed in life.

Like Seventeen, the October issue of Teen Vogue also highlights independent young females, but Teen Vogue’s story shows ones in animated form. Characters including Merida in Disney’s “Brave” and Mavis (voiced by Selena Gomez) in the upcoming animated flick “Hotel Transylvania” are strong-willed females, and they too serve as role models for young girls in their refusal to accept the status quo.

Teen Vogue also shows off some of the top rising young stars in its Young Hollywood feature. We’ll definitely keep an eye on the stars in the spread from Alexandra Chando of ABC Family’s “The Lying Game” and Alice Englert of next year’ book adaption “Beautiful Creatures” to Israel Broussard of “The Bling Ring” and Thomas Mann in the upcoming movie “Fun Size.”

Speaking of which, you should also do the same with Victoria Justice, who graces the cover of the October issue. Her hit Nickelodeon series “Victorious” may be in its final season, but there’s plenty more from this talented teen who stars in “Fun Size,” which she describes as “Superbad-meets-Adventures in Babysitting” and she’ll also appear in “The First Time” a teen romantic comedy out later this year.

October magazines left us especially inspired and amazed! As Seventeen’s Editor-in-Chief Ann Shoket writes, “there has never been a more powerful time to be a teen girl!”