There’s a reason they’re always talking about Instagram vs. reality…

If you’re keeping up with what fashion trends the younger gens are loving, you might have noticed that what you’re seeing on your FYP isn’t always what you’re seeing IRL. A scroll through TikTok will show so many niche looks you won’t know which to follow or how to predict what comes next, but looking at a crowd in public will make you wonder if these trends are real at all. So what’s going on?

In reality, the young people leading viral styles are the same ones you see out in sweats—yes, really. Social media is a big part of life for the younger generations, but that doesn’t mean everything they wear on camera is what they’re wearing all the time. Our new Fits For the Feed trend report asked 13-39-year-olds all about their fashion habits, online and off, and found that their online style can differ from the ones they wear day-to-day, and for some social media style is even more important.

These three stats show why Gen Z and Millennials are dressing so differently online and off: 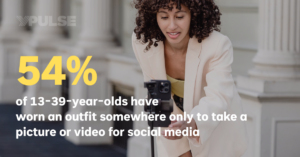 Some fits are only for the feed

Over half of Gen Z and Millennials tell us they’ve worn an outfit just to take a picture or video of it for social media.  In other words, yes, they’re buying and wearing clothes just for their feeds. A quarter even say they have worn comfortable clothing to a location then changed into a different outfit for a social media photo/video. In fact, nearly half of young people tell YPulse they care more about how they present themselves on social media than they do in-person. While that may sound backwards, YPulse data shows that 68% of 13-39-year-olds’ posts are for a broader audience than those who already know them, and since the pandemic began, it’s likely more people will be seeing them there than will in their everyday fits. They aren’t only looking to be perceived well by their friends and family, but the anonymous viewers who explore or For-You-Pages they may end up on. Those who say they create content for an audience beyond their family and friends are far more likely to say that they have worn an outfit just for a social media photo/video.

Some of their feed-exclusive outfits are more dramatic than what you might see young consumers wear in-person because the vast majority of young people agree that “some outfits only look cool on social media.” So, when more extreme (some may even say tacky) looks like the maximalist style are trending, you might not see many people on the street in these intricately-constructed outfits. TikTok “Get Ready With Me” videos are extremely popular, but what they’re getting ready for may just be their content making. And, despite the visibility and experimental nature of trends like this, more than half of the younger gens say they would not wear clothes they describe as “eclectic” or “weird,” even online.

A lot of content creators aren’t afraid to admit that they don’t dress the same offline, though. Viewers can know from their “TikTok Vs. Reality” videos that their everyday lives are not styled quite the same as their feed, which further normalizes dressing up just for the feed. 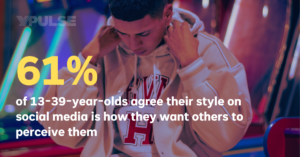 Just because what they wear online can be different from what they wear at school or work, doesn’t mean their style isn’t authentic: The majority of young people say that the style they’re posting on social media is how they want people to perceive them. Now that so many of them consider their feed such an important part of who they are, the way they’re perceived online is incredibly important to them, nearly as important as how they present IRL. Even though they may not want to wear all of it out on the daily, what they post is still what they want to be known for when it comes to their style: 56% tell YPulse their social media style represents their personality better than their day-to-day.

Which styles these generations are interested in showing off vary, but they’ve gotten creative with their styling in a way they potentially couldn’t before social media made it cool. Nearly one third of young people tell YPulse they would rather wear an outfit they love on social media than to work or school as, again, they’ll probably catch more eyes online. In the age of influencers, most users with public profiles are making sure their pics tell the story of who they really are, and who they want to be. 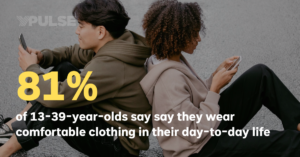 Their closet is split between post-worthy and day-to-day

Most young people say their day-to-day style is comfortable–as opposed to their social media style, which they’re more likely to describe as cool, unique, and trendy. Even though the younger gens may seem like their shopping decisions revolve solely around the latest #core, their go-to-style remains pandemic-chic: casual and comfortable. According to YPulse data, 47% of Gen Z and Millennials say their social media style is different from their day-to-day, and how they describe each shows how. Of the 20 different words they could use to describe their day-to-day style, many of their top choices for online style (trendy, unique, expensive) came nowhere near the top of the list.

Comfort rules their everyday styles, which is why mom jeans and sweats continue to be offline uniforms. Though 60% say they would dress trendy IRL, they’re far more likely to go for “basic” at 74%, so it’s important brands don’t abandon ship on standard investment pieces just yet. Nearly two-thirds of these gens are likely to consider their favorite pair of sweats a part of a dressed up look if styled correctly, so you’ll be able to find them wherever the versatile loungewear is.

YPulse paid users can access the full Fits For The Feed report and data here. 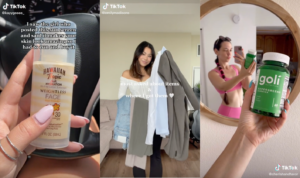 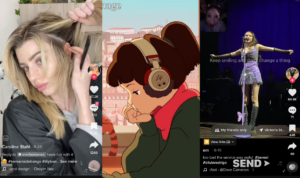 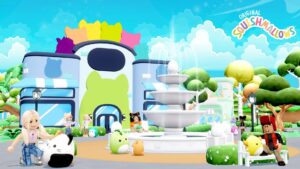 From the Metaverse to...