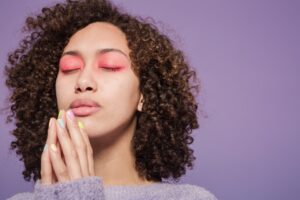 Gen Z and Millennials have been moving away from traditional religion for a while. Now, our data shows the same may be true of young Europeans…

Gen Z and Millennials have long been called the least religious generations to date, and YPulse has been tracking their move away from traditional religion for some time, as they embraced the less defined identity of “spirituality.” In Western Europe, a similar shift has been taking place among young people, who are largely rejecting organized religion. In fact, a 2018 Newsweek article stated that “​​Christianity Is a Dying Religion for Millennials in Europe” and surveys have found that religious belief has only declined among these gens since.

Of course, for some, the pandemic boosted their faith as they looked for meaning in complicated times. In fact, The Times found that more British teens turned to religion in 2020, and research from PEW found that around one in 10 Western Europeans reported that their faith became stronger as a result of the pandemic—though this isn’t nearly as high as in the U.S., where nearly three in 10 said the same. At the same time, the pandemic also led to a “revival of the occult” across Western Europe as young people turned to astrology, tarot, and other mystical practices to help them cope. #WitchTok went mainstream, as did meditation and other unaffiliated spiritual practices.

So where do young Europeans stand on religion now? In our first Religion & Spirituality report for Western Europe, we got the lowdown on young Europeans’ beliefs and practices now. Here are three stats that tell the story: 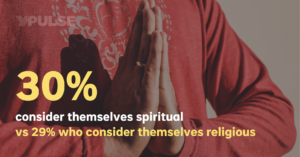 They identify as spiritual (slightly) more than religious.

Much like in North America, young Europeans are nearly equally likely to identify as religious and spiritual. But, that said, it’s clear that spirituality is rivaling religion in the region, as is no belief at all: 42% of young Europeans say they are neither spiritual nor religious, making this the top way young Europeans identify. Young Italians are the most likely to say they’re spiritual, and they have the greatest divide between spiritual (38%) and religious (26%) identities. Meanwhile, young North Americans are more likely to hold both beliefs: 34% of North Americans consider themselves religious and 34% say they’re spiritual. In other words, religion may be dwindling even more among Gen Z and Millennials in Western Europe, regardless of any pandemic-created boost of faith. 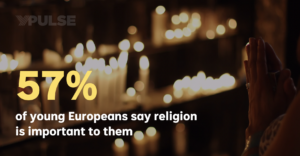 The majority of young Europeans still consider religion an important part of their lives.

Despite the low amount of young Europeans that identify as religious, the majority of young Europeans still consider religion an important part of their lives, which changes the story a bit. Millennials and males are more likely to agree with this statement than Gen Z and females, and young Germans are the most likely to say religion is important to them (62%). But the distinction is that “religion” may not look as it once did. After all, just one-third of young Europeans say they believe in God, and 52% say organized religion is a thing of the past. Instead, they’re finding meaning outside of traditional religious sources… 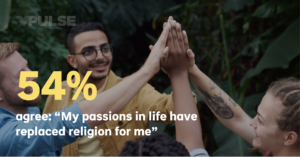 Over half say their passions have replaced religion in their lives.

While religion may still be important to them, the majority of young Europeans are finding alternatives to the support and guidance organized religion once provided. Over half of young Europeans (and three in five British and Spanish consumers) say their passions have replaced religion for them, indicating they’re finding community and purpose beyond church. In fact, our survey asks young consumers to tell us what exactly has replaced religion for them, and their answers range from sports to music to outdoor activities. Meanwhile, when we ask where they turn for guidance and support, less than one in ten say religious organizations and figures, opting instead for co-workers and—yep—online influencers above all else. While we wouldn’t go so far as to say that work or social media are their new belief systems, it’s clear that young Europeans are finding purpose and guidance in a way that fits their lifestyles, and will likely continue to do so.

Western Europe
These Are Young Europeans’ Top 15 Hobbies Right Now
Hobbies are a source of community for Gen Z and Millennials. Here are the ones they...
North America
Young People Are Saying Goodbye to the iPod on The Viral List
TL;DR: RIP, iPod—Apple is going to discontinue making the devices after ne...
Western Europe
Are Young Europeans Into the Mystical and Magical?
From tarot to crystals to astrology, young Europeans are turning to the supernatura...