5 Fashion Trends Expected to Take Off With Gen Z & Millennials 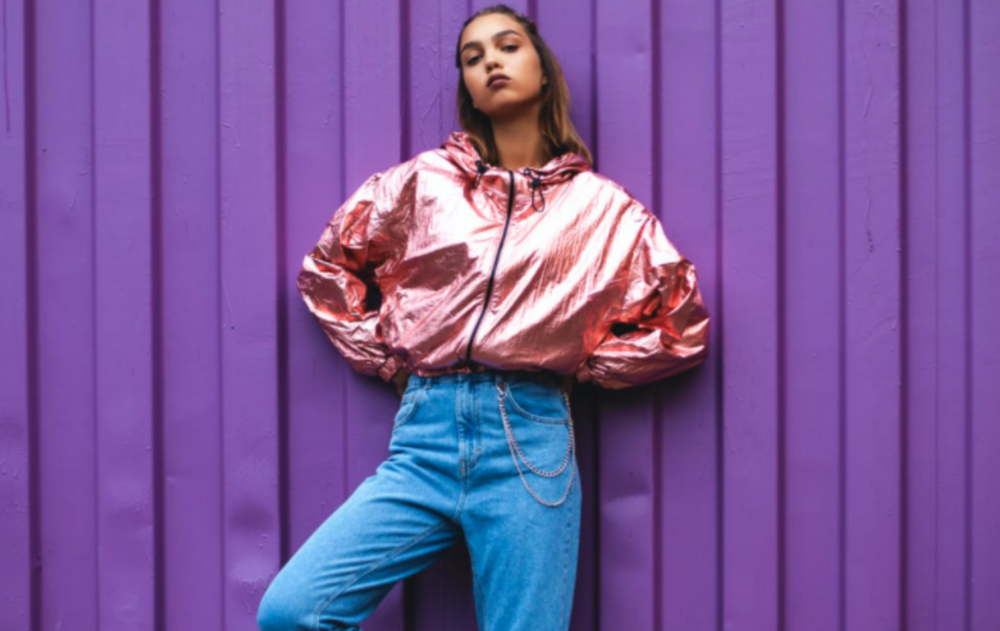 From dopamine dressing to dystopia-core, these are the fashion trends and aesthetics expected to take over young people’s lives this year…

Though the last two years have, yes, been dominated by sweatsuits, new (non-comfy-oriented) fashion trends have emerged during the pandemic. You know that cottagecore was the aesthetic in 2020, and last year saw the continuation of the trend, along with the emergence of other aesthetic-based styles like dark academia. Of course Y2K-era fashion, which we’ve told you has been big for some time now, especially with Gen Z has also grown. According to fashion experts, 2000s-inspired looks are expected to continue to blow up in 2022 with the return of low-rise jeans (sorry, Millennials), cutout mini-dresses, lace-up tops, and sequin tops (think Euphoria-inspired fashion), and “indie sleaze” (a.k.a the Tumblr aesthetic of the 2010s), which is inspiring searches for platform boots, sheer tops, and “naked” dresses.

But the new year is bringing new styles as well. We told you about beauty trends young people will be fueling this year, but what fashion trends will they be flocking to try in 2022? We looked at some of the biggest fashion and style predictions from celebrity stylists and experts like Pinterest, Lyst, Trendalytics, and Instagram, while analyzing it with our own data and found five that could be big with Gen Z and Millennials in 2022: 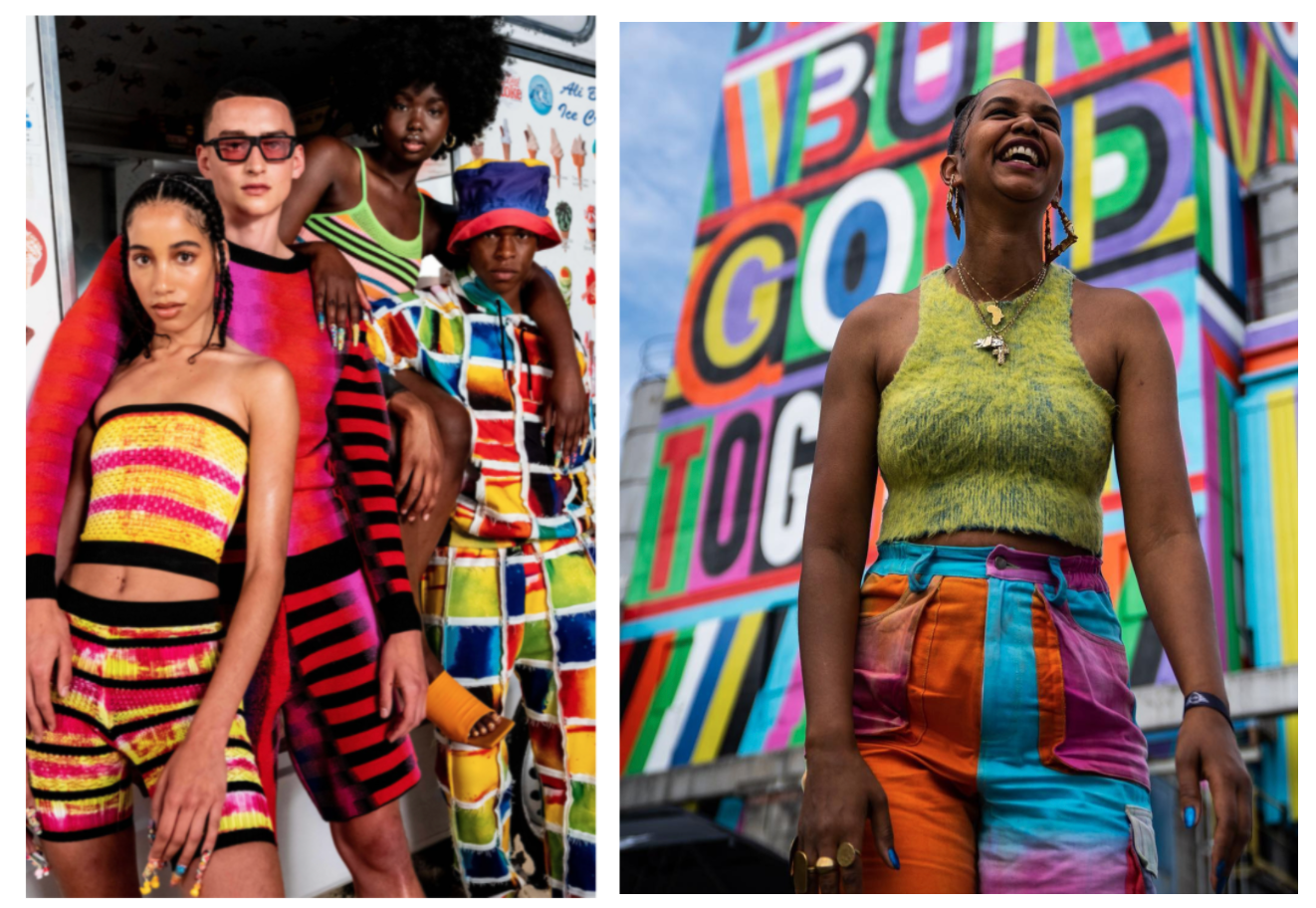 Dopamine Dressing & Maximalism
At the beginning of the pandemic, young consumers fueled a boom in the athleisure and loungewear industry by wearing comfy, at-home wear in quarantines. But as lockdown restrictions began to ease up, more and more young people have been pushing aside chic, black apparel to experiment with mixing-and-matching vibrant, colorful clothing and vintage wares to express themselves as they head back out into the world—a trend which has become known as “dopamine dressing.” The trend is all about “dressing loud with vibrant and colorful pieces, whether it’s a pop of color or a bold outfit.” Instagram predicts that maximalist fashion will take over as young people use it “as a vehicle for joy, optimism, and self-expression.” Trendalytics is also predicting that “joyful fashion” will be a hit this year, with searches for tulle midi-skirts up 158%, sequin trousers up 147%, and feather trim dresses up 138%. One 25-year-old told Harper’s Bazaar: “Because of the pandemic, my style had a rebirth,” describing her new style as “Bratz Doll gone thrift shopping.” Embracing eccentric clothing isn’t all about going out and showing off one’s fashionable ‘fits, either; it’s about bringing the “human element” back into fashion as content creator Maxine Wylde says, dubbing the growing interest in multicolored outfits as “kidcore.” Young people were already getting dabbling in the maximalism aesthetic when it came to decorating their homes, and we told you that they want to be more adventurous in their aesthetic, with Gen Z more likely than Millennials to say they want to dress more boldly / more experimentally and wear brighter makeup in the new year. In line with dopamine dressing, specific trends are already starting to take off online: take #clowncore for instance, which is a colorful new aesthetic inspired by attire traditionally worn by, well, clowns. Refinery29 describes it as “balloon pants, bows, and polka dots—with a maximalist fashion spin.” So, expect Gen Z to and filling their closets with bright and colorful clothes and accessories as the new year heats up. 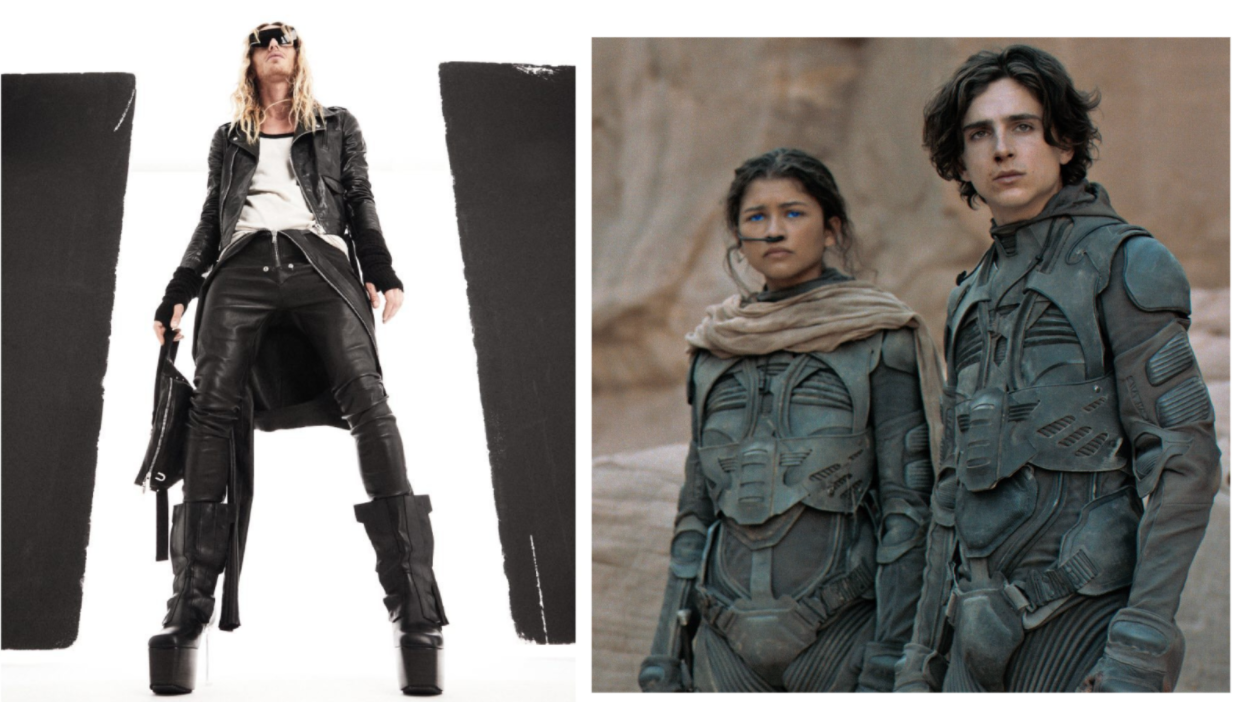 Dystopia-core
Of course, every trend has an opposite, and the counter-trend to dopamine dressing may be dystopia-core. Nearly two years into the pandemic, perhaps it was inevitable that young people would find an aesthetic inspired by it. “Dystopia-core” is a new take on pandemic-era grunge that takes inspiration from dark cinematic fantasies like Dune and The Matrix Resurrections films. Long leather jackets, cargo pants, and black everything are some of the items that define the trend, and several “dystopia-core” looks can be found on TikTok under the #AvantApocalypse hashtag, which has over 300K views. The aesthetic is also very much inspired by the goth and emo punk revival that has been taking over social media in the last year. Fashion designer Rick Owens (a.k.a the fashion’s industry “Lord of Darkness”) has already been leaning into the trend by creating several avant apocalypse-inspired pieces. One fashion professor told The Guardian that the look is “a reaction to the current post-apocalyptic atmosphere,” explaining that living through world crises has made young people embrace fashion that is both utilitarian and “symbolic of the shield we’ve been creating around us.” Our research shows that fashionable clothes for going out, brightly colored looks, and more toned-down minimalist fashion are some of the fashion trends Gen Z and Millennials are interested in—signaling that both “dystopia-core” and “dopamine dressing” can coexist as young people continue using fashion to reflect the current times. 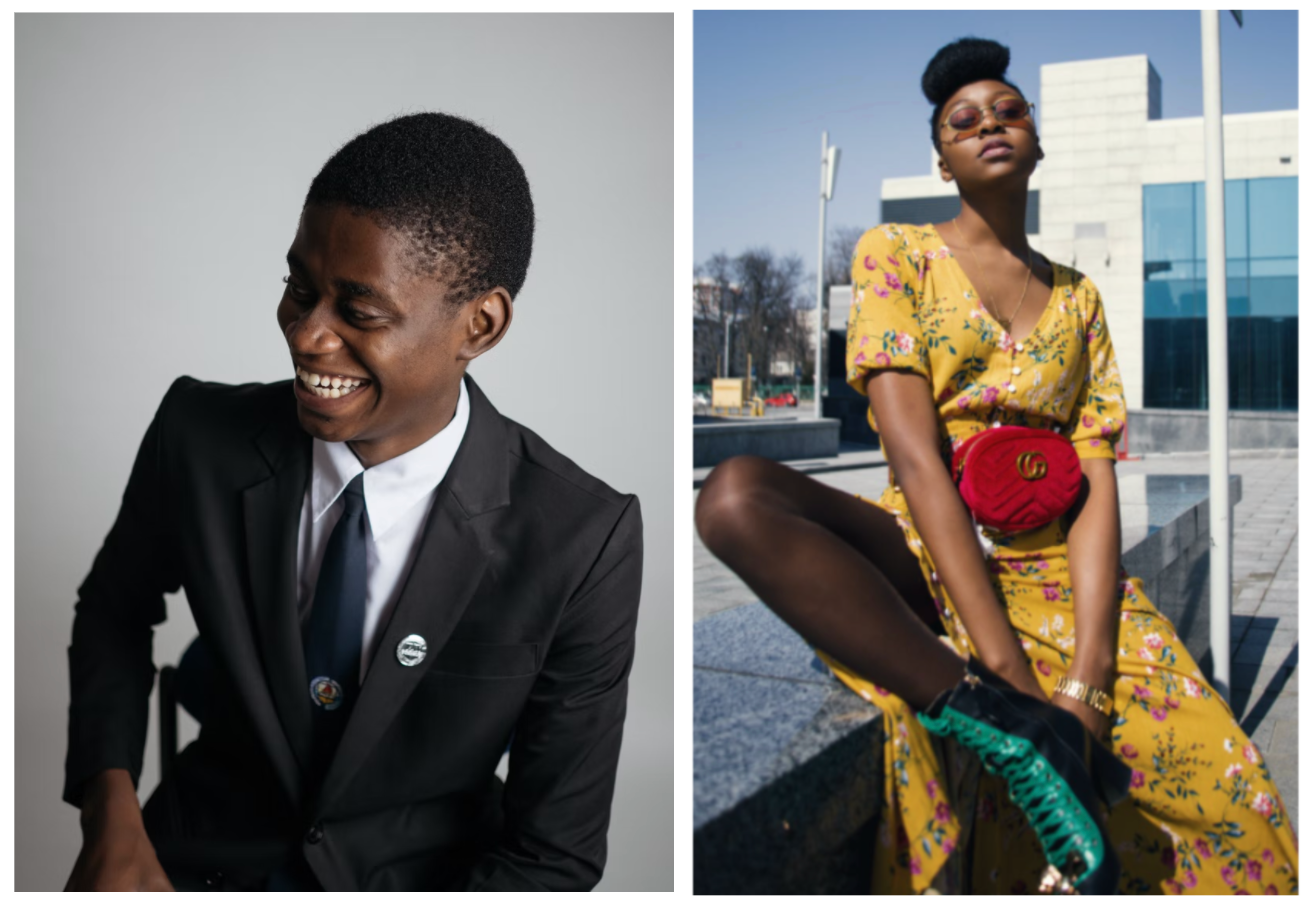 Casual Luxury
YPulse’s recent luxury report found that the majority of 13-39-year-olds say luxury brands should make some affordable items so more people could own them, and we’ve told you about the luxury brands young shoppers want to own. According to Page Six, “everyday casual” is expected to be big as young people start going out again. Lyst predicts that “quiet luxury” will be in demand this year as well, which is described as minimalistic neutral-tone, wardrobe-building staples. Their report noted that searches for white shirts are up 40% and searches for wide-leg suit pants are up 25%, while free-flowing shapes are also in, with “oversized” and “maxi” are among the most popular keywords for dress searches while searches for “oversized shirts” have increased 84% over the past two months. Elsewhere on the luxury side, searches for leather loafers, spurred by Prada’s Monolith “It” shoe, have climbed 70% as well. Celebrities like Cardi B have been recently spotted wearing luxury brands like head-to-toe Dior while running quick errands, like taking her newborn son for a stroll. In the last year, luxury fashion brands have been infiltrating TikTok to reach young consumers—and we told you how TikTokers were using the #CheapestThing, which currently has four million views, to show off the cheapest item they could buy from luxury brands like Chanel, Gucci, Prada, and Hermès. Celebrity stylist Quammie, who has styled actors like Candyman and The Matrix Resurrections star Yahya Abdul-Mateen II, told Page Six that “couture is starting to feel more approachable and wearable.” 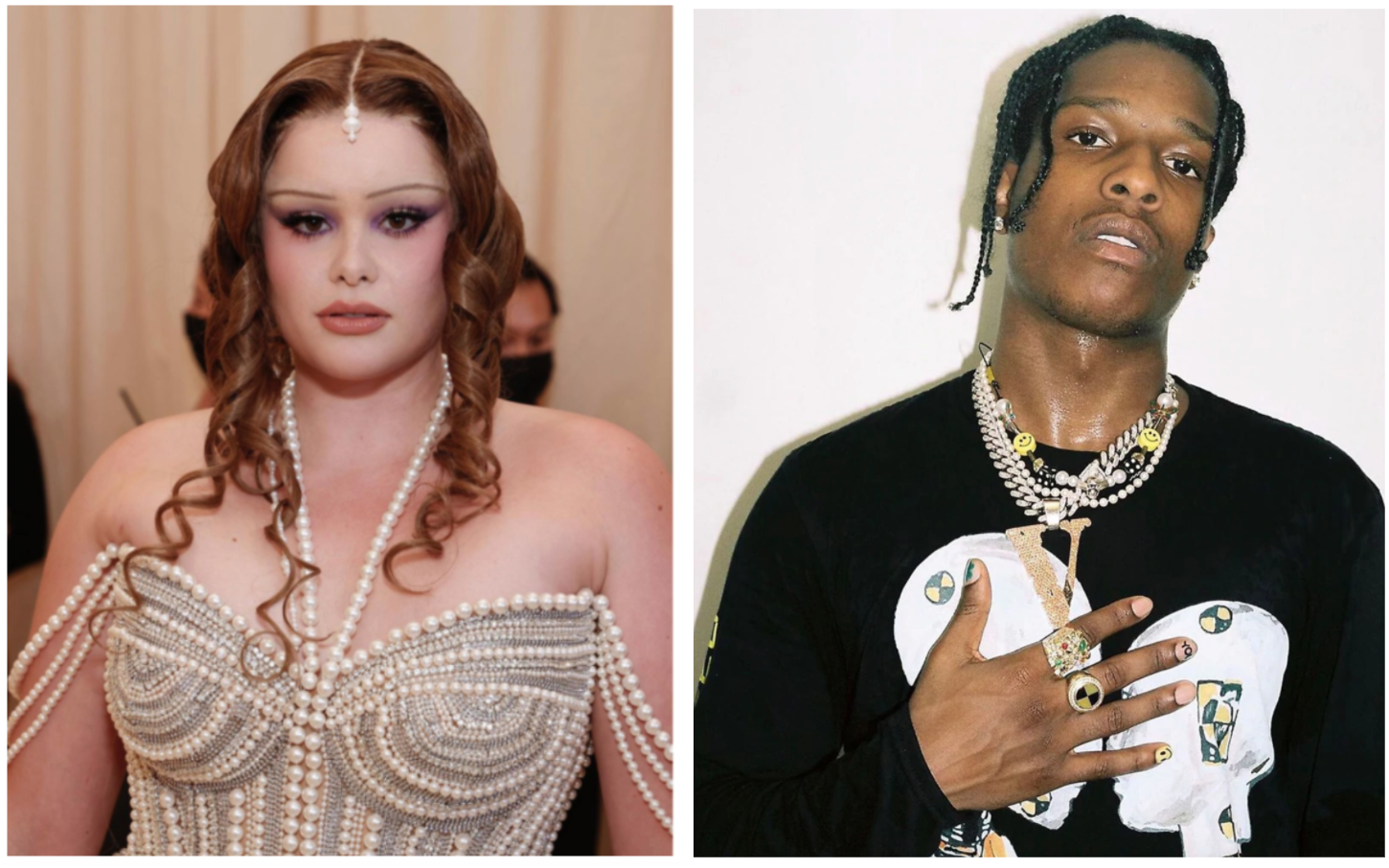 Pearlcore
You already know about the dainty and softer trends like cottagecore and lovecore. But one of the newer “core” fashion trends that has been blowing up in recent months is “pearlcore.” According to Pinterest’s annual trend report, pearls have been “anointed as the go-to accessory and embellishment.” The company lists things such as “pearl gown” and “pearl ring” as trending search terms, but it’s also expected to be a closet staple as well. While pearls have often been associated with “preppy aesthetics,” fashion expert Deni Todorovič believes that it will add “edge, texture” and a “gorgeous iridescent glow” to everything from street style to red carpet looks. For instance, one of last year’s most-talked about Met Gala looks was Euphoria star Barbie Ferreira’s “pearl-encrusted dress.” Celebrity stylist Amanda Sanders told InStyle that fashion designers have been making pearls appear more youthful to attract younger generations. Pinterest also reported that pearls could potentially “make a dent” in menswear this year since “pearl necklace man” also made the top search terms in the category, which has been influenced by male celebrities who have constantly been spotted wearing the accessory, including Harry Styles, A$AP Rocky, Shawn Mendes, and Pharrell. Pearlcore has been described as “cottagecore meets regencycore” and have been linked to the rise in “royalcore,” thanks to shows like Bridgerton, The Crown, and The Great. So far, the hashtag #pearlcore has over 71K views on TikTok and of course, with Bridgerton premiering its highly anticipated second season in March, we can imagine the “pearlcore” trend will only to continue to explode. 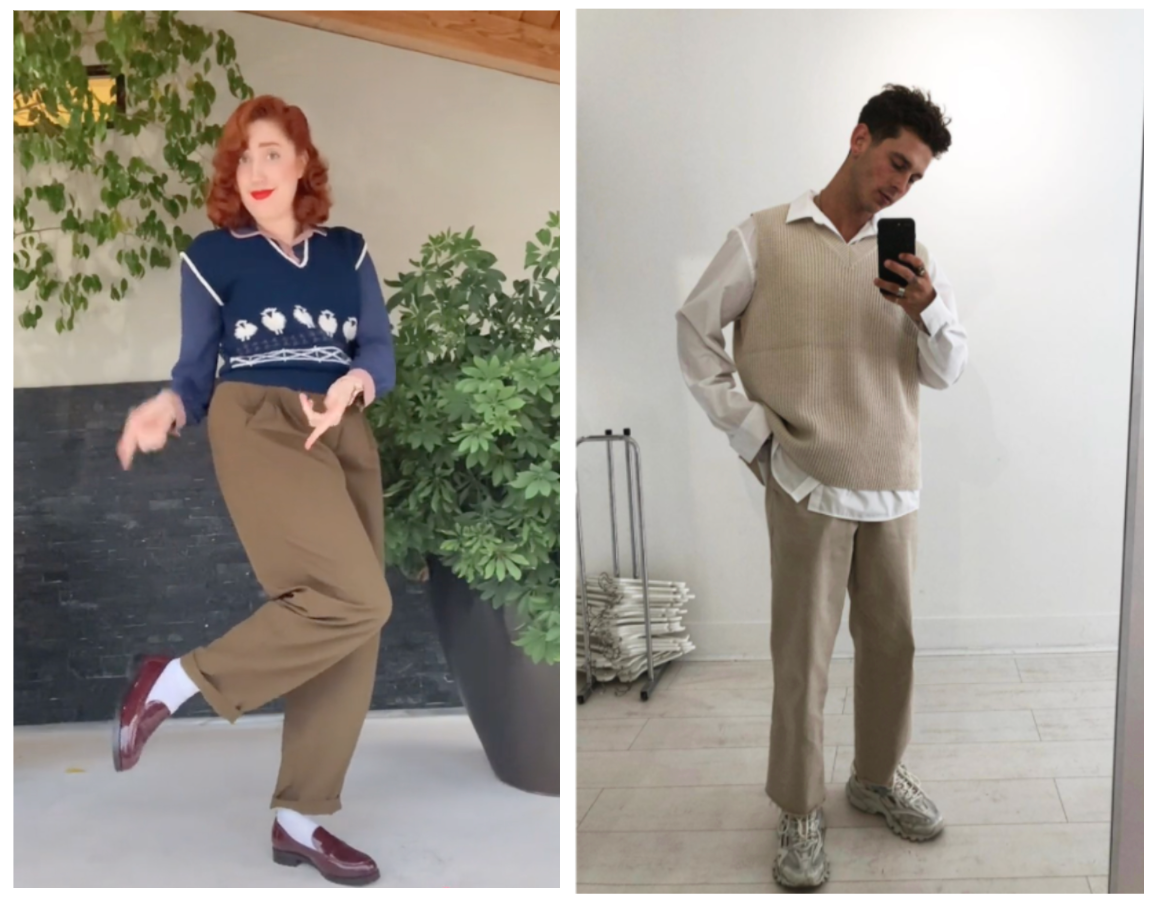 Grandpacore
Listen up, folks. Dressing up like your grandparents is totally hot right now. Last spring, the Wall Street Journal reported that Gen and Millennials were starting to get into “grandpa style” and looking to the elderly in search of more “invigorating” clothing. The appeal is their “effortless and fresh” styles that don’t follow fads and trends—comfortable looks that “skews more elegantly traditional than normcore.” On TikTok, the hashtag #grandpacore has 12.4 million views, and Instagram accounts like @gramparents and @chinatownpretty have been sharing the bold and timeless fashion choices of older generations, and it’s clearly striking a chord with young consumers. According to Trendalytics, “grandpacore” is expected to be the new normcore in 2022 and will especially be a hit in the men’s fashion space. Searches for oversized cardigans were up 173%, grandpa sweaters up 157%, and relaxed jeans up 5%. Stylist and founder of styling and consulting firm LRL Group Lauren Rae Vigneron projects that cable knit sweaters and “dorky prints” will be all the rage, and points to Harry Styles as a celebrity who has become one of the young trendsetters to fuel the trend. While the fashion and beauty industries tend to overlook older generations, it seems that Gen Z and Millennials are admiring, and even replicating, their creative and timeless looks as young shoppers look beyond loungewear. The grandpacore trend also aligns with our Cult of Ugly trend research, and is an extension of it, as young people look to their grandparents’ closets for future style inspo.