Chess is getting an esports makeover.

Chess is getting an esports makeover. Young chess players are livestreaming their games, and building online audiences that are winning the game new fans. Twitch formed a partnership with Chess.com in 2017, and one of the pioneer channels, Chessbrah, has accrued 100K followers and grown into “the first company built around chess streaming.” According to Twitch, time spent watching chess has risen by more than 500% since 2016, and the 2018 World Chess Championship drew 4.4 million viewers. (NBC News)

Brands need to understand more about young mobile gamers. YPulse’s gaming research shows that 63% of 13-36-year-olds play mobile games weekly, and they react to marketing differently. According to a Tapjoy survey, 64% of mobile gamers prefer to shop directly from brands than third-party retailers, and over 80% subscribe to at least one clothing or lifestyle service. The majority of young mobile gamers are shopping for clothing or lifestyle products on their phones, and they’re more likely to engage with in-app rewarded ads than social media sponsored posts. (Mobile Marketer)

Food and beverage brands continue to invest more in the growing esports space.

Food and beverage brands continue to invest more in the growing esports space. Coca-Cola signed a multiyear entitlement partnership with e-NASCAR, the esports arm of the car racing association, while Mars’ Snickers recently acted as the presenting sponsor of Madden NFL 20 Club Championship, an esports tournament hosted by video game maker Electronic Arts. According to an Institute of Food Technologies study, 74% of 18-to-24-year-olds say they often snack between meals, pointing to why brands like Coke and Snickers are vying to establish themselves in the world of esports. (Marketing Dive) 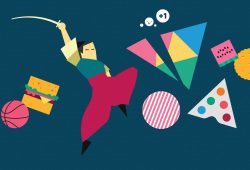 How This App Is Tackling Math Anxiety for Kids

Mathematics anxiety is a widespread phenomenon that not a lot of people know about, but many experience. Funexpected wants to change that with their app that merges math with mobile gaming… For the next generations,…

FaZe Clan is launching a reality show to find its next gaming star on Quibi.

FaZe Clan is launching a reality show to find its next gaming star on Quibi. (If you’re confused about what some of those words mean, FaZe Clan is a somewhat notorious esports organization, and Quibi is a soon-to-launch mobile-only streaming service from Jeffrey Katzenberg.) Despite some past controversies, FaZe has has been growing their presence through an apparel line and various advertising deals with young gamers—and now they’re producing a show for Quibi that merges streaming, reality TV, and esports. Faze Up will bring six of the app’s subscribers to the clan’s mansion to compete against each other in a series of real-life and gaming challenges—until one is left standing. (The Verge)

Nintendo was slow to jump into mobile games, but now they’ve reached $1 billion in revenue.

The Red Cross is using Fortnite to connect with the next generation.

The Red Cross is using Fortnite to connect with the next generation. Usually, the biggest objective Fortnite is to kill, but the partnership has created a new “Liferun” game mode where users instead complete four missions to help save lives, which raises awareness about what the ICRC does in war zones around the world. The organization is hoping to raise awareness—and donations—among Gen Z gamers, who might not know much about their work. More unexpected brands are getting into esports and gaming, but this isn’t the first time for ICRC—the organization previously collaborated with game developer Bohemia Interactive to create downloadable content for a video game which had players deactivate landmines in former war zones. (Front Office Sports)

Atari is building video game-themed hotels. Thanks to experiencification, retail hotels are a growing marketing trend, and Atari has unveiled plans for VR and AR-centric hotels in eight states with the first one opening this year in Phoenix. The hotels will reportedly have a “nostalgic and retro meets modern look” and feel like “stay[ing] inside an Atari.” A new venture from one of the OG gaming brands will appeal to Millennial nostalgia, but some locations will have facilities designated for esports events, to be even more appealing to today’s young gamers. (CNN, Uproxx)

YouTube is amping up competition against Twitch with exclusive livestreaming of esports events.

YouTube is amping up competition against Twitch with exclusive livestreaming of esports events. Thanks to a multiyear deal with Activision Blizzard, YouTube will now exclusively livestream esports events like Call of Duty League, Overwatch League, and Hearthstone—which up until now, used to stream on Twitch. While YouTube previously signed deals with gamer influencers, they’re now trying to “corner the marketplace” for streaming major esports leagues to capture their thousands and millions of young viewers: YPulse found that 40% of 13-to-36-year-old males have watched video gaming content live. (The Verge, Mobile Marketer)

A Nintendo theme park is coming to Universal Orlando.

A Nintendo theme park is coming to Universal Orlando. Comcast is powering into experiencification and merging it with young consumers’ love of gaming with a new 750-acre Orlando park opening in 2023 similar to the Super Nintendo World Osaka location opening this spring. The parks will offer rides, shops, and interactive experiences that will immerse attendees into classic Nintendo games—visitors will even receive wearable “power up” wristbands and download an app to collect digital coins—just like Mario himself. (Hypebeast)