NA versus WE: Who Are the Bigger Sports Fans? 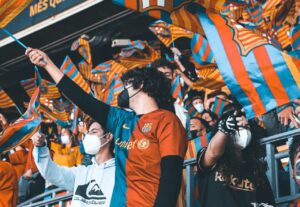 Looking at the sports fandom of North American and Western Europe young consumers, which region is repping their teams the most? Three charts tell it all…

Across gender and generation, YPulse research has long shown that the majority of young consumers consider themselves sports fans. But even before the pandemic, these gens were shaking things up for the sports industry: Gen Z and Millennials are watching far less live TV, are largely consuming content on social media, and are opting for video games instead of the live-action variety. These trends only grew during lockdowns, and at the same time, live sports were put on hold across the world, making it even more difficult—if not impossible—to draw in the next generation of sports fans.

Now the sports industry is back in action, YPulse’s more recent Sports and Athletics data shows that the majority of young consumers in both Western Europe and North America still consider themselves sports fans—and many are tuning in to live matches and streaming platforms to watch their favorite teams compete. But how do their fandoms compare? And are they watching their top sports in the same way? We have the story in three charts: 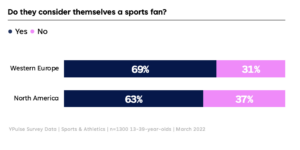 While their overall level of fanaticism is nearly the same, the sports they follow are much different—and say a lot about their specific brand of fandom: 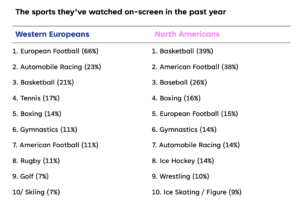 While young North Americans are split between basketball and American football, for young Europeans, it’s all about European football (i.e. soccer). Sixty-six percent of 13-39-year-olds in Western Europe have watched football on-screen in the past year, more than three times the amount that has tuned in to the next most-watched sport, car racing. While this is a pretty steep divide, it’s not too surprising: football is a huge part of European culture and has become intertwined with young Europeans’ identities. Meanwhile, viewership of the sport’s biggest event—the World Cup—far outpaces that of the Superbowl, the U.S.’s biggest sporting event, putting into perspective just how important this sport is. It’s also notable that young sports fans in Western Europe are far more likely to have watched their top sport on-screen in the last year compared to young fans in North America. And speaking of viewership: 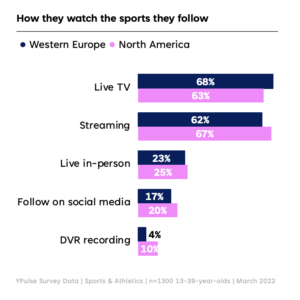 Streaming has officially surpassed live TV as the top way Gen Z and Millennials in North America are watching the sports they follow. But in Western Europe, they’re still tuning in live the most, beating out streaming by +6pts. In fact, 44% of young Europeans say that sports are the only reason they still have a TV subscription. But that said, live TV isn’t necessarily essential to their experience: the majority agree, “I don’t need to watch sports games live to keep up with what’s going on,” and streaming is clearly rivaling live TV, which shouldn’t be ignored. And though just 17% say they’re watching by following along on social media, the rise of social platforms as places to consume sports content shouldn’t be ignored either: TikTok has increasingly become the official sponsor of live sporting events over the past few years, and the platform has become a top place young Europeans turn for all things pop culture. In fact, memes/viral content (aka the sustenance of TikTok) is the third top type of pop culture moment young Europeans say they pay attention to—and number one for Gen Z—and it’s likely these next-gen sports fans will increasingly turn to their favorite platforms to keep up with their favorite sports.