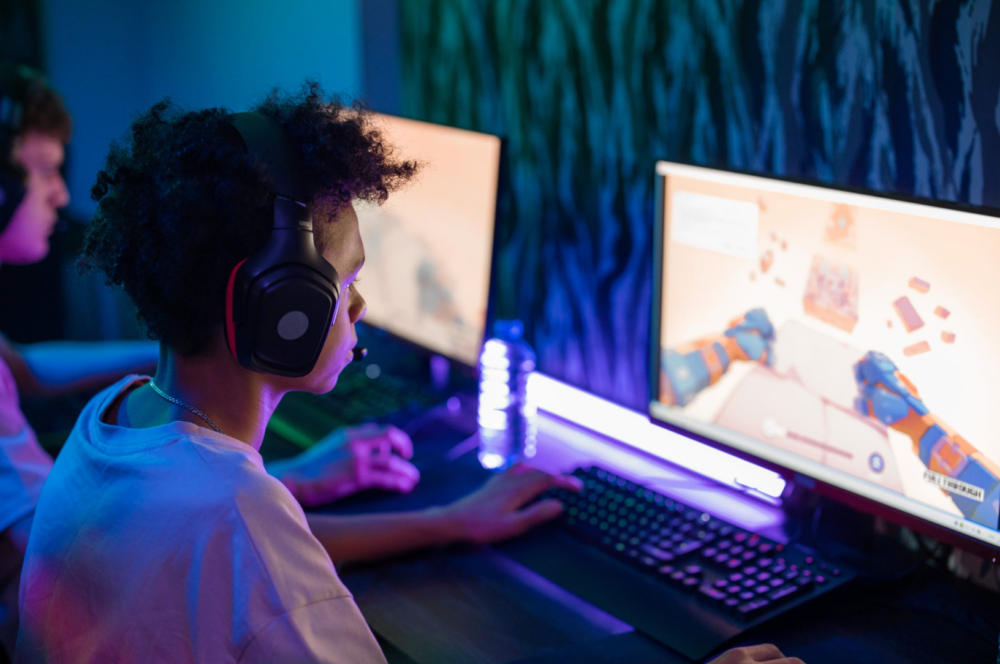 Esports are slowly starting to take over the sports world, but how many young consumers are watching?

YPulse has been talking about the importance of esports for some time. We’ve seen that esports entertainment has only been getting more popular with Gen Z and Millennials, as have the gamer influencers that create esports content. and we’ve tracked the sometimes surprising  brands that have been getting involved in the space.

Beauty brands have been strengthening their ties to the esports community, including Charlotte Tilbury, who held a beauty tutorial and masterclass with pro makeup artists on Twitch during the Girlgamer women’s esports festival, while NYX Professional Makeup recently became the office beauty partner of esports organizations Dignitas—marking the first time a global cosmetics brand has collaborated with an esports teams. As fashion brands infiltrate video games, Ralph Lauren teamed up with the G2 Esports team to dress them up in the luxury brand’s gear, Hollister just named its first-ever “gaming scout” and launched a new gaming training program, and Gucci is working on several partnerships with 100 Thieves to unite the gaming and fashion industries even more.

Most projections put esports on track to surpass $1 billion in revenue for the first time this year, while its revenue is expected to hit $1.8 billion by 2022, according to Newzoo. As the industry continues to grow, and potentially occupy more young consumers’ attention, our Scouting Next Gen Sports Fans trend research checked in on exactly how many Gen Z and Millennials are currently watching esports, and the overall appeal of this genre. Here are three stats that break it down: 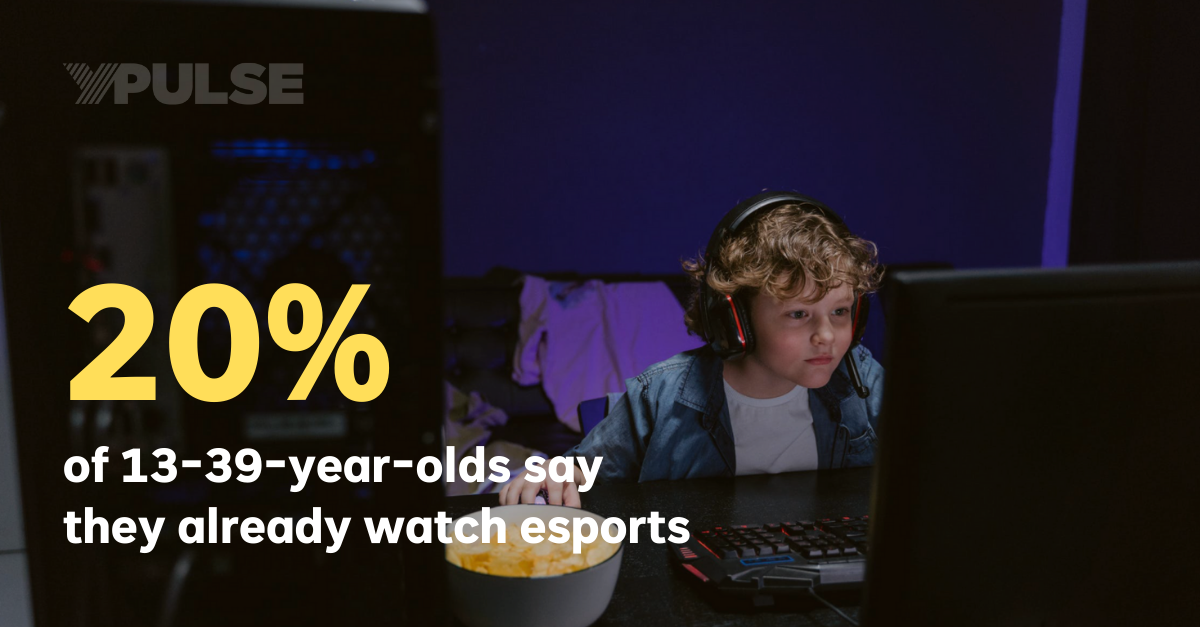 One in five young consumers watch esports.
Our trend data found that 20% of 13-39-year-olds already watch esports. This stat is, unsurprisingly, even higher among male, with 27% saying they watch esports compared to 12% of females. But even more young consumers could become esports viewers, with 25% of 13-39-year-olds telling YPulse they are interested in watching. Newzoo reports that esports viewership rose from 79 million users in 2018 to 92 million users in 2020, and the annual growth rate of esports viewership is expected to surpass 10% by 2023. To reach even more young consumers, esports media companies have been tapping into Snapchat’s gaming content. Esports news site Upcomer produced Livestream Fails and Rage Quit, two Snapchat Discover series rounding up noteworthy and amusing clips from Twitch/YouTube streams (Rage Quit drew more than 3 million views following its May release and the two series collectively amass 190,000 subscribers); FaZe Clan is producing personality-centric series like Challenge Sceptic and FaZe Fights for Snapchat’s Discover page; and Immortals Gaming is also creating Discover videos along with Wild Rift-themed Snapchat lenses with Riot Games. Meanwhile, YPulse’s data shows that 20% of BIPOC young people say  they watch esports, compared to 19% of White/non-Hispanic young people. To reach more diverse esports fans,Jay Z’s Roc Nation recently announced that they would be launching an esports division to create opportunities in the industry, including tournaments, live streaming events and gaming content, that would “pair with its traditional sports athletes and brands.” 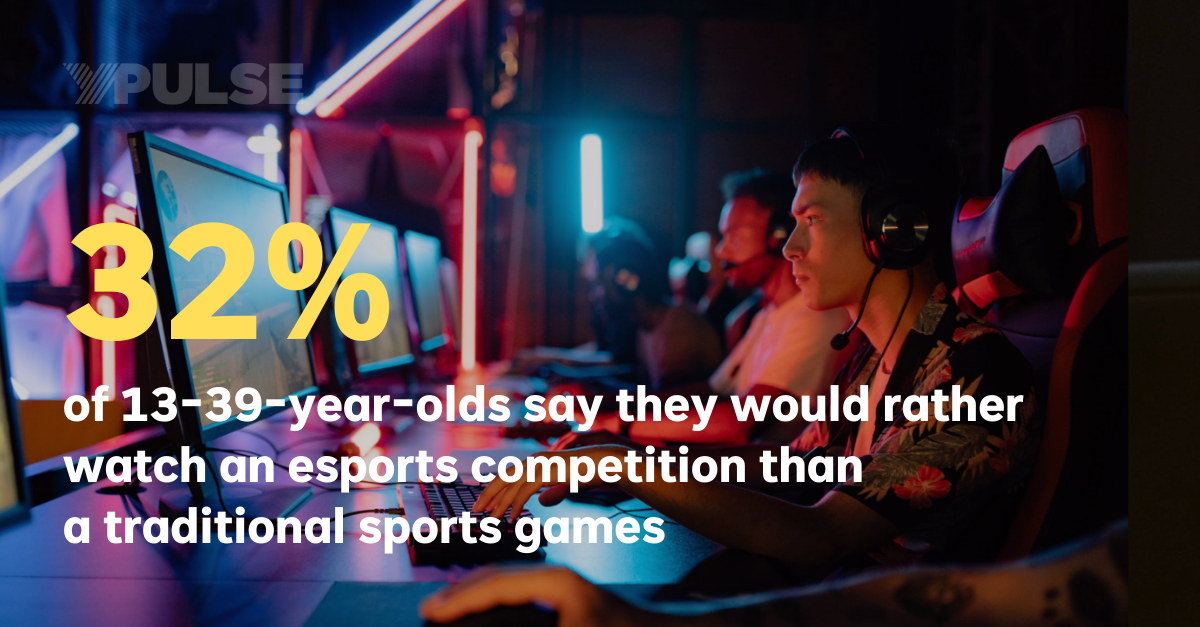 A third of young consumers would rather watch esports competitions than traditional sports games.
Esports is quickly changing what defines “sports” in today’s landscape. When we asked young people “Would you rather watch an esports competition or watch traditional sports (e.g. football, baseball, basketball, soccer, etc.) game?” 32% of 13-39-year-olds say they would rather watch an esports competition. YPulse’s Scouting Next Gen Sports Fan trend report found that despite the narrative they’ve abandoned sports, the majority of young people are sports fans, but clearly esports is mounting competition for their attention. Sports leagues have been tapping gaming in order to have crossover appeal: Pro athletes merged traditional sports with gaming during initial pandemic lockdowns, and to connect with sports audiences last year, Pittsburgh Steelers’ Juju Smith-Schuster launched Team Diverge, an athlete-led gaming entertainment and lifestyle company, and Green Bay Packers’ Marquez Valdes-Scantling created his own esports team with Subnation. The Green Bay Packers also hosted a live Call of Duty tournament on Twitch, and several other athletes opened Twitch accounts soon after, racking up subscribers. Meanwhile the International Olympic Committee (IOC) announced ahead of the Summer Olympics that they would be including a slate of five “virtual” events, including auto racing, baseball, cycling, rowing, and sailing. All of the sports were played as games, simulations, and digital programs, including Gran Turismo for auto racing, and Zwift for cycling. This addition was clearly just one step being taken to connect with Gen Z and Millennials—with the IOC’s President saying that The Olympic Virtual Series aims to engage “with new audiences…with a special focus on youth.” This was the closest the Olympics has come yet to including gaming in the events. 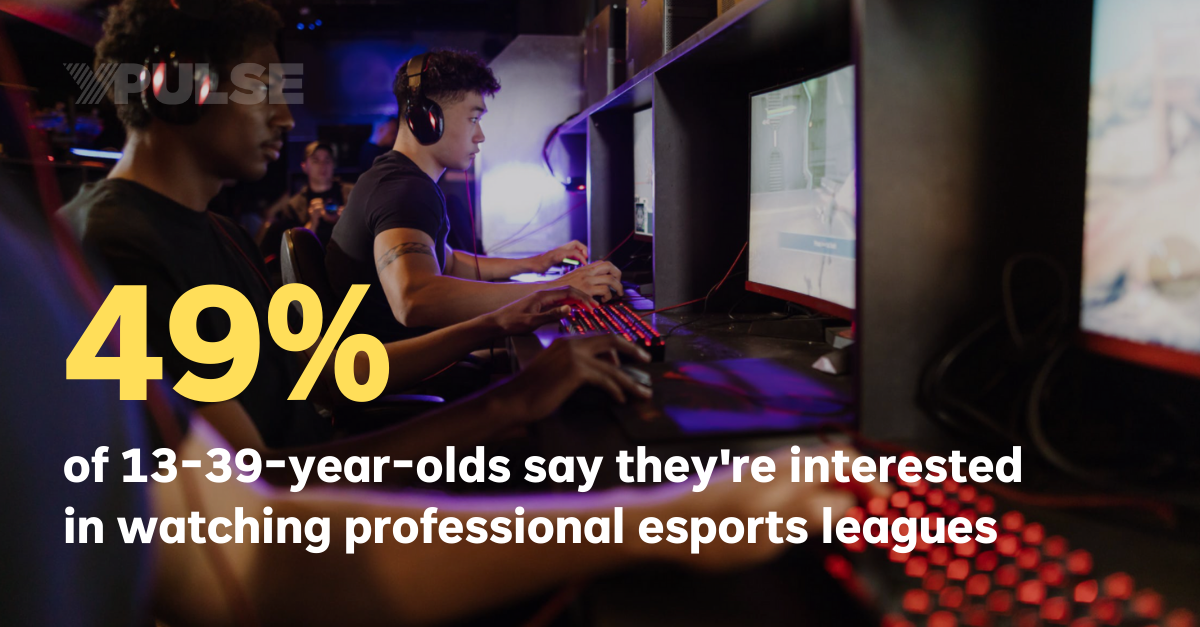 Nearly half of young consumers are interested in watching professional esports leagues.
While traditional sports leagues that are blending into esports, the industry’s professional leagues are already hugely popular. When we looked at Gen Z and Millennials’ top sports leagues, the League of Legends Championship, Major League Gaming, and Overwatch League made the top 15. Forty-nine percent of 13-39-year-olds say they’re interested in watching professional esports leagues, and 35% tell us they already have. To reach these growing audiences, esports companies have been finding ways to ramp up their tournaments. The FIFA 22 Global Series is just around the corner, and EA Sports announced that they would be hosting a FIFA 22 Challenge to bring some of soccer’s biggest stars together with the video game franchise’s “best competitors” in a one day, 2v2 tournament, while the League of Leagues World Championship is currently underway with live competitions taking place in Iceland. Starting with a double round-robin tournament, qualifying pro teams from across the globe compete for a chance to win part of a prize pool of $2,225,000. In League esports, Worlds is the biggest event of the year—and according to The Washington Post, it is “esports’ Super Bowl.” In recent years, professional leagues from Asia have dominated Worlds, with China winning the titles in 2018 and 2019. But last year, South Korea defeated them, and while the U.S. and Canada have never won a championship, Cloud9 is the only North American team to make it to the quarterfinals. Pre-pandemic, fans of the video game and the competition traveled to “splashy, Olympics-like event[s]” in cities around the world, which were full with elaborate productions that infused “innovative pregame celebrations” and “giant monitors inside massive stadiums,” but Riot Games scaled back its tournaments significantly by dropping live audiences in 2020 and 2021. However, the lack of in-person events doesn’t seem to have dampered young consumers’ interest in watching these competitions and leagues, and 26% even tell us they’re interested in competing in professional leagues themselves.