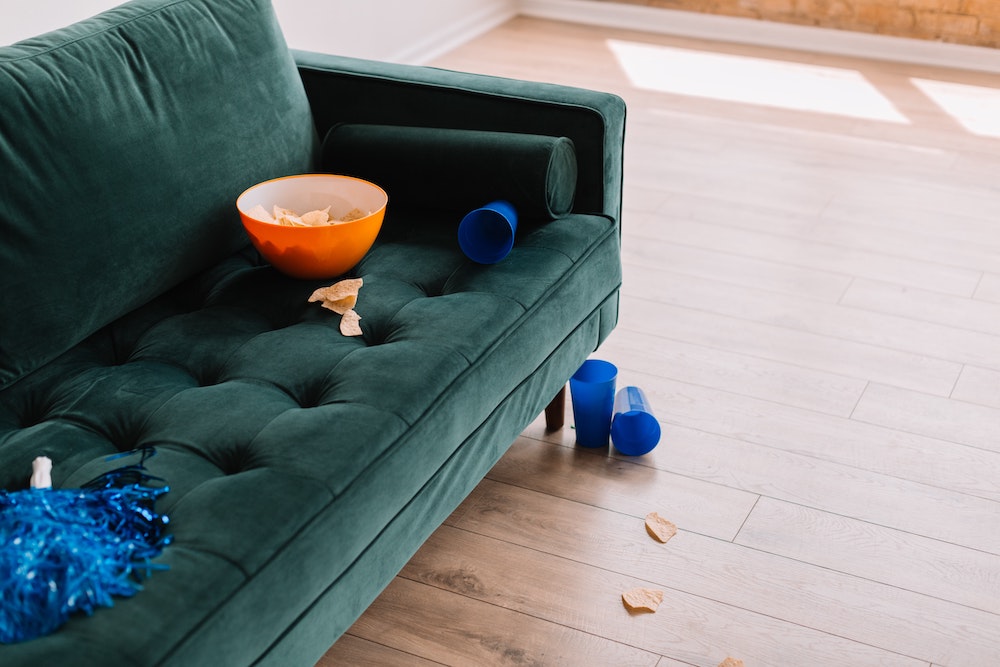 How many young consumers are going to watch the Super Bowl—and how will they be watching? Our on-demand survey reveals their most up-to-date plans…

Super Bowl LV is this coming weekend, poised to make history as the first (and hopefully only) big game to take place during a pandemic—which will, of course, have an impact on how consumers will be watching it. In past years, the major sporting event has been struggling to attract young viewers, as football in general has faced mounting competition for Gen Z and Millennials’ attention. While we found that roughly half of young consumers planned to watch the NFL this season, there is no question that leagues are looking to gain more next-gen fans. Last month, the NFL even teamed up with Nickelodeon for a kid-friendly game as part of a larger plan to “captivate a new audience of sports fans and football fans.”

But the Super Bowl will not be featuring SpongeBob cameos or slime-covered touchdowns. Still, with the pandemic dragging on and many looking for ways to break up time and for reasons to celebrate, could the game be an attractive distraction for young viewers this year? We used our on-demand survey platform PULSE to find out how many are planning to watch this coming Sunday:

Over half of young consumers 16-34-years-old say they plan to watch the Super Bowl on Sunday. While this is a majority, and aligns with the number who told us they would be watching the NFL this season, it’s not likely a number that will set young viewership records. Based on this forecast, we would predict that the number of young viewers won’t be skyrocketing this year. Brands who are continuing the trend of bringing Super Bowl marketing off the TV screen and onto social feeds are more likely to reach young consumers overall. The NFL is actually doing exactly that themselves: Marketing Dive reports that the NFL is teaming up with TikTok and Miley Cyrus for a tailgate event ahead of an “unusual Super Bowl” season. It will broadcasted live on a two-hour stream on TikTok, which will also feature exclusive video content, appearances from popular TikTokers, and a few surprise musical guests along with gameday cooking segments.

But for the 55% young consumers who are watching the game, live TV is the place to be:

The majority of young consumers who plan to watch the Super Bowl say they’ll be watching live on TV. Of course, many will be using their devices at the same time. In 2020, 32% of young viewers told YPulse they looked up information on another device while watching the Super Bowl. And in fact, when we used PULSE to ask young people who plan to watch the Super Bowl even more about their viewing plans, we found that a significant number already plan to have social media on hand during the game: 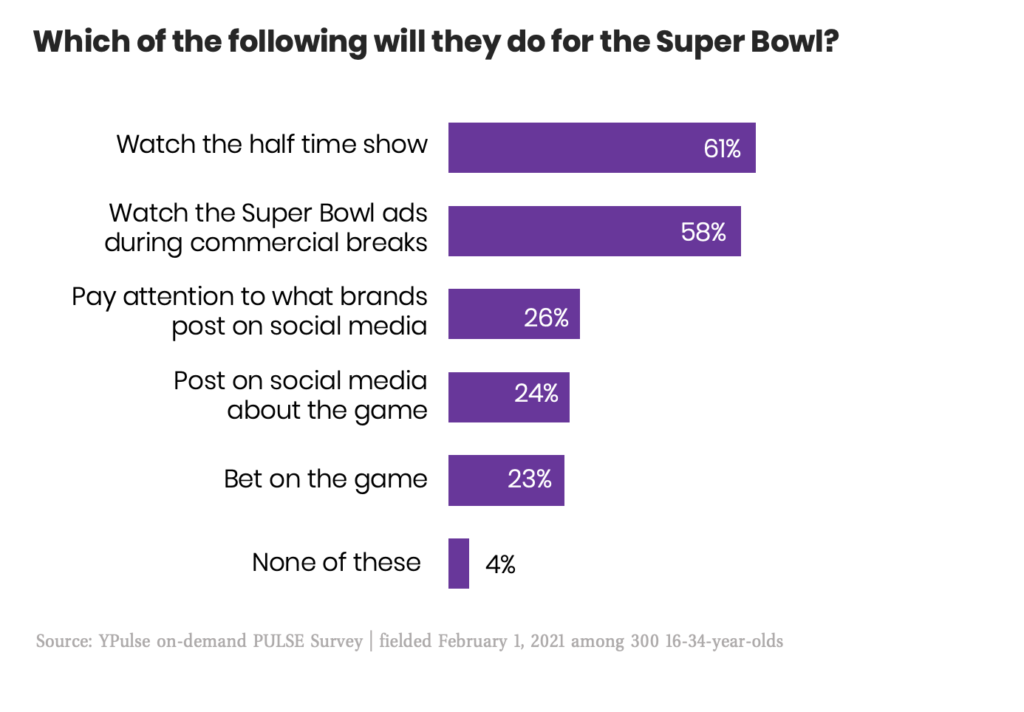 A quarter of the 16-34-year-olds who plan to watch the Super Bowl say they’ll be paying attention to what brands post on social media (so anyone looking for their Oreo blackout moment will have an audience) and a quarter also say they’ll be posting about the game themselves. Of course, if something significant happens, even more could be doing so. We also found that the majority of young Super Bowl viewers will be watching the half time show and the commercial breaks, aligning with past YPulse data that shows some are tuning in for these game features specifically.

But not surprisingly, most of this Super Bowl viewing will be taking place in their own homes:

But while they might not be spending out on the town, our PULSE survey found that the majority of young consumers who plan to watch the game do plan to spend to make at-home viewing an event: 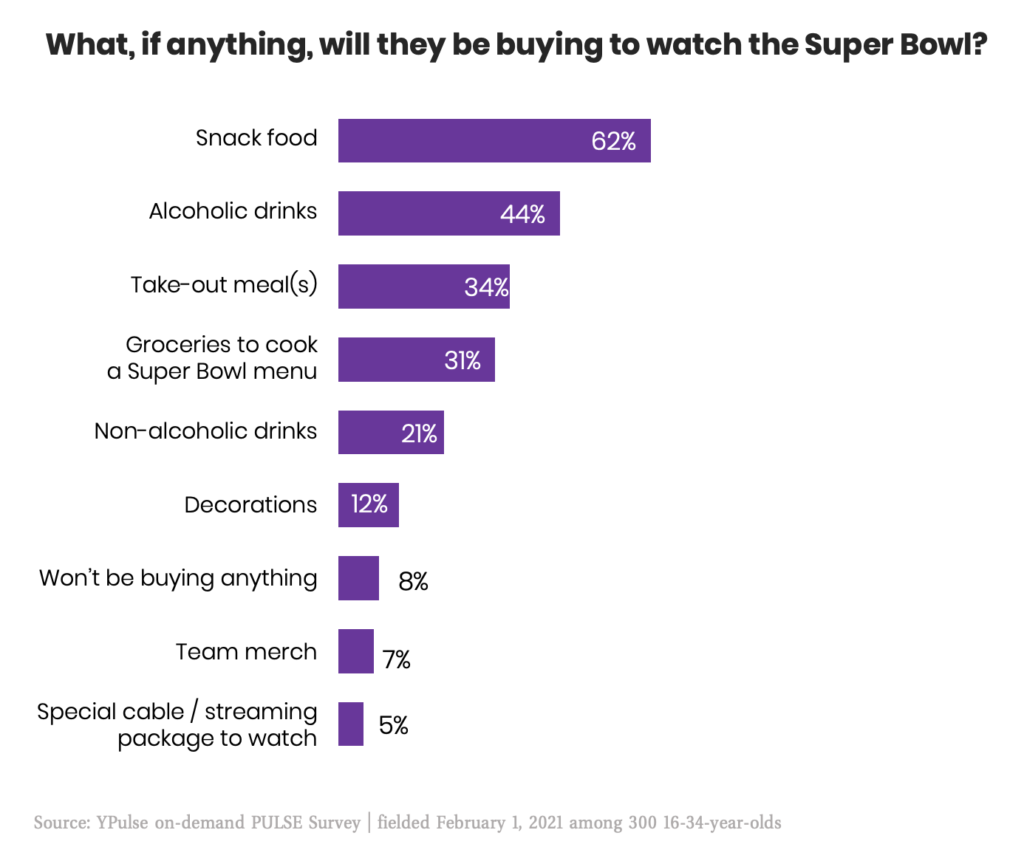 Only 8% of young people who plan to watch the Super Bowl say they won’t be buying anything to watch. Snack foods are the top category that young viewers plan to spend on, followed by alcoholic drinks, and take-out meals. With bar and restaurant viewing so uncommon this year, Super Bowl LV is perhaps the biggest opportunity for the to-go industry, though nearly the same number say they’ll be buying groceries for a Super Bowl menu, so game day recipes will also be in demand.

We also used PULSE to ask young consumers who plan to watch how their spending will compare to years’ past, and found that roughly half say they’ll be spending the same amount they usually do, and 15% plan to spend more. While young viewers aren’t the strongest Super Bowl demographic, those who plan to watch are clearly ready to buy for the event.