Valentine’s Day is coming up, and though young consumers have mixed feelings about the holiday, they’re still planning to spend…

More than half (55%) of 13-36-year-olds plan to celebrate Valentine’s Day next week, according to YPulse’s research. And while they might not all have stars (or hearts) in their eyes, their plans for the day do add up to a lot of spending.

Fifty-two percent of 13-36-year-olds plan to give someone a gift for Valentine’s Day, and they estimate they’ll spend an average of about $88—which means that these young consumers have over $5 billion in estimated spending power for this holiday on gifts alone. That’s not including their inevitable date night costs. Half of 13-36-year-olds, and 57% of 18-36-year-olds, told us they think they’ll be going on a date for Valentine’s Day. A date night also tops the list of gifts that young consumers say they’d like to get—typical of their experience-focused mentality. Last year, older Millennials were the biggest-spending age group on Valentine’s Day, according to the National Retail Federation. They found that 25-34-year-olds in the U.S. planned on spending an average of $202.76, compared to an overall average of $143.56—for a cumulative total of $19.6 billion. They were also 18% more likely than the average adult to gift an experience, instead of an item.

Our survey on their Valentine’s Day plans and preferences explored exactly what young consumers have in mind for the day—and with all that spending clout on the table, brands should know that they’ve got a somewhat non-traditional approach to the holiday. Yes, flowers and chocolate and cards are still mainstays, but their feelings about how Valentine’s should be spent, and who should be celebrated with, aren’t all about romance. Here are five stats that show that they’ve got their own take on February 14th that brands should take into consideration: 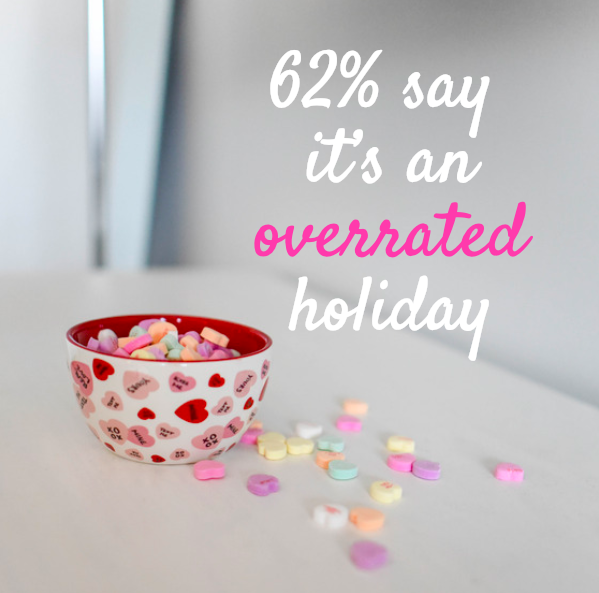 Over half might be celebrating the day, and buying a gift, but 62% think Valentine’s is an overrated holiday. Millennials are more likely to feel this way than Gen Z, with 64% of 18-36-year-olds agreeing with the statement compared to 52% of 13-17-year-olds. Only 25% say that Valentine’s Day makes them feel sad, and the majority don’t feel pressure to be in a relationship for the day—so it’s not necessarily that they’re bitter. Instead, these young consumers likely just aren’t interested in over-the-top romantic content. They’re celebrating for the fun of it, but aren’t interested in over-hyping their plans, or the importance of the event. That being said… 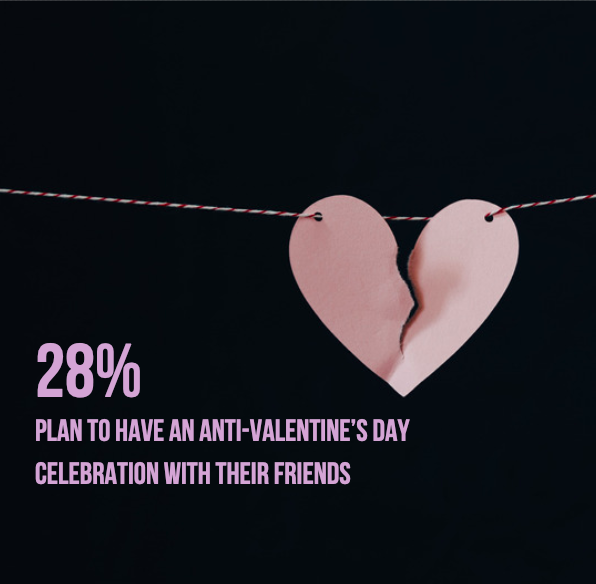 Over a quarter plan to have an anti-Valentine’s Day celebration with their friends.

There are some young consumers who are taking a more aggressive stance against romance and celebrating in their own way: 28% of 13-36-year-olds plan to have an anti-Valentine’s day celebration with friends. Males are actually more likely to be planning an anti-Valentine’s gathering than females. (Perhaps the ladies are too busy with Galentine’s Day?) Brands should remember that there is this segment of young consumers who could be reached with playful anti-Valentine’s messaging. A study analyzing keyword searches for GIFs on Valentine’s Day 2018 actually found that “alone” peaked on the holiday with 455% more searches than average, more than any keywords related to “love.” The most popular “alone” GIF of the day? A sad SpongeBob staring at a single cup of steaming coffee. 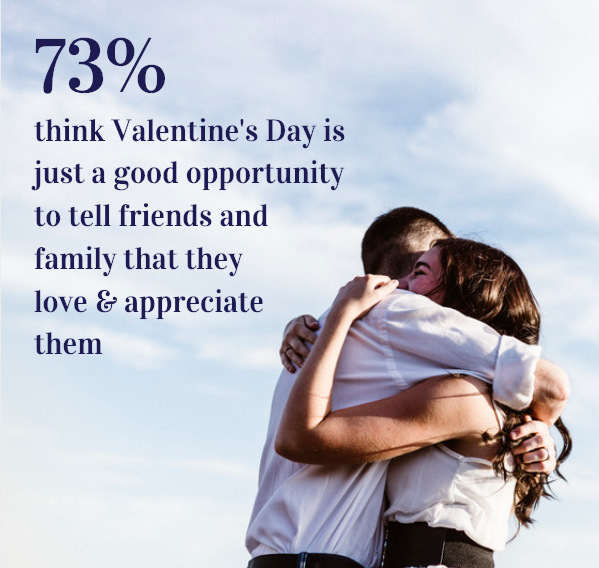 The majority think Valentine’s Day is just a good opportunity to tell friends and family that they love & appreciate them.

More evidence that an overly-mushy approach to the holiday might not be the way to capture this crowd: 73% think that Valentine’s Day is just a good opportunity to tell their loved ones that they care. When we look at who they’re planning to buy gifts for, significant other/spouse did top the list, but 23% of 13-36-year-olds plan to buy gifts for their friends, 21% for their moms, and 15% for their dads. Meanwhile, 38% of Millennial parents are planning to buy gifts for their kids. In marketing and messaging, brands should be sure to highlight all of the different relationships they might be celebrating, and give them gift ideas beyond their romantic partners. 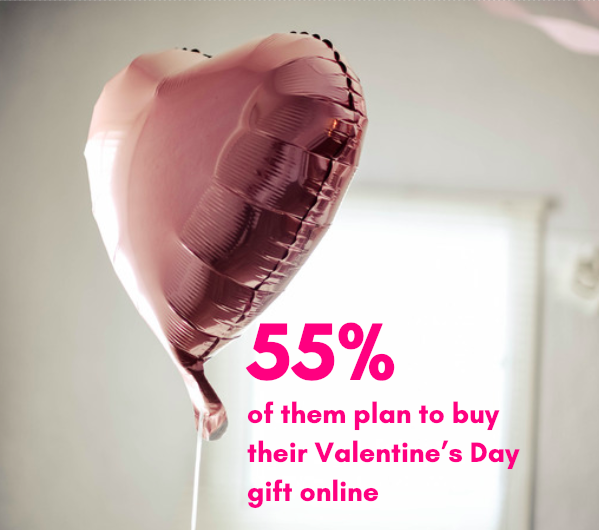 Over half plan to buy their Valentine’s Day gifts online.

So where are they planning to buy those gifts? Over half (55%) told us they’ll be purchasing their Valentine’s Day trinkets and treasures online, making it the top destination for Valentine’s shopping. Mass merchandise retailers followed, with 40% planning to shop there, and department and specialty stores were next on the list, with 19% of young consumers telling us they would shop at each. With chocolate, flowers, and candy the top three gifts they’re planning to give, you can expect retailers like 1-800-Flowers and online candy stores will be doing big business with these generations. 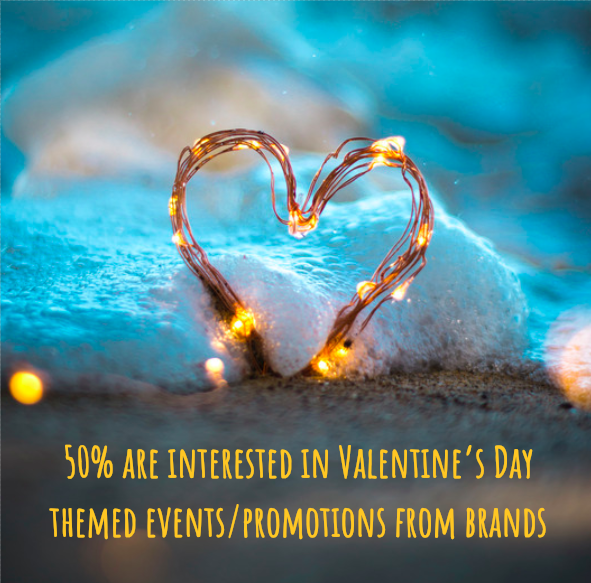 Half are interested in Valentine’s Day themed events/promotions from brands.

They might think the holiday is overrated and want Valentine’s Day to be about more than just romance, but 50% of young consumers are still interested in Valentine-themed events and promotions, so brands shouldn’t be afraid to lean into the holiday—it just needs to be done in the right way. Valentine’s Day messaging should be done with a wink and be inclusive of all the people they might be celebrating with.

North America
How Many Young Consumers Will Shop Black Friday & Cyber Monday This Year?
What do young consumers’ Black Friday and Cyber Monday plans look like this year? The a...
Western Europe
How Young Europeans Will Shop Black Friday and the Rest of the Holiday Season
Holiday celebrations may look closer to normal this year, but what about holiday shoppi...
North America
How Gen Z & Millennials Are Shopping This Holiday Season, In 4 Stats
The holiday shopping season is already in full swing—here are four stats showing how yo...