What Happened To “My Generation”? 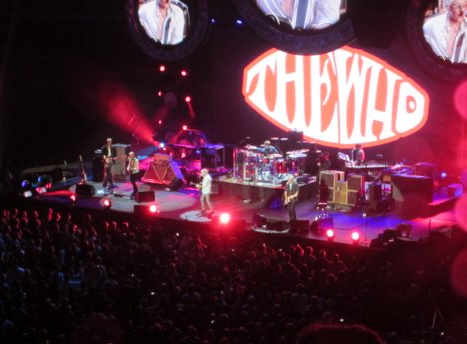 Pop and electronic dance music are favorites among Millennials, but what about rock ‘n’ roll and the infamous songs that their parents listened to? That’s what Caroline Marques, a music maven and one of our Youth Advisory Board members, wants to know after recently seeing The Who in concert. She was one of the few young adults in attendance, which left her wondering what songs will appeal to her generation as they get older and how the youthful pop anthems of today will maintain relevancy over time. Below she explores the typical music taste among her generation and why, in her opinion, classic rock, is timeless.

What Happened To “My Generation”?

Last month, I was lucky enough to see one of my favorite bands perform: The Who. They’re legendary, they’re timeless, or at least I thought so. I was thoroughly impressed to see them live. The venue, TD Gardens in Boston, was huge, and it didn’t matter that I was in the last row in the section furthest away from the screen. The concert was explosive, Pete Townshend and Roger Daltrey were rocking out, and the audience felt it. The Tour focused on their album “Quadrophenia”, but hits like “Baba O’Riley” and “Pinball Wizard” had everyone on their feet. While “Baba O’Riley” was intense, almost magical, my biggest disappointment was that for some reason, they didn’t play “My Generation”.

I was introduced to The Who, who have sold about 100 million records, by my parents. What surprised me at the concert was that instead of being surrounded by college kids my age, the audience mainly consisted of middle-aged couples and individuals. As I noticed that there were more five year olds than twenty year olds, I asked myself: What happened to my generation? I was not surprised when I attended a Pretty Lights (electronic music) concert on Halloween at the same venue and was surrounded by young adults. As much as I knew that Gen Y was the EDM generation, I still thought that good old rock ‘n’ roll appealed to them.

The iTunes list of best hits indicates that my generation is more interested in pop and rap than classic rock. Our anthems are no longer “Satisfaction”, “She Loves Me” and “I Can’t Explain” but  “Call Me Maybe” and “Never Say Never”. Of course, not all Millennials listen to those songs, but most seem to flock towards EDM and pop and ignore rock. Will these songs be considered classics in fifty years? Will some of the EDM DJs (David Guetta, Skrillex, and Avicii) who are popular today be touring when they are seventy and catering to Gen Y when they are middle-aged or older?

Bands today obviously try to cater to my generation. What I noticed at The Who concert was the impressive visual display organized between the band members, taking over huge screens. While I appreciated the lighting used to enhance the show, I thought the screens were a little much. While they sometimes displayed old grainy pictures and shots of waves that went with the music, they also showed unnecessary graphics and texts. It seemed too modern, too fitting with my technologically-savvy and computer-obsessed generation. The band seemed out of place amongst the huge screens, Celtics banners, and Budweiser posters. Of course, I wish I had seen them in the sixties or seventies, back when they had reached their peak.

Instead, I can experience EDM at its peak. And I do enjoy that particular style of music and the events that accommodate it. EDM concerts bring a whole new ambience and set of feelings to the table. But hopefully EDM will not obliterate rock and other genres that have dominated the music scene for years. In my opinion, it is time to bring “my generation” back and have Gen Y see the light, so that The Who’s many stunning songs will not only be known as our parent’s favorite songs, but as our hymns as well.

Caroline is a freshman at Wellesley College. This year will be her fifth year serving on the Youth Advisory Board, which she loves, as it allows her to keep up with a lot of U.S trends and do what she loves the most: write. She spends her time trying to master several languages, traveling, kick-boxing and enjoying music and dance, as well as her two favorites: reading and writing.