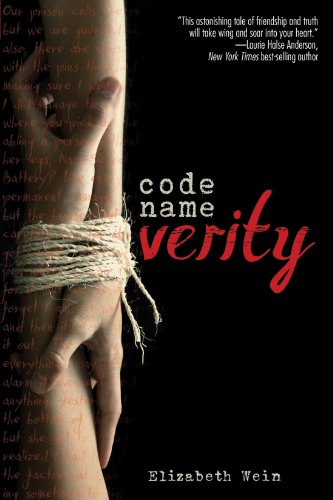 When Code Name Verity crossed our desks at Ypulse, we were immediately intrigued because it’s not a typical YA novel — hint, no paranormal creatures or supernatural powers or young love…well, not exactly. Elizabeth Wein’s novel is a complicated tale of two very different, very smart young women who become fast friends during the turmoil of World War II as both find ways to serve their country — an opportunity that was very limited for women at the time. At the novel’s opening, we learn that Verity has been captured by Nazis in France and must write down all she knows about England’s war efforts. As she tells her tale, we learn about Maddie, a brave young pilot and her best friend. An intense story follows as the reader learns more about the girls, their lives, and their secrets — as well as the lives and secrets of those around them — until finally the unexpected truth is revealed.

We spoke to Wein about her inspiration for the book, writing a historical novel amid a flood of supernatual and distopian fiction, and how she builds the non-stop tension that had us riveted to the page.

Ypulse: We’re seeing a lot of historical YA fiction lately, a genre that you’ve explored covering many time periods. What draws you to it, and what do you think draws young readers to it?

Elizabeth Wein: For me, originally, it was a fascination with time travel and with the past — a longing to be able to experience the past myself. Nostalgia comes into it. You know, I didn’t make this connection until you asked this question, but my “first novel” (210 notebook pages written by hand when I was eleven) was about time travel, and I guess that is essentially my first venture into historical fiction! It was set in my hometown in Pennsylvania, partly in the present and partly in Victorian times.

As a trained researcher, I try discover what really did happen — the truth. But as a fiction writer, I get to speculate about what might have happened, and make connections that might have been there but aren’t proven, and play with those ideas. Kind of like the Renaissance Faire where I worked one summer whose theme was a face-to-face rivalry between Mary Queen of Scots and Elizabeth I. They never met in real life, but wouldn’t it have been cool if they had? Riveting historical fiction plays with possibilities. Rosemary Sutcliff’s Eagle of the Ninth (a touchstone novel for me) is the perfect example. What really happened to the lost 9th Roman Legion? Sutcliff made it all up, but it makes a great story, and is historically plausible.

YP: What led you to write about WWII?

EW: Two things came together in Code Name Verity — my fascination with aircraft and a long-standing fascination with World War II. I ate up Holocaust literature when I was a pre-teen. Twenty-five years later, about a month after I got my own pilot’s license, I wrote a short story in which a girl disguises herself as her dead brother and becomes a Spitfire pilot in the Battle of Britain (“Something Worth Doing” in Firebirds Soaring, edited by Sharyn November). I remember thinking how ironic it was that when I finally wrote a World War II story it was all about air battles — something I hadn’t been very interested in as a pre-teen! “Something Worth Doing” was the seed for Code Name Verity. The heroine of the short story makes a cameo appearance in the novel. It was in doing the research for “Something Worth Doing” that I discovered both the ATA (Air Transport Auxiliary) and the SOE (Special Operations Executive), British wartime organizations who employed women pilots and spies. The threads all came together in Code Name Verity.

YP: You cover some very serious themes — torture and families divided by war — amid a very touching story of two young women becoming friends. Were you worried that the sensitive subject matter would scare away some readers?

EW: I didn’t think about it. I just wrote the story I wanted to write, and I feel I have a responsibility not to sugar coat things that really happened. My books have always been harrowing, and to tell the truth, “torture and families divided by war” would be a good catch-all description for them. What I’m seeing now is that readers aren’t scared away by the torture, but a few of them do run the other way when they come across terms like “radial engine” and “aileron.” I promise never to describe Bernoulli’s Principle in fiction!

YP: There isn’t a dull moment in the book. In fact, at times it was so intense that we had to stop to take a (very brief) pause before plunging back into the story. Do you think that novels for teens have to be packed with action to maintain reader interest?

EW: I think that teens — indeed, most modern readers, not just teens — have come to expect their novels to be packed with action. I’m also of the highbrowed opinion that this usually comes at the expense of literary style. But there’s no reason why that needs to be the case, except that it’s very difficult to write a stylish novel when you’re cranking out fast-paced action to a deadline.

For me as a writer, some of the most satisfying scenes to write are what I call “decompression scenes” — like Maddie’s hot bath after the battle at the bridge. I like to give the reader, as well as my characters, a quiet pause to readjust after a particularly intense action sequence. It’s possible to pack a lot of emotional impact into a quiet scene — hence the feeling of non-stop tension.

YP: The two young women in your story are very different but get thrown together in desperate circumstances — what inspired you to depict them that way?

EW: Their backgrounds were actually limited by my own experience. I made Verity upper class because I wanted her to be highly educated, simply for my own convenience. It made her easier for me to write because I could draw on my own literary background and vocabulary. Her “Swiss finishing school” was purely a good excuse for her to speak German. And then because I’d made her an aristocrat, I figured I’d make her Scottish because I live in Scotland, and her family and estate background would also be easy to describe (and a little unusual).

Then when it came time to think about Maddie, I made her a Stockport lass because I used to live in that industrial part of England and I’d be able to write convincingly about it too.  Because she was going to be the pilot character, I thought I’d give her a mechanic’s background — hence the grandfather who sells motorcycles — and suddenly everything about Maddie was ordinary. So the class differences fell into place as I was writing. I didn’t actually intend it to be such a key part of the story, but in the UK it is really noticed as one of the story’s great themes. I think people in the UK are still much more sensitive about class issues than we are in the US.

As for Maddie’s and Verity’s personal differences, their character differences — Verity being a flirty fearless show-off and Maddie being more methodical and honest and interested in other people — I just liked contrasting their personalities yet making them click. All the time I was writing Maddie I’d find myself exclaiming aloud, “Maddie, you are just SO NICE!”  She is the nicest character I have ever invented.

YP: At a time when YA novels are flooded with the supernatural and fantasy, is there still room for realistic stories?

Absolutely! Not only is there room for them, I think avid readers often find them refreshing. It comes as a surprise that there can be just as much room for adventure and excitement and heroism in the real world. In fact, one of the reasons I don’t write fantasy is because I feel it’s so important to show how fabulously fantastic and fascinating the real world is (not to mention dystopic — holy cow! — I’ve yet to come across a fictional dystopia as frightening as the Third Reich, or supernatural beings as scary as the Gestapo).

YP: We loved that you included several additional resources on your website and in the book for knowledge-hungry Millennials, including knitting and sewing patterns for items mentioned in the book. Do you feel that these real-world artifacts help young readers connect with historical novels?

EW: I really hope so! I don’t have an agenda here — I’m not trying to teach a lesson, but these are all things that I loved discovering while I was researching, and I just want to share the joy!  (The ballpoint pen obsession became pretty ridiculous at one point. I’ve got hold of a couple that date to the early 1950s.) Certainly these real-world artifacts helped me connect with the past, and part of what I love about them is dragging them into the present. I used my 1940 silk escape map to follow our progress on a commercial flight to France.  The map still works, 70-some years later. The pens don’t, but you can fix them with modern refills. I sit there thinking, “Who wrote with this pen, half a century ago?” What did they write? I love these real and tangible connections with the past. I share them because I love them, not as a gimmick to try to get people to read historical novels.

YP: We like to end all of our Q&As with the same question: What’s one thing that the world needs to understand about this current generation of young people?

EW: The current generation knows how to communicate. You can’t hide anything from them and you can’t silence them. Unlike the wireless operators in Code Name Verity, today’s young people have voices they can broadcast instantly anywhere in the world. I don’t think this necessarily makes them happier or more complicated than previous generations, but it gives them more force. A great example is nine year old Martha Payne, who sprang to international fame last month because she kept a blog about her school lunches! No one in my generation could have done this when we were nine years old, even if we’d wanted to — we didn’t have the tools. This kid didn’t mean to cause such a sensation. Young people today have power at their fingertips and a voice that no one has ever had before in all of history. My plea to everybody is to use that voice wisely!